"On the one hand you have Abbott wanting to throw goats into volcanoes. On the other, you have Malcolm Turnbull trying to put lipstick on a pig.”

The Turnbull Government has formally abandoned the idea of a Clean Energy Target (CET), proposed by Chief Scientist Alan Finkel and endorsed by nearly everyone, in favour of a new policy that will protect fossil fuel generation and slow down the uptake of renewable energy.

The new National Energy Guarantee (NEG) marks a major switch in government policy — at least on the face of it. But the major problem is, we just don’t know because there are so few details.

But it appears to hand extraordinary market power to the country’s big utilities and fossil fuel generators, and gives no obvious incentive to introduce new generation, which one would expect would be the key to lowering prices.

Dumped is any form of visible subsidy scheme – be it a renewable energy target, or a carbon price, or clean energy mechanism – in favour of changes to energy market rules that put an additional burden on retailers for a “reliability guarantee” and an “emissions guarantee”.

But these guarantees can also be traded — in the form of contracts between utilities. Potentially, it will generate credits in dirty energy, as this table illustrates: 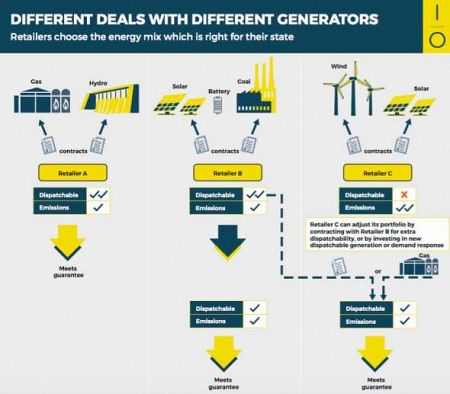 Quite how this works is not clear and energy participants were struggling to get their heads around it. They may struggle for a while because the levels of these reliability and emissions guarantees have not been set, and the reliability settings will vary from state to state, depending on their level of wind and solar.

Western Australia, for instance, has been ignored and is not part of the plan, because it only applies to the National Electricity Market (NEM), which excludes WA.

It also appears that retailers may be able to satisfy their emissions guarantee through international carbon markets. One thing is certain, the Turnbull Government has undertaken not to go any further than its current Paris target of a 26-28% reduction by 2030 — and that is a blow to renewables.

This appears to be the minimum demand of the Coalition’s right wing and is, in effect, an abrogation of the Paris Climate Treaty, which is to make all efforts to keep global warming well below 2°C.

The impact on the renewable sector is hard to predict, but it is clearly not good. Modelling for the Government suggests that the share of renewables in total generation will be 28-36% by 2030 — and the level of wind and solar 18-24%.

This compares to a level of 42% suggested by Finkel, Labor’s 50% target and the 70% deemed necessary if Australia was to get serious about meeting the international 2°C target.

This new modelling represents only a modest increase in renewables – and possibly a virtual stop – particularly if it includes behind-the-meter rooftop solar, which it appears to do. If it does represent some sort of target, then it could likely bring new large-scale development of wind and solar to a halt.

Minister for the Environment and Energy Josh Frydenberg said that the current renewable energy target will remain unchanged but noted that it already appears to be “95%” accounted for from projects being built, about to start construction, or having reached financial close.

The initial reaction from green groups and renewable energy proponents – that this was a devastating blow to the sector – appear to have been based on an incorrect report in The Australian, which suggested that modelling applied to renewables in 2050, which would have been a disaster.

But it still may not be good.

The fact that this proposal comes from the Energy Security Board (ESB) also raises some questions. Finkel took nearly a year to put together his review and his painstaking modelling of a clean energy target.

The ESB, chaired by Kerry Schott, and including the heads of the AEMC, AEMO and the Australian Energy Regulator (AER), was formed less than two months ago and only had its first meeting four weeks ago.

Little wonder the details are so vague. Apparently, it was delivered to the Federal Government last week. Investors may be mindful of Schott’s comments a few weeks ago: harnessing demand management in Australia, means “we can all stop worrying about building new plants of any description”.

The other issue about the ESB is that it is required only to look at the issue of energy security, not emissions. It appears to have been given the arbitrary number of electricity accounting for one-third of anticipated emissions reductions by 2030. Who is going to do the rest?

But the involvement of the ESB has provided Prime Minister Turnbull with an element of political cover, saying that he was relying “on the real experts”. Indeed, at the press conference, he refused to answer any question in detail, deferring instead to the members of the ESB.

Minutes later, in Question Time, it was obvious that the political rhetoric hadn’t changed. Quoting complete nonsense from The Australian and other conservative commentators, Turnbull claimed that the renewable energy target would cost $66 billion in renewable energy certificates — a cost imposed on consumers.

It’s rubbish, of course. Most new projects ascribe no value at all to those renewable energy certificates.

And it is this that raises concerns. The conditions of the rightwing rump of the Coalition, which have been holding the Government – and the nation – hostage to their demands, were laid clear by Member for Hughes Craig Kelly, the climate change science denier who acts as chair of the Coalition’s environmental committee.

Kelly says the target must not allow renewables to get near 50%, and must not go further than the 26-28% committed by the Abbott Government — and certainly not the 45% emission cuts recommended by the Climate Change Authority and other climate scientists, and endorsed by Labor.

In other words, it wants Australia to tear up its Paris climate commitment to keep global warming well below 2°C and possibly as low as 1.5°C.

The Federal Gov't has binned the Clean Energy Target, as well as Federal climate action by going backwards on the Paris Agreement #auspol. pic.twitter.com/rHsOSd4tpc

The ESB advice letter says a rule change for the reliability option will be brought in by 2019 and for the emissions obligation by 2020. It says that the scheme could still be compatible with state-based targets.

The ESB is proposing the development of an obligation on retailers to meet a percentage of their load requirements with flexible and dispatchable resources, that is, resources that can be scheduled by the market operator depending on the real-time operating needs of the system.

This would allow both new and existing generation to meet the dispatchability requirement, and provide a greater incentive to maintain existing plant which is necessary for the secure and reliable operation of the power system.

The resources which comply with the system needs would be carefully defined and include any form of technology, generation, batteries and demand that can respond to a request by the operator to increase or decrease their output over a defined time interval.

It says this reliability guarantee would require retailers to hold forward contracts with dispatchable resources that cover a predetermined percentage of their forecast peak load:

The amount and type contracted would be based on the system-wide reliability standard as determined by the Reliability Panel at the AEMC. AEMO, in consultation with the Panel, would then determine how the NEM standard is translated into an operating requirement for each region.

Interestingly, the operators of renewable energy plants – coupled with some form of storage – will be relegated to only the short-term hedge market, “since their availability is generally not known until near to the delivery day”.

In other words, market power remains with the big generators — the very ones that have been dudding consumers on retail and wholesale costs for the last few years. The ESB modelling effectively locks in the recent high prices, offering only an 8-10% fall over the next decade.

BREAKING: @samanthamaiden has already exposed Turnbull's energy 'plan'. This plan all about keeping him in power, not lowering power bills. pic.twitter.com/K9BpJJ0oV5

The ESB says this may translate into consumer savings of some $100 a year – over a ten year period – over and above the Finkel Review. But it is not clear how if the wholesale savings are so small.

To get some idea about how this will be received, One Nation declared its support and claimed some responsibility, for the new policy, which was readily endorsed by the Coalition party room on Tuesday.

Others were not so sanguine. It was slammed by Labor and the Greens, who said it was a clear sign that the Tony Abbott faction had won the energy debate. The Clean Energy Council said it was an opportunity lost and would be bad for the renewables industry.

“This is a complete victory for the coal industry. Malcolm Turnbull has demonstrated his complete inability to stand up to vested interests and for the public good.”

Australia joins Donald Trump’s United States as one of only two major national governments to remove support for investment in renewable energy and redirect it to ageing and polluting power stations.

If the Prime Minister’s plan were implemented, the highly successful national renewable energy target would end in 2020 and Australia would have no real plan in place to achieve its Paris climate change commitments.

While the devil is often in the detail of major new policies, in this case the devil is in the central idea that electricity retailers will be forced to buy power from old and polluting coal-burning power stations.

We urge state governments and other political parties to reject the Coalition’s ill-conceived plan for polluters.

Instead of acting in the interest of 24 million Australians, the Turnbull government is designing energy policy for about ten people sitting on the Coalition backbench.

John Grimes, from the Australian Solar Council, said the plan was dumb:

"... dumb, in terms of economics and dumb in terms of science. On the one hand you have Abbott wanting to throw goats into volcanoes. On the other, you have Malcolm Turnbull trying to put lipstick on a pig.”

This article by Giles Parkinson was originally published in RenewEconomy and has been republished with permission. You can follow Giles on Twitter @GilesParkinson.