The CSG industry is campaigning to persuade convince the public and policy makers that CSG is safe and its expansion is in the public interest, however according to research by Dr Richard Denniss from The Australia Institute (via The Conversation), these claims are often exaggerated or based on outright falsehoods.

COAL SEAM GAS has an image problem — as a former Santos chairman and others in the industry have acknowledged.

The way the industry extracts natural gas from deep underground coal seams, both here and overseas,  as meant that a lot of people have a lot of questions about CSG’s safety and sustainability, particularly in relation to its effects on people’s health and that of the natural environment.

Faced with wide-ranging criticism of mining practices and lack of transparency, the CSG industry has launched a campaign to convince the general public and policy makers,that it’s in Australia’s national interest to allow an expansion of CSG.

They have concentrated their efforts on three ideas:

But according to our new report – Fracking the Future, published last week – those claims are often exaggerated and are sometimes based on outright falsehoods.

Myth 1: The gas industry is a big employer

“We all realise natural gas projects would benefit the entire nation, increase our GDP by an estimated 1.5% and directly and indirectly create 150,000 new jobs – this is in addition to the 100,000 jobs created by our gas industry last year alone.” ~ Australian Petroleum Production & Exploration Association (APPEA) deputy chief executive Noel Mullen (July 2013).

However, the reality is that the CSG industry is currently so small that the Australian Bureau of Statistics does not publish separate employment figures for just CSG or for the gas industry as a whole. Rather, the ABS only publishes data on the combined size of employment in the oil and gas industries.

According to the ABS, in November last year, the combined oil and gas industry employed 23,200 people. To put this in context, hardware chain Bunnings employs around 36,000 people.

Yet in that same year, the ABS found that the whole oil and gas industry had increased its employment by only 9,372 people.

One of them is way out.

In total, the gas industry employed 0.2% of the Australian workforce in 2012. 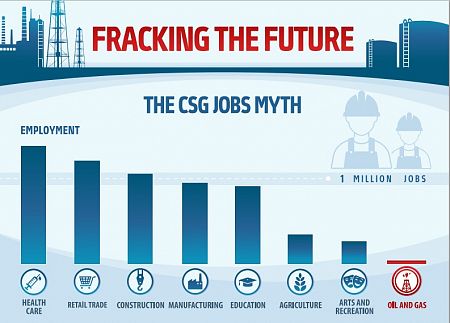 One of the biggest claims that some CSG companies and peak body APPEA have been making is that an expansion in CSG extraction can stop gas prices from rising in the eastern parts of Australia.

This claim completely misrepresents why gas prices are rising. Put simply, because the world price of gas is much higher than the Australian domestic price, the gas industry would prefer to sell gas to foreigners than keep selling it to Australians.

Previously, they had no way of exporting Australian gas extracted on the east coast, but three big export facilities will soon be ready for business in Gladstone, Queensland. When these export facilities are completed, gas producers on the eastern side of Australia will have a choice. They can sell gas to domestic customers or to foreign customers. And they will pick which customers they sell to based on price.

These export facilities are being built by the gas companies and are part of their plan to expand production and increase prices, something they have been telling their shareholders for years.

When the export facilities are complete, if domestic gas consumers want natural gas they will have to be willing and able to pay the equivalent of the price the gas companies will receive from Asian customers. At the moment that is two to three times more than the recent wholesale price.

Once connected to the world gas market, the only things that can change the domestic price will be things that change the world price. If more CSG is extracted in Australia this is not going to have a material effect on the world price and in turn will do nothing to reduce the price paid by consumers. Some gas companies have admitted this but others try to pretend that it’s not the case. 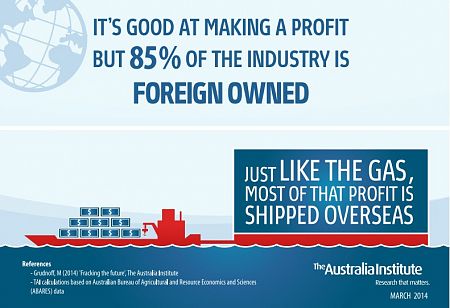 Myth 3: CSG can act as a low-emission “bridge” from coal to renewables

“Natural gas can help reduce greenhouse emissions, both here in Australia and across Asia, because it is so much cleaner than traditional sources of energy.” ~ APPEA’s Our Natural Advantage website.

While it is true that when it is burnt for generating electricity natural gas does produce fewer emissions than burning coal, not all sources of natural gas can be treated similarly. Unfortunately for those interested in reducing greenhouse gas emissions, the way CSG is extracted can substantially reduce its potential emission reduction benefits.

When CSG is extracted it leaks out of the ground, particularly when using hydraulic fracturing or “fracking”. These are known as fugitive emissions and are an extremely potent greenhouse gas, up to 86 times more potent than carbon dioxide.

The amount of fugitive emissions that are produced during the CSG extraction process is currently unknown: no systematic study has been done in Australia. But in the United States, studies on shale gas – which like CSG is known as an unconventional source of natural gas – have found that fugitive emissions rates are substantially higher than conventional natural gas. If the CSG industry wants to be taken seriously, it would do better not to exaggerate its economic benefits and downplay risks to human and environmental health, and begin addressing genuine community concerns.

This article was co-authored by Matt Grudnoff, senior economist at The Australia Institute, who was the lead author of the new CSG report and was originally published on The Conversation. Read the original article.