Hiatus? What hiatus? Scientists show no slow down in global warming

American scientists re-examine the collection of data that seemed to show global warming slowing since 1998 and conclude that temperatures have continued to rise steadily without a pause. Tim Radford from Climate News Network reports.

FORGET ABOUT the so-called “hiatus” in global warming. The planet’s average temperatures are notching up as swiftly now as they did 20 or 30 years ago.

A team of U.S. researchers has looked again not just at the data for the last 60 years, but at how it has been collected and done the sums again.

They conclude, in the journal Science, that the

'... estimate for the rate of warming during the first 15 years of the 21st century is at least as great as the last half of the 20th century. These results do not support the notion of a ‘slowdown’ in the increase of global surface temperature rise.'

But first, the story-so-far. Climate sceptics have repeatedly claimed that global warming has slowed or stopped. This was not the case: 13 of the hottest years ever recorded have all occurred in the last 14 years and 2014 was the hottest of them all.

This apparent dip became the subject of a whole series of studies. Researchers had never expected the rise to follow a straight line – all sorts of natural climate cycles would naturally affect annual records – but the rate of increase was slower and more sustained in its slowness than anyone could explain, especially as there had been no drop in the greenhouse gas emissions that drive global warming. 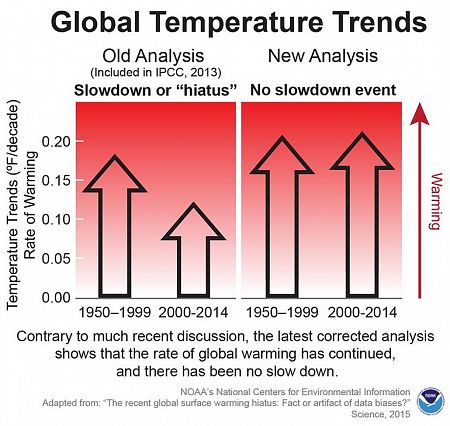 Some proposed that the expected extra heat in the atmosphere had been drawn down into the great oceans and others that an unnoticed increase in volcanic activity had helped screen the sunlight and cool the atmosphere unexpectedly. Another group looked not at average temperature patterns but the change in the frequency of heat waves and saw a different kind of rise.

Yet another group wondered if the problem might be only apparent: more complete data from many more parts of the world might combine to tell a different story. Thomas Karl and colleagues at the U.S. National Oceanographic and Atmospheric Administration made this their starting point.

They looked again at how the data had been collected and the gaps that might have appeared. Sea surface temperatures, for instance, were at different periods collected by bucket from a ship’s deck, by readings aboard surface drifting and moored buoys or by engine-intake thermometers in ships’ engine rooms and there could be subtle differences not accounted for.

There were very few readings from the Arctic, yet the Arctic is by far the fastest-warming region of the planet and the pattern of land-based temperature readings, too, repaid re-examination.

By the time the NOAA team had finished, the recalibrated figures told a different story. Between 1998 and 2012, the world warmed at the rate of 0.086°C per decade — more than twice the rate of 0.039°C per decade measured by the Intergovernmental Panel on Climate Change.

British climate scientists have welcomed the finding; it is, however, the finding of just one group and, like all such research, will be accepted more readily if it can be separately replicated.

“This study makes the important point that we need to look really carefully at data quality and issues of instrument change,” said Piers Forster, professor of climate change at the University of Leeds, UK.

"Yet there are several legitimate judgment calls made when combining datasets to make a global mean-time series. I still don’t think this study will be the last word on this complex subject.”

But Peter Wadhams, a professor of ocean physics at the University of Cambridge, UK, called the study careful and persuasive, and said:

“I think it shows clearly that the so-called ‘hiatus’ does not exist and that global warming has continued over the past few years at the same rate as in earlier years.”

Make a positive change. Subscribe to IA for just $5.