By DeSmog Blog | 27 May 2012, 8:27pm | comments |
Though the Heartland Institute in the U.S.A. promotes climate change denial worldwide, many of their most ardent supporters come from Australia. Graham Readfearn reports. 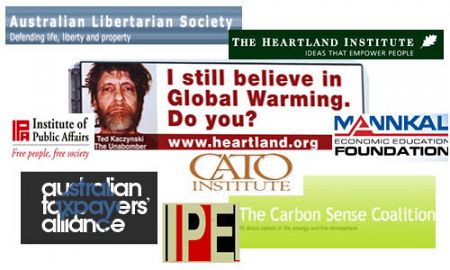 ANY conference worth its salt needs a nice long list of sponsors to give the impression of widespread diverse support for whatever the conference organisers are advocating.

In the case of the Heartland Institute and their advocacy for the denial of the risks of human-caused climate change, their recent conference for climate science misinformers in Chicago can boast official supporters from as far and wide as India, England, Austria and New Zealand.

But one of the most devoted and long-standing group of supporters for their climate change denial conferences over the years has come from Australia. This year there are four Australia-based groups listed as “co-sponsors” and over the history of the seven conferences no less than nine different Australian groups have been happy to have their organisation’s name hitched to Heartland’s colours.

A mistaken impression could be that there’s widespread support for Heartland’s extremist views in Australia. The word “co-sponsor” gives the impression that these organisations are willing to actually give up money to support.

Yet in at least one case, and probably several others, being a co-sponsor is as easy as contacting Heartland and saying that you agree with them. The reality is that those supporting Heartland from Australia come from a small circle of active and loud free-market ideologues.

Take for example a first-time sponsor, the Australian Taxpayers’ Alliance, an organisation launched in May this year by its executive director Tim Andrews. Mr Andrews has spent recent years in Washington being taught how to build a “grassroots” movement of free-market idealism in Australia similar to that of America’s Tea Party movement.

Andrews is a graduate of the Koch Associate Program, a scheme funded by the same oil billionaire Koch brothers who have been pumping millions into America’s climate denial campaign under the umbrella of a “grassroots” Tea Party movement. Andrews also worked for Americans for Tax Reform, which has also sponsored Heartland’s conferences. It’s a “grassroots” movement being created in the narrow interests of the likes of the Koch brothers.

As detailed in the business plan for the Australian Taxpayers’ Alliance (ATA):

'Since 2008, Timothy Andrews has resided in Washington DC learning effective advocacy and grassroots mobilisation techniques from internationally recognised campaigning leaders. He was employed for two years under the tutelage of Grover Norquist at Americans for Tax Reform, universally recognised as the U.S.’s most influential tax-reduction advocacy group. Timothy Andrews was also a participant in the Koch Associate Program, an intense year-long training program by the Charles Koch Institute to train a select group of activists to become more efficient agents for change.'

I asked Andrews about his sponsorship of the Heartland conference — and it turns out it doesn’t take much to get your organisation’s name on the list of conference “co-sponsors”.

Andrews told me the sponsorship was “limited purely to promoting the conference through our networks. It does not involve any financial commitment.” Evidently, Andrews was not put-off associating his new group with Heartland, whose recent billboard campaign used a picture of the Unabomber Ted Kaczynski to claim that “most prominent advocates of global warming aren’t scientists. They are murderers, tyrants, and madmen.”

Andrews said the campaign was “ill-advised” and that it would have no impact on the “high calibre of public policy output” which he claimed he’d witnessed as a previous attendee at Heartland conferences.

Australian climate science deniers, think-tanks and organisations have been enthusiastic supporters of Heartland’s climate conferences since the very first one took place in New York in March 2008.

One of the keynote speakers back then was Professor Bob Carter, an unpaid adjunct research fellow at James Cook University in Queensland and the science advisor to the Melbourne-based free market think-tank the Institute of Public Affairs, which was one of the events’ sponsors.

Professor Carter has spoken at all seven of Heartland’s climate conferences and was listed in a Heartland document as being an intended recipient of $1,667 a month from the think-tank.

The IPA has been promoting climate denialist views for more than two decades and has sponsored four of Heartland’s seven conferences.

The Australian Libertarian Society, where Tim Andrews is also a board member, has sponsored five Heartland conferences, included the current event in Chicago. The founder of the ALS is John Humphreys, who is now also on the advisory board of the ATA alongside the US-based Cato Institute’s Pat “40 per cent of my funding comes from the fossil-fuel industry” Michaels.

As well as accepting cash from the fossil fuel industry, Michaels also accepted the role of science advisor to Tim Andrews’ website stopgillardscarbontax.com which helped to organise a plague of anti-carbon tax, anti-climate science rallies in the run-up to Australia legislating a price on carbon.

Liberal Senator Cory Bernardi, who was a speaker at Heartland’s 2010 conference, helped to establish the stopgillardscarbontax website through his Conservative Leadership Foundation. Former Family First Senator Stephen Fielding is another to have visited Heartland’s conferences before coming back to Australia with climate science denial ringing in his ears.

Five-time sponsor of Heartland’s climate events, including the current conference, is the Brisbane-based Carbon Sense Coalition founded by Viv Forbes, a coal mining veteran and current director of Stanmore Coal.

Not surprising, then, that CSC should have a page on its website explaining how the emissions from coal combustion are “essential nutrients for all life” — as if without them, we’d all perish.

Absent from the list of supporters this year (perhaps they forgot to send the email), is the Mannkal Economic Education Foundation, founded by West Australian mining magnate Ron Manners.

Mannkal, which has sponsored three Heartland conferences, hit the news earlier this year when footage emerged of climate science mangler Lord Christopher Monckton briefing the board room of this pro-mining think-tank.

During the briefing, in July 2011, Lord Monckton pitched the idea of creating an Australian version of Fox News to support climate sceptic and free market ideals. The “super rich”, Monckton said, should be encouraged to start buying into the media. Few doubted that the “super rich” individual everyone was thinking of was the iron ore and coal mining magnate Gina Rinehart, Australia’s richest person, who has twice supported Monckton’s tours of Australia.

Another first-time “sponsor” this year is the Institute for Private Enterprise, founded and run by Des Moore, who spent more than a decade as a research fellow at the IPA and provided a venue for Lord Monckton’s tour of Australia in 2010 and again in 2011. Judging by the IPE website, Moore’s principal activity recently has been writing letters to Australian newspapers.

To complete our list of Aussie backers of Heartland’s climate change confusion events, there’s also the Lavoisier Group, which was established by former Western Mining Corporation boss Hugh Morgan to fight any support for Australia signing the United Nation’s Kyoto deal. Morgan is a former director of the IPA, where his son, William, is now on the board.

So, Tim Andrews and others join the list of Heartland supporters happy to continue their association with a group that claims most climate experts are mass murderers.

Other previous backers have been less charitable since the billboard debacle, with a cavalcade of current and former corporate funders publicly announcing they won’t be supporting Heartland in the future. As outlined in The Guardian, even seven staff members have left in disgust.

In fact, one of the few people on the planet who thought the billboard was a good idea, was Australian devotee Professor Carter who found it impossible to criticise those who pay him.

(This story was originally published on the DesmogBlog and has been republished with permission. You can read more by Graham Readfearn on his blog or follow him on Twitter @readfearn.)
ENVIRONMENT AGW Australian Taxpayers’ Alliance Bob Carter Cato Institute Christopher Monckton climate denial Cory Bernardi Heartland Institute Hugh Morgan IPA
Recent articles by DeSmog Blog