A new scientific study in the U.S. shows that the volume of Antarctic shelf ice is diminishing at an accelerated rate, reports Tim Radford from Climate News Network.

SCIENTISTS IN the U.S. report that the volume of Antarctic shelf ice is diminishing, and that there has been an 18 per cent shrinkage in the mass of some ice floating on coastal waters over the last 18 years.

And because much of the loss has been off West Antarctica, where shelf ice helps to keep the ice sheet stable, it could mean that global sea levels will rise even faster as a result of increased glacial flow into the ocean.

The findings once again raise concern about the link between man-made emissions of greenhouse gases and the dangerous new world of global warming, climate change and sea level rise.

Fernando Paolo, a researcher at the Scripps Institution of Oceanography at the University of California, San Diego, and colleagues report in the journal Science that they used continuous radar altimetry measurements – taken from three European Space Agency satellites between 1994 and 2012 – to compose a high-resolution record of shelf ice thickness. 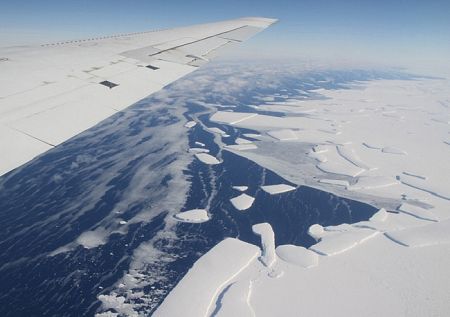 They found that the total volume of shelf ice – the thickness multiplied by the shelf area – around Antarctica stayed more or less the same from 1994 to 2003, but then declined very swiftly.

The ice shelves of West Antarctica lost ice during the entire period, and although East Antarctica had been gaining shelf ice, these gains ceased after 2003. Some shelves had lost 18 per cent of their volume.

“Eighteen per cent over the course of 18 years really is a substantial change. Overall, we show not only that the total ice shelf volume is decreasing, but we see an acceleration in the last decade.”

Shelf ice is frozen sea, so when it melts, it makes no difference to sea levels. But there could be an indirect effect.

Co-author, Helen Fricker, a glaciologist at the Scripps Institution said:

“The ice shelves buttress the flow from grounded ice into the ocean, and that flow impacts sea levels rise, so that’s a key concern from our new study.”

In climate science, one such study is never enough: such conclusions need support from other studies. But the ice volume measurements are likely to add to growing concern about West Antarctica.

One earlier study looked at the potential loss of ice from West Antarctica by examining the “grounding lines” of the terrestrial glaciers, and found evidence of continuous and accelerating retreat. In effect, the West Antarctic ice sheet could be approaching a point of no return, scientists reported.

And a second group used other satellite measurements to calculate that ice was being lost from the southern continent at an increasing rate — around 150 cubic kilometres a year from West Antarctica.

Uploaded by World News Channel on Scripps study 3 days ago.

Were the West Antarctic ice sheet to melt completely – a long, slow process at almost any temperatures – sea levels would rise by more than three metres worldwide.

At current rates, a couple of the ice shelves off the western coast of the continent could disappear completely within 100 years, the Scripps team says.

Although the Arctic is one of the fastest-warming places on the planet, and although this warming has been directly linked to man-made climate change, the pattern of temperature shifts in the southern hemisphere has been more ambiguous.

The Scripps team has now begun to think about possible reasons for the loss of shelf ice in the far south, and one factor might be the cycle of El Niño events — natural and periodic bubbles of Pacific ocean warmth that have waxed and waned at intervals and changed the prevailing weather patterns worldwide through history.

“We’re looking into connections between El Niño events in the tropical Pacific and changes in the Antarctic ice sheet. It’s very far apart, but we know these teleconnections exist. That may ultimately allow us to improve our models for predicting future ice loss.”

And for your listening pleasure, from the Scripps Glaciology Group. http://t.co/bGPSYgThPX