Is the scientific push for geo-engineering likely to fix the world's problems — or make them much, worse? Dr Binoy Kampmark seems less than optimistic. 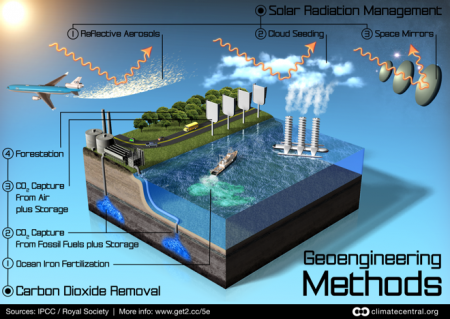 ARE WE DOOMED as a species?

Seems likely, as we look at the new desperate push for a human effort to reverse, alter and adjust the environment in order to halt the previous effects of alteration and adjustment that have been visited upon the globe.

One thing seems bound to happen: a right royal cock-up of stupendous proportions. If something is broken, it’s bound to get even more so when it comes to “environmental” solutions.

Let us, for a moment, assume the optimist’s position on what has come to be called "geo-engineering” — the effort to lessen the impact of climate change by altering the earth’s climate.  This is donning the cap of reflection, an eccentric’s demeanour in attempting to right the crimes committed against the environment. Research as to whether such dramatic measures of environmental reversal are possible has yet to be done on a grand scale, but is being proposed. A genteel David Keith of Harvard University in a recent interview suggested that environmentally engineered adjustments were entirely feasible in a scientific sense — that “taboo” had been broken, at least in “polite company”. The political will, however, would be problematic. Treaties would have to be negotiated, covenants signed.

The big and strong would have to muster their forces for the effort, with smaller nations obediently following the dictated regime. Equipment and materials could be mustered from the G20 to implement whatever grand scheme might be posed.  As Keith argues, if one is talking about adding sulphates “or some other engineered particle” to the stratosphere, only a few could actually pull it off.  In precisely doing that, problems of governance arise.

"The big question right now really is: should we do research in the open atmosphere? Should we go outside of the laboratory and begin to actually tinker with the system and learn more about whether this will work or not?"

When a scientist starts tinkering with the ecosystem, it’s time to get jittery.

What it would require would be a “climate emergency” that would propel nations to act.  Terror inspires action, trauma catalyses. A negative, inverted, logic to progress — but it’s something that is driving the moment.

There is nothing to say that such manipulations are not themselves problematic. In time, such contributions might precipitate other, even graver, crises. The broken can be more comprehensively destroyed. Certainly, the efforts of individuals such as Russ George have become noteworthy — by their unpredictable effects, their pompous assertions, and their self-indulgence. George, recently dubbed by The New Yorker as the world’s first “geo-vigilante”, is a fan of ocean fertilization, a geo-engineering technique he thinks is paved with gold — and iron sulphate. His altruistic credentials tend to come a distant second, which is not in itself a problem, until you discover his somewhat skewed perspectives. Undeterred, he is convinced that there is enough data to suggest that good news abounds.

Last August, high concentrations of chlorophyll were detected in the Pacific Ocean. George’s dumping of 200 thousand pounds of iron sulphate was initiated from a fishing boat 200 nautical miles west of the islands of Haida Gwaii.  George is not a fan of scientific rigour; business comes first. According to Popular Mechanics:

'...didn’t write a scientific paper about the implications of fertilizing the Pacific Ocean with iron.  He just went out and did it, with the backing of the Haida Salmon Restoration Corporation.'


The rationale is, in time, to improve depleted fish stocks, rather than the environment per se.

This, in itself, poses a danger.

The focus here is less on reducing fossil fuel emissions than finding other ways of manipulating the environment to allow us to consume as rapaciously as ever. We are not being told by the likes of George to consume less and in a different, more efficient way — we are being encouraged to simply find a panacea and reverse environmental shocks.

Dumping near the Galapagos and Canary Islands was not something that the Spanish and Ecuadorean governments were that keen on — George’s vessels were subsequently barred from their ports. His efforts have been scrutinised with such effect that international moratoria have been passed targeting the use of ocean fertilization.

If this is an example of geo-engineering in action, we have much reason to be worried. Jason Blackstock of the Institute of Science, Innovation and Society at Oxford bandies about one scenario:

“[In] Michael Crichton’s novel with little robots taking over and eating the world [Prey], they are things that could be pretty damaging if released into the environment, but we just don’t know."

Such reasoning is bound to inspire confidence.