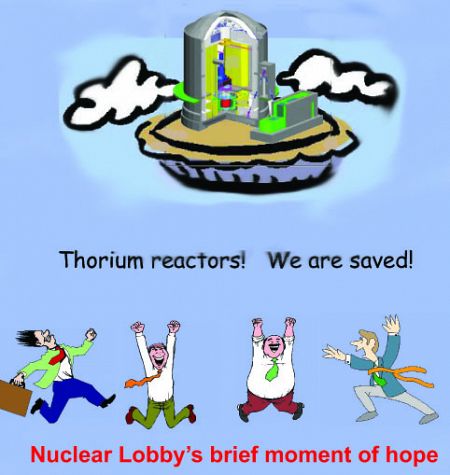 Thorium reactors are the latest flavour in nuclear power hype.

According to their enthusiastic proponents, these reactors will be “smaller, safer, cheaper, cleaner”, will take over the energy market in great numbers, and

...will  reinvent the global energy landscape and sketch an end to our dependence on fossil fuels within three to five years.

Yet the present situation of thorium nuclear reactors is a confusing one. While on the one hand, thorium as a nuclear fuel, and thorium reactors are being hyped with enthusiasm in both mainstream media and the blogosphere, the nuclear lobby is ambivalent about this.

The explanation becomes clearer, when you consider that the nuclear industry has sunk $billions into new (uranium or plutonium fuelled) large nuclear technologies, as well as into lobbying governments and media.  Would big corporations like Hitachi, EDF Westinghouse, Toshiba, Areva, Rosatom be willing, or indeed able, to withdraw from the giant international operations that they already have underway? Would they, could they, tolerate a mass uptake of the new thorium nuclear reactors — which is what would be needed, to make the thorium market economical?

Yet, the nuclear lobby, in Australia and overseas, doesn’t just tolerate the thorium hype, they participate in it — although with not as much enthusiasm as the diehard thorium fans.

Now, why is this?

The answer lies in just one concept — time. It is going to take many decades to  get the thorium fuel cycle happening. The global nuclear industry has the twin goals of prolonging the life of currently operating nuclear reactors, and of building new ones. Their rationale for this is often that, eventually, the energy solution will be nuclear fusion. So in the meantime, the world needs nuclear power — or so they argue.

But nuclear fusion is still little more than  a super-expensive glint in the eye of nuclear boffins. Some other dream is needed — something  that looks a bit more like it might happen. The thorium excitement fits the bill as, once again, the public can be made to believe that, after all the disasters and disappointment, now there really is safe, cheap  nuclear power.

The thorium advocates usually promote thorium reactors as a solution to both climate change and energy needs. But in reality, thorium nuclear energy is irrelevant to both.

Again, the first reason is time. Although there are current designs that could be established in 10 to 15 years, the most favoured design – the  Liquid Fluoride Thorium Reactor (LFTR) – is estimated to have, for a significant deployment, a lead time of 40 to 70 years.

In the meantime, renewable energy – notably wind and solar technologies – are being developed and deployed at a fast rate.

Thorium reactors, like all things nuclear, have challenging regulatory and funding requirements.

Which brings us to the economics of thorium reactors.

They are promoted as small reactors. The makers have to have contracts for thousands before they can afford to start! Significant and expensive testing, analysis and licensing work is required first, requiring extensive business and government support.

The fuel cycle is more costly and the needed protections for workers, plant safety and the public are considerably more than for existing fuels. Compared to uranium, the thorium fuel cycle is likely to be even more costly. In a once-through mode, it will need both uranium enrichment (or plutonium separation) and thorium target rod production. In a breeder configuration, it will need reprocessing, which is costly.

Without exception, [thorium reactors] have never been commercially viable, nor do any of the intended new designs even remotely seem to be viable. Like all nuclear power production they rely on extensive taxpayer subsidies; the only difference is that with thorium and other breeder reactors these are of an order of magnitude greater, which is why no government has ever continued their funding.

So far, I have touched only on these practicalities of the long lead time and the poor economics of thorium nuclear reactor as reasons why they will not be the global energy answer.

Next let's examine the mythology of Thorium-reactorism — the arguments used to tout this new nuclear dream.

Many writers have refuted these myths.

For instance, you may hear advocates of thorium claim: "Thorium reactorscreate no weapons proliferation hazard."

Another claim is: "Thorium reactors avoid the problem of radioactive waste.”

But actually, with LFTRs, yes, there is  a smaller volume of  waste, but it is more intensively radioactive. The reactor itself, at the end of its lifetime, will constitute high level waste:

'With or without reprocessing, these fission products have to be disposed of in a geologic repository.'

Wrong. For one thing:

'Any bomb dropped on a thorium reactor will result in a catastrophic accident.'

'...an LFTR the main danger has been shifted from the reactor to the on-site continuous fuel reprocessing operation – a high temperature process involving highly hazardous, explosive and intensely radioactive materials. A further serious hazard lies in the potential failure of the materials used for reactor and fuel containment in a highly corrosive chemical environment, under intense neutron and other radiation.' 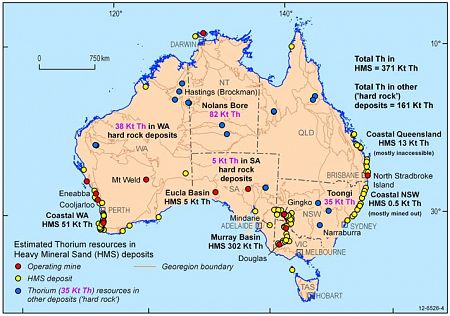 Much more has been said about the disadvantages of thorium reactors in general, but I am more interested in the question of thorium nuclear reactors for Australia. This idea is being touted lately, and we are being told how awful it is that China is beating Australia to the thorium miracle.

To get to the nitty-gritty of this, while there are many types of thorium reactor designs, the most favoured type is the Liquid Fluoride Thorium Reactor (LFTR), in which the fuel is in form of a molten fluoride salt of thorium and other elements. As thorium itself is not fissile, the process requires plutonium and/or enriched uranium to kick-start it. Therefore, it’s necessary to:

Now, even if it is going to take 70 years to get thorium nuclear reactors going in Australia, the nuclear lobby is keen.

Because, well, the mere idea of these lovely little reactors needing plutonium or enriched uranium suggests the wisdom of Australia having uranium enrichment, nuclear power and nuclear reprocessing . And heck, why not a radioactive waste facility – to take in plutonium and other radioactive waste from other countries – as the start of another lucrative industry?  Use it to facilitate the thorium reactors that will be dotted around the country.  To seriously consider thorium nuclear energy in Australia means a foot in the door for the whole nuclear fuel cycle here.

Some of Australia’s nuclear enthusiasts propose a system of many small thorium reactors in regional Australia — to power the mining industry, for instance, and provide electricity for rural towns. Among the drawbacks of this plan is the necessity for security for each little reactor — the guarding of the reactors themselves, the guarding of  an on-site chemical plant to manage core mixture and remove fission products, and the guarding of radioactive materials in transport.

The virtuous argument given for thorium reactors is that thorium power would cut greenhouse gases. This is a favourite Barry Brook argument for nuclear power.  Of course, the time lapse of around 50 years makes this argument absurdly irrelevant.  But I was fascinated to read, on Barry Brook’s website Brave New Climate, the following statement as an advantage of thorium power:

Using Liquid Fluoride Thorium Reactor (LFTR) we can upgrade coal for export (made possible by the LFTR) and eliminate another 55 million tonnes – the coal industry pocketing 5.5 billion dollars of export earnings yearly for its  trouble.

So, thorium can cut Australia’s own greenhouse emissions, while facilitating Australia’s coal export industry. This is despite:

I really don’t know what a thorium energy revolution would do to the uranium industry. It doesn’t seem to me that uranium mining can rapidly switch to thorium mining. It appears to me that the locations of thorium resources are  quite different from the locations of existing uranium mines. So, I wonder if the thorium hype is really rather bad PR for Australia’s already struggling uranium industry.

All in all, the thorium nuclear reactor pitch is just another con job by the nuclear industry. They know it won’t happen, but the idea might help resuscitate that industry. And in Australia, it might even give it a kickstart.