Gold Coast residents and environmental lobby groups are angered over the removal of a popular local habitat for various birds, all in the name of progress, writes Sue Arnold.

THE DELIBERATE DESTRUCTION of Black Swan Lake at Bundall by the local Gold Coast Council is, as some residents are saying, a blowback to the Bjelke-Petersen era, when laws were broken, developers were given open slather and corruption ruled. Police have surrounded the Lake, described by Gold Coast Council Mayor Tom Tate as a “borrow pit”, as trucks began arriving to dump soil near the lake. Local residents have been holding off any dumping of dirt for months and the fast track ordered by the Mayor has community blood boiling.

THE end is nigh for the Gold Coast’s controversial Black Swan Lake as large numbers of police arrive on-scene ahead of trucks which will fill in the ‘borrow pit’. Excavators have arrived on-site.  https://t.co/2USjR3mTaI

Undergrowth on which bird life rely is being slashed and destroyed and much of the greenery has already been poisoned over the past month by council workers. Residents report that trawling for fish had begun on the 2.7 hectare lake.

Tam Hogan, a local resident who has been leading the battle to save the Lake, spoke to IA on the phone as trucks poured into the site, dumping dirt every ten minutes:

"I've never seen work being done at this rate, it’s incredible to see the speed of the destruction."

A volunteer from Wildcare South-East Queensland who is on site waiting to rescue any injured or traumatised birds, turtles or other creatures is not allowed into the area. She’s standing helplessly by with no possibility of access. When asked what is happening to the swans and other birds, Tam responded that the Currumbin Wildlife Sanctuary is unable to take any birds as they are overloaded. There’s no sanctuary, no wildlife hospital or rescue facility where any of the birds can be taken. According to the conditions of approval, injured birds can be killed. Residents and friends of the Black Swan lobby group say the lake is a haven for 32 species of birdlife as it’s quiet and secluded. black swans, herons and grebes are nesting in the Lake.

If history is any indication of the desire of Queensland developers to turn existing lakes into parking areas, the effort by the Port of Brisbane owners is a good example. In 2013, the Queensland Government announced its decision to preserve Brisbane's Swan Lake when the owners of Port of Brisbane were attempting to fill the Lake and replace it with a parking lot for new car arrivals waiting to go to dealers. Over 100 species were present, according to the Wildlife Preservation Society of Queensland, with at least 50 different species seen on a daily basis.

At Black Swan Lake in Bundall, according to Sally Spain, a spokesperson for the resident’s group, a survey by Birds Queensland counted 400 birds in an hour, which she says:

"... is a testament to a healthy, thriving natural asset the lake is and has been for a long time. The lake has been there for 30 years."

The final battle for Black Swan Lake has begun with work starting to fill in the controversial waterway. https://t.co/LNWyXEdUi5 @JessMumme #7News pic.twitter.com/TUVhmIcKJy

When the Gold Coast Turf Club suggested wildlife should be relocated, Currumbin Sanctuary’s Dr Michael Pyne advised that it would be difficult to relocate black swans which are considered highly territorial.

In November last year, Council voted to have the Lake turned into a park, which would be used as an overflow car park during large events at the nearby Turf Club. Owned by the Council, the lake was earmarked as a parking area as part of the $11 million upgrade of the Gold Coast Turf Club site to create the new home of the Gold Coast Show.

Southport Councillor Dawn Crichlow is on record saying the area was classed as an equine precinct and the Lake should be filled:

"We have so many parks through the city, are we going to say we don’t want these events?"

The public was given no opportunity to comment on the proposal before approval was given by the Council.

In January, 2018, Queensland’s corruption watchdog, The Crime and Corruption Commission (CCC), ordered an investigation into the decision by Gold Coast City Councillors to fill in the Lake. Conservation organisations believe the CCC is investigating the process of approval, as barring the public from any comment on proposals which is potentially illegal. However, with seven GCC Councillors on the Board of the Turf Club, conflict of interest allegations are rife.

"Council has also claimed the lake was toxic, but no water sampling was carried out to support the claim."

On TripAdvisor, visitors and residents who enjoy Black Swan Lake made clear that this “toxic waterhole” as described by the Council is:

Full of birdlife and activity, what a treasure this unique place is in the heart of Bundall. Our city needs to save places like this, not destroy them.

Having walked around this lake very early in the morning just about every day for the past ten years, I have developed a great appreciation for what a serene and special place this is. This little patch of green should be preserved amidst the ever expanding footprint of the built environment in our city. It will be a sad day indeed if Black Swan Lake is destroyed, and if it is, the Gold Coast will have lost one of its most special environmental assets. 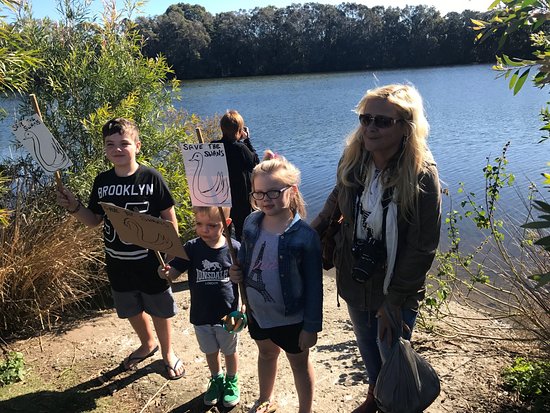 Local resident Bronny Dolphin was at the site yesterday; she watched in horror as a big excavator spread out the dirt:

"All the birds had moved to the back of the lake, I saw a spotter-catcher retrieve a snake and that was about it. One turtle had died. I saved one bird. The Council has basically indicated that nothing is worth protecting, although a migratory species has been identified there."

"Residents who have been watching the site believe run-off and chemicals have been dumped in the water for weeks. We can see some of the underwater plants are dying."

Councillor Peter Young has advised protestors to complain to the Queensland Tourism Minister and the Minister for Commonwealth Games, Kate Jones, alerting her to the widespread negative impact this farce is generating. Legal advice to the residents has indicated that an injunction may stop the destruction, but every lawyer approached has insisted that it would cost at least $20,000. Environmental Defenders Office Queensland has been unable to provide the necessary legal assistance to mount an injunction.

Board the Gold Coast Turf Club: Save Black Swan Lake from being filled for a carpark - Sign the Petit... https://t.co/nNFE4jmheN via @Change

Lois Levy from Gecko, the Gold Coast Hinterland & Environment Council, spoke to the Department of Environment and Heritage Protection Queensland last week seeking their assistance to ensure a Stop Work order was placed on any attempt to fill the Lake.

Lois Levy says she was was told:

Tam Hogan is seeking help from anyone who owns a property where 300 metres of dirt could be temporarily stored — her idea being to remove the dumped soil so the Lake can survive.

"We have been promised help in moving the dirt, we just need somewhere to park it temporarily."

In the meantime, the birds are being hammered and there’s no one allowed on site to catch birds or take injured ones in for care. There's no sanctuary for traumatised, vulnerable, homeless bird life and a very angry community.

The final straw is that residents and ratepayers will not be given immediate access to Black Swan Lake once it is filled in by the Gold Coast Turf Club.

What councillors were told about Black Swan Lake https://t.co/zSXKt4z1wN

19 October 2021, 11:00am To achieve post-pandemic recovery, the NSW Government is advising an immigration ...

Australians must be wary of Trump's 'big lie' infiltrating our politics

6 October 2021, 4:00pm As Gladys Berejiklian flees under an ICAC investigation, it's important to remember ...
Join the conversation
comments powered by Disqus
News updates