By David Donovan | 5 November 2011, 11:32am | comments |
Managing editor David Donovan will be attending a lecture by elaborate conspiracy theorist Ian R Crane. Here he reflects on why these intricate alleged conspiracies are so widely accepted, while the real conspiracies, which are usually obvious and apparent, are often either ignored or denied.


Tomorrow at 10.30am, I am heading along to the Gold Coast Arts Centre for what may prove to be an entertaining lecture from former oilman, and now popular global conspiracy theorist, Ian R Crane.

Crane is described in his press releases as a former oil industry executive, who is now an “author, lecturer and documentary producer” and “one of the leading authorities in deep Geopolitics, where geographical, economic, social, political, and spiritual issues conjoin”.

Before being invited to the event, I hadn’t heard much about Ian R Crane, but then I am not a follower of elaborate conspiracy theories or theorists. Interestingly, when I was interviewing some of the Occupy Gold Coast protestors a fortnight ago, his name came up on a number of occasions. After some research, I have come to see him as part of the Alex Jones ‘Prison Planet’ school of huge, massive, complicated, sophisticated and baroque conspiracy theories, and his argument will eventually come down to something like the top 100 families are part of a massive Matrix-like plot to enslave the world under a fascist one-world Government so they can eventually harvest our organs— or something like that.

This view seems to be borne out by Crane’s press release to promote tomorrow's event:

Mr Crane has gained a great deal of respect, speaking to packed audiences throughout the UK and Europe by questioning the media and governments on their attempts to bankrupt the sovereign nations, to achieve a one world government.

The politicians of Australia also have difficult questions to answer, Mr Crane concluded "If Australian politicians succeed in their apparent quest to bury the country in a mounting sea of debt, while pioneering the introduction of carbon taxes on the behalf of the world trade organisation and all the while reducing public services to minimalist levels, future generations will be condemned to lives of economic slavery." 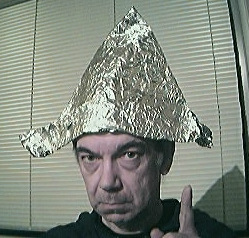 I can just see the tin-foil hat brigade flocking to the Arts Centre building, next to the Council chambers, in Evandale tomorrow.

Of course, I believe there is a conspiracy going on. It is a bit of a banal one, and not that complicated. It is the one being perpetuated by oil industry executives in broad daylight – through neo-liberal think tanks and a small number of corrupt scientists who are on their payroll – to make the general public believe that global warming is nothing more than a scam thought up and perpetuated by climate scientists, who are all collaborating through the IPCC to exaggerate and/or falsify the science — ironically called “junk science” by the oil industry created sceptics. The simple reason big oil and big carbon are doing this is that they want the big profits that flow from oil and coal and other carbon intensive products to keep flowing. It’s not rocket science, I know, but it is more than enough for these companies to spend millions peddling these obvious fabrications.

Conspiracy theories don’t need to be too elaborate to be true — in fact, under the principle of Ockhams Razor, the simplest solution to any problem is usually correct. And this one IS true: we know full well that Exxon Mobil, the Koch Brothers and Western Mining, have, amongst other vested interests, spent billions of dollars creating the deception that global warming is not real. This fact has been studied and reported widely throughout the press. But still, frustratingly, for some reason, people refuse to believe the obvious evil, carried out right in front of their noses, for patently obvious commercial reasons, instead preferring to believe the fanciful lie pedalled by those who are intrinsically complicit in the deception.

“…the world is bad enough without needing to make up elaborate conspiracy theories”.

Furthermore, as outlandish as it sounds, one of the more elaborate conspiracy theories thought up by the oil industry and picked up by the paranoid and gullible is that attempts to mitigate global warming – which, as I’ve mentioned, is alleged to not be happening – is part of an elaborate conspiracy by the WTO in league with scientists and world governments, banks, the UN, and a vast number of other people and organisations to, in effect, bankrupt the world and accrue power to themselves.

Interesting then, isn’t it, that Ian R Crane is a former oil industry executive peddling what appear to be a variation of these self-same conspiracy theories.

It gets worse, Ian R Crane is currently in being sued for illegally recording a publishing defamatory and incorrect material about a concerned citizens group that is attempting to clean up and remediate the calamitous effects of the BP Gulf Oil spill.

On their blog, Gulf Oil Spill Remediation Conference, International Citizens' Initiative, they report the following in an article entitled 'ALL POINTS BULLETIN RE: IAN R. CRANE', they write the following:

The Gulf Oil Spill Remediation Conference, an 11 month-old International Citizens’ Initiative, is filing criminal charges in Tallahassee, FL against Ian Crane, a former Schlumberger oil executive.  The GOSRC has forwarded the original email to authorities in which Crane admitted to taping the former National Coordinator without his knowledge or consent.  Crane’s subsequent suspicious actions and dubious correspondence concerning the Gulf Oil Spill have caused many throughout the GOM citizen’s movement to question his motives and agenda, and therefore compel us to file these charges.

Ian Crane currently poses as an advocate of sorts whereby he often places the full responsibility of the BP Gulf Oil Spill at the feet of BP’s Robert Kaluza. Crane’s former employer, Schlumberger, the world’s largest oilfield services company that worked on the Deepwater Horizon in the Gulf of Mexico, “says its crew left the Horizon on the day of the fire”. As an ex-oilman, Crane has adopted a pattern of behavior in which many sincere Gulf advocates, who do not wholeheartedly join his cause, have become subjected to completely untrue and unwarranted derogatory statements, as well as a continuing barrage of ad hominem attacks.

By several accounts Ian Crane has teamed up with an internet writer, Deborah Dupre, who has likewise used her writing platform to vilify and persecute some of the most courageous heroes of the Gulf Oil Spill.  Dupre writes for Examiner.com which began a partnership with Thomson Reuters in the City of London, England.  Reuters corporate headquarters is located approximately one tenth of a mile from BP corporate headquarters in London. Crane’s media outlet is located in Devon, England.

Dupre and members of her family also reportedly take stipends from oil transport companies which run pipelines over their respective properties in Louisiana.

Almost certainly, what will be presented by Ian R Crane tomorrow will be mostly arrant nonsense, but there will be a few tantalising facts thrown in to allow his audience to plausibly suspend disbelief — an essential for any work of creative fiction. And, sadly, what he says no doubt will be believed by many people — and so the tragic dance continues, as we fiddle while the world burns, and it gets closer to being too late to do anything about it.

I am looking forward to asking Mr Crane some questions. I don’t expect them to be popular ones amongst the crowd there.

Ian Crane’s lecture is called "The Hidden Agenda 2012" and he will also be presenting in Brisbane on November 9 at the Bardon Conference Centre. Tickets can apparently be purchased from his website and Eventbrite.