DAVID ICKE is a weirdo...

That’s not me saying that. Those are the words of Canadian Mark Steyn, who has been crowned “world’s greatest conservative commentator and writer” by the Institute of Public Affairs.

Steyn is currently on a speaking tour around Australia, courtesy of the IPA, where the Canadian author and commentator will bless Perth, Brisbane, Sydney, Canberra, Melbourne and Cloncurry (?) with his greatness. Hes already been on the ABC and Sky News.

Steyn’s characterization of Icke came during his last IPA-sponsored visit to Australia in 2012. David Icke was a professional footballer, then a sports presenter and then, after meeting a psychic, an all-seeing son of the “godhead”.

Icke is a conspiracy theorist of some repute, who says the world is – and I’m summarising here – run by reptilian Illuminati overlords.

Icke also has his eyes on a tour of Australia.

Icke also thinks the moon is a “hollowed-out planetoid” and more likely a spaceship. It used to have buildings on it, says Icke, but NASA got rid of the evidence. (I did interview Icke once, many hollowed-out moons ago.)

Steyn was making fun of Icke, but used the former Coventry City goalkeeper to make a point that however crazy his views were, he should be allowed to express them. Steyn is a “free speech” advocate.

But what Steyn didn’t mention is that Icke also thinks human-caused climate change is a grand hoax, and is actually a

Go and check out Icke’s website if your little reptilian constitution can bear it.

Just like Icke, Steyn attacks the science and suggests climate scientists are frauds. In Steyn’s case, he has a particular dislike for Professor Michael Mann. The Penn State scientist is suing Steyn for defamation.

To help pay for his defence, Steyn has been flogging an IPA book on his own website.

The IPA ran a fundraising campaign to raise $175,000 to help pay for the book, telling donors they could claim a tax credit in return.

So I do hope that while Steyn’s visiting down under, he thanks the Australian Tax Office.

Except, the researchers did know the ice in Antarctica was growing as they had expressly pointed out before they left. In fact, the phenomena was part of their field of study.

In December 2015, Steyn gave “evidence” to a US Senate science subcommittee, chaired by climate science denier Ted Cruz. Cruz opened proceedings recounting the same Antarctic story — also getting it entirely wrong, as I wrote the other day in The Guardian.

Steyn’s personal schtick on the climate issue is that anyone who disagrees with, well, the established facts, is being hounded.

Wrote Steyn in his testimony:

“In shoring up this cartoon climatology, the alarmism industry is now calling on courts and legislatures to torment their opponents.”

Steyn defended Dr Willie Soon, an aeronautical engineer based at the Harvard-Smithsonian Center for Astrophysics.

Soon’s career over the last decade has been almost entirely funded by fossil fuel interests.

Soon also claims CO2 from burning fossil fuels is good for the planet.

I’ve argued that Soon’s work is easier understood if you see it as PR fodder for the fossil fuel industry, rather than serious academic work.

Soon managed to get a paper published in a journal, authored with Lord Christopher Monckton, that attacked climate models.

Steyn wrote that the reaction of the 'climate mullahs' to the publication was swift.

'The Big Climate heavies did not attempt to refute the paper, but instead embarked on a campaign to get him fired from the Harvard-Smithsonian Center for Astrophysics.'

Except the 'Big Climate heavies' did refute Soon’s work with a paper published in the same journal, some four months before Steyn’s testimony.

Steyn has also been complaining about his Canadian compatriot David Suzuki, who had said former Canadian Prime Minister Stephen Harper should be

“... thrown in gaol for wilful blindness."

'Only a very weak idea requires that kind of underpinning totalitarianism. You should be very careful about using phrases like "thrown in jail” in a free society.'

Does this mean that fellow climate science denier Lord Christopher Monckton, who has been repeatedly advocating that climate scientists be gaoled, is also a totalitarian with weak ideas?

Then to close his written testimony, Steyn referenced a paper written by scientists at the federally funded National Oceanic and Atmospheric Administration (NOAA).

The paper, published in Science, concluded that a reported slowdown in warming at the Earth’s surface had more than likely been due to inconsistencies in the data.

But after spending so much time attacking “climate mullahs” for their treatment of climate science deniers, he then forgot to mention how the NOAA scientists had been hounded by Republican politicians with requests for correspondence and data (the data was already out there).

Not only did Republican politicians target the scientists, but a conservative group known as “Judicial Watch” also weighed in with legal action to try and force the release of internal NOAA documents.

Now what was it Steyn was saying about the use of “courts and legislatures” to target opponents?

I do agree with Steyn about one thing though.

David Icke is a weirdo. 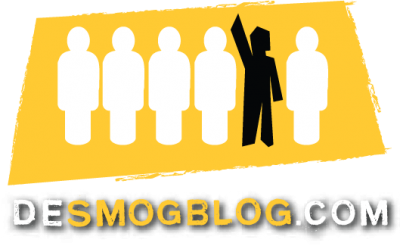 If positions are weak or ignorant they'll be defeated in the marketplace of ideas | @MarkSteynOnline #QandA https://t.co/2LrcQW2G0G