Climate of procrastination: The curse of the short attention span

Unless we keep the pressure on our leaders, claims of progress at the Paris Climate Summit will prove hollow, says Mike Dowson.

It’s interesting to look at the trends in popular opinion about climate change, as measured by surveys.

The ups and downs seem to coincide in part with dramatic events. A natural disaster like a fire or flood may bring the issue to the fore. Other events, such as an act of terrorism, may have the opposite effect.

After 9/11, Americans, when surveyed, rated terrorism as the biggest threat, with climate change hardly worth a mention. The published data on actual causes of death was much like it is now. The top spots were occupied by illnesses, many of them preventable, as well as accidents and suicide.

Despite the relatively small blip caused by 9/11, you had to drill down a long way into the long term data to find terrorism at all. Some wag at the time pointed out you were slightly more likely to die in the U.S. falling off a bar stool. 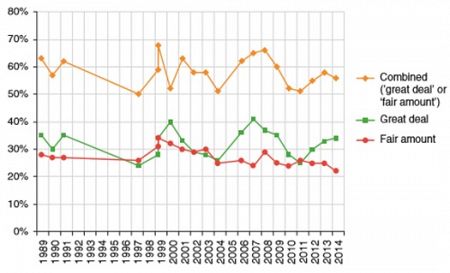 What strikes me about this is how we seem to be predisposed to respond to threats that are sudden and violent, regardless of probability. Threats that are remote or gradual – but nevertheless highly likely – don’t seem to be as important.

It’s not hard to see a possible explanation. We evolved in small groups inhabiting fairly small territories. Even as early human populations spread across the world, the experience of individuals would have been mostly local and personal. Mortal danger existed in the form of predators, illnesses and injuries. Environmental change, on the other hand, was relatively gradual and, as it turns out, may have actually helped to facilitate hominin expansion.

Although we recently began to live in large urban agglomerations, detached from the natural world, our brains evolve slowly. We are wired as if the ancient world is still the one we live in. Even the gargantuan forces that disrupt the modern world – wars, economic shifts, technological changes – don’t seem to concern us very much until we perceive an immediate threat.

If we could switch our perception from human time to geological time, we might see things differently. From earth’s perspective, this is a period of cataclysmic change.

Massive stores of carbon are being wrenched from the ground and pumped into the atmosphere. The forests are disappearing in the blink of an eye. The ice caps are melting. The oceans are turning to acid. Innumerable species are being snuffed out like candles in a storm. A few others – including us, our livestock, parasites, pests and pets – are swarming over the earth like a plague, consuming everything in their path, and spreading toxic waste products everywhere.

It’s not the first time the earth has been rocked by violent upheaval. To an individual trilobite or dinosaur, past apocalypses would have been strangely imperceptible too. Nevertheless, in both cases, the world that had supported their dominance for millions of years was rapidly replaced by one that no longer had room for them.

What is new is that the present mass extinction is directly caused by one species. No one species has ever before held in its hands the fate of so many, including its own.

Although dangerous changes in the biosphere are hard to detect in human time, there are some humans who are constantly confronted by them. In place of our ordinary senses, the scientists who study climate gather vast amounts of data and process it with mathematical models. This enables them to see what is happening from earth’s perspective. Numbers that, to the untrained eye, look harmless, may be alarming to someone who understands their implications.

If a lobbyist, politician, fossil fuel magnate or champion of global capitalism says we have nothing to worry about, it may be tempting to believe. Unless you live on an island with water lapping at your door, or on farmland devastated by persistent drought, you may not notice anything that reinforces what climate scientists have been telling us.

This is not simply a case of competing opinions. The motives behind these messages are entirely different. The carbon kings are protecting their assets and the ideology of extractivism, to quote Naomi Klein.

The measure of their success is personal wealth and power.

The scientists are building models, testing them and refining them. The measure of their success is the accuracy of their predictions.

The rest of us do well to differentiate clearly between these two motives when we choose what to believe about climate change.

The imminent danger for us all, in the fading glare of the Paris Climate Summit, is that we assume the job is done and get back to business as usual. Unless we keep paying attention, that is precisely what will happen. The earth will lose the voice that genuine science has given it and that other voice – the one that never ceases to prattle, the voice of narrow self-interest – will once again dominate. This is the curse of a short attention span.

Unless we can agree and, in fact, collectively demand of those who make big decisions on our behalf, that they do so on the basis of genuine scientific consensus, we are doomed to follow the trilobites and dinosaurs. Climate change is only the beginning.

A Universal Basic Income will work

17 February 2019, 7:00am Remembering how the Government assisted those in need decades ago, it's apparent ...
Join the conversation
comments powered by Disqus
News updates