By taking action now against climate change the world would save $1.8 trillion by the year 2040, however if no action is taken, it will lose $44 trillion during the same time time. Farron Cousins from DeSmog Blog reports.

AS PRESIDENT OBAMA heads to the Arctic to discuss climate change, just mere weeks after approving Shell Oil’s bid to drill for oil in the treacherous Chukchi Sea, a very different group is sounding the alarm over the dangers of a warming climate. That group is, surprisingly, Wall Street bankers.

Citibank has released a new report showing that taking action now against the growing threat of climate change would save an astonishing $1.8 trillion by the year 2040. Conversely, the report says that if no action is taken, the global economy will lose as much as $44 trillion during that same time period.

As Think Progress points out, the Citibank report takes into account the potential lost revenue from leaving resources in the ground — including 80% of coal reserves, half of the world’s gas reserves and a third of global oil reserves — and still concludes that the global economy would see a net gain. 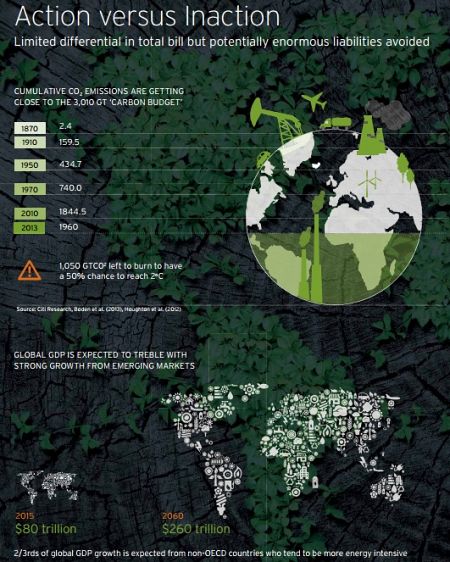 This report offers a very stark contrast to the typical talking point that we hear as to why we can’t take action on climate change — that action would simply cost too much.

But this is not the first time that financial leaders have warned about the financial dangers of climate change.

Earlier this summer, a group of current and former Wall Street executives and former U.S. Treasury secretaries warned that a 2 degrees Celsius increase in global temperatures could result in property losses in the state of Florida totaling $23 billion by the middle of this century. On top of the economic losses from property being underwater, the Southeast would also begin to see an alarming rise in yearly deaths due to extreme heat, with some estimates putting the yearly death toll as high as 35,000 people a year. Agricultural losses could be as high as 20% of current yield. 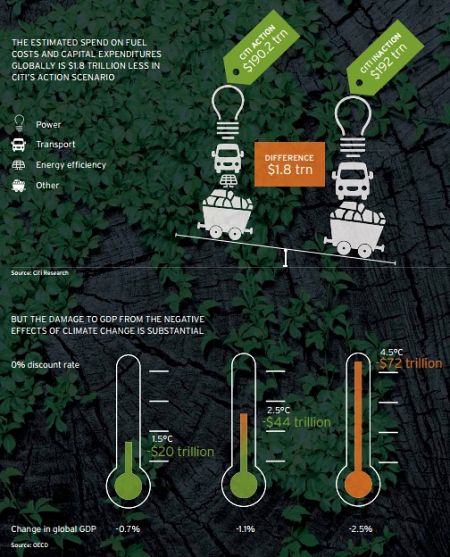 If Wall Street understands the threat of climate change, even if only in terms of dollars, then this begs the question as to why they continue to fund climate change denying politicians.

Since 2014, Wall Street banks, real estate firms, and insurance companies – all industries that have expressed enormous concern over the financial threat of climate change – have poured an astonishing $507 million into political campaigns and lobbying activities. 62% of this money went to Republicans.

Politicians in office who deny #climatechange in #America . http://t.co/oHBMrLZB8w pic.twitter.com/laVeujk296

If they want to be taken seriously, and if they want their financial concerns addressed by politicians, then Wall Street bankers need to immediately stop the flow of corporate campaign cash that is going to climate change deniers. As long as those people hold seats of power in WashingtonD.C., then we will continue to see action stalled year after year.

This story was originally published by DeSmogBlog on 1 September 2015 under the title 'Wall Street Warns About Cost Of Doing Nothing On Climate Change' and has been republished with permission.

Big bank says it’s going to cost a lot to do nothing on global warming http://t.co/UbevkPm0D2 pic.twitter.com/JdeK4FzhRY