SUBSCRIBE   DONATE LOGIN SHOP
SUBSCRIBE   DONATE
Why a Murdoch media royal commission shouldn't happen ─ at least not yet
Where's Albo? Not on holiday with Dutto and ScoMo
Get a Mark David T-shirt!
KERRYN PHELPS: COVID is not over!
Help IA speak truth to power! Subscribe NOW
Environment

The nuclear industry remains remarkably optimistic about its future, despite evidence that it is a shrinking source of power as renewables increasingly compete to fill the energy gap. Paul Brown from Climate News Network reports.

THE HEADLINE figures for 2014 from the nuclear industry describe a worldwide boom in progress, with 73 reactors presently being built and another 481 new ones either planned or approved.

The World Nuclear Association (WNA) official website paints a rosy picture of an industry expected to expand dramatically by 2030. It says that over the period 1996 to 2013, the world retired 66 reactors and 71 started operation. Between now and 2030, the industry expects another 74 reactors to close but 272 new ones to come on line.

This represents a much larger net increase in nuclear electricity production than the basic figures suggest because most of the newer power stations have a bigger capacity than those closing down.

Detractors of the industry say that these projections are a pipe dream and that nuclear power will not expand at that pace, if at all, and that solar and wind power will grow much faster to fill the energy gap.

Which projection is correct matters enormously because the world is both short of electric energy and needs to replace fossil fuels with low carbon sources of power to save the planet from dangerous climate change. Nuclear energy and renewables such as wind and solar are in competition to fill the gap.

The figures show that nuclear production is currently in decline from a peak in 2006, and is now producing less than 10 per cent of the world’s electricity needs.

World solar capacity, on the other hand, increased by 35 per cent in 2013, and wind power by 12.5 per cent — although, added together, they still do not produce as much power as nuclear.

All the evidence is that wind and solar will continue to grow strongly and particularly solar, where technological advances and quantity of production means that prices have dropped dramatically. 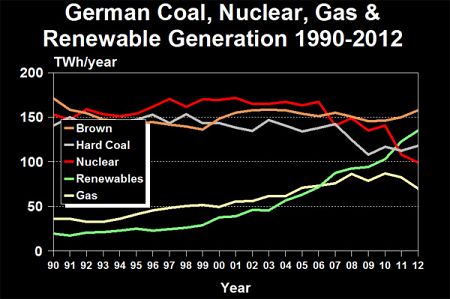 Costs of producing energy are hard to compare because solar is small and local and dependent on sunshine, while nuclear is large and distant and must be kept on all the time. However, research suggests that solar is already producing cheaper power per kilowatt hour than nuclear, the costs of which have not come down.

Both costs and time seem to be major factors in deciding which technology will gain market share. Nuclear stations are expensive and a long time passes before electricity is produced, making them almost impossible to finance in a normal commercial market. Solar panels, in contrast, can be up and running in days, and wind turbines within weeks.

Historically, nuclear power plants have always been built with government subsidy — a pattern that is continuing across the world. For example, the two countries with the largest number of reactors under construction – China, with 29, and Russia, with 10 –have populations with no democratic say in the matter.

Critics of the WNA figures say that while the claims for reactors planned and proposed might be real, the chances of most of them actually being built are remote. The U.S. is said to have five reactors under construction, five more planned and 17 proposed — but with existing nuclear stations closing because they cannot compete with gas on price, it is unlikely that all of these will be completed by 2030.

The U.K., which has a government keen to build nuclear stations, is said to have four stations planned and seven more proposed. The first of these stations was due to be opened by 2017, but work has not yet been started. The earliest completion date is now expected to be 2024, and the rest will follow that. 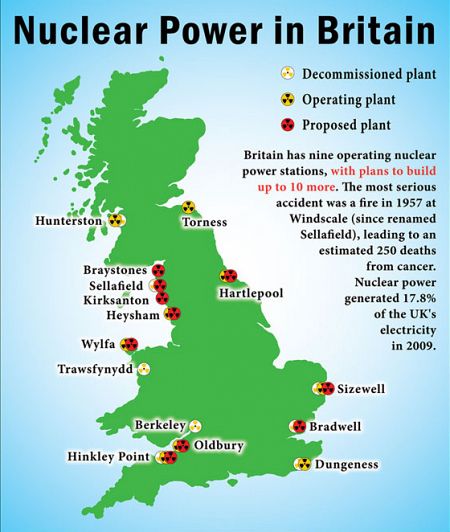 The delay in Britain is partly because the subsidies offered to French, Chinese and Japanese companies to build the U.K.

reactors are under investigation by the European Commission to see if they breach competition rules.

Martin Forward is from the English Lake District, where one of the four nuclear stations is planned, and runs Cumbrians Opposed to a Radioactive Environment. He said:

“I cannot see how nuclear has any future in Europe because of cost. Nuclear needs massive subsidies to be financially viable, but these are currently illegal under European law, so it is unlikely that the British ones will be built.

“Even if the government can get over that hurdle, there are many problems to overcome — for example, the designs of the stations have to be finalised. The process could take years, by which time wind, solar and other renewables will have expanded so much it will make nuclear redundant.” 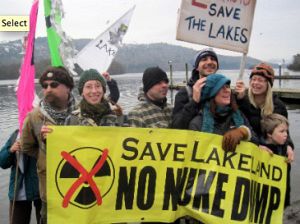 Cumbrians Opposed to a Radioactive Environment

The industry does not accept this, pointing to the U.S., where utilities hope that all five plants currently under construction will be producing power by 2019.

Siobhan O’Meara, a senior analyst at Nuclear Energy Insider, is one of the organisers of an annual “nuclear construction summit”, the sixth of which is taking place in Charlotte, North Carolina, in October.

“With nuclear new build taking off once again across the globe, it’s never been more critical to finance, plan and deliver your construction programmes on time and budget.”

Time will tell who is right.