Thanks to the Abbott government's controversial decision to swim against the world tide on carbon pricing, Australia has now "fallen off" the map. Dr. Anthony M Horton reports from the 2nd Australian Emissions Reduction Summit in Melbourne this week.

WORLD BANK lead economist, Gayatri Acharya, has highlighted Australia’s “glorious distinction” of being the first country to remove a carbon price in a presentation in Melbourne on 5 May 2015.

She noted that on the world map of carbon pricing which includes 60 countries, Australia was no longer coloured in.

Bloomberg New Energy Finance head, Kobad Bhavnagri, who was also present, gave a very pointed assessment of Australia’s policy settings, stating that it was failing in the majority of global trends towards decarbonisation and that Australia’s policy approach was incoherent. 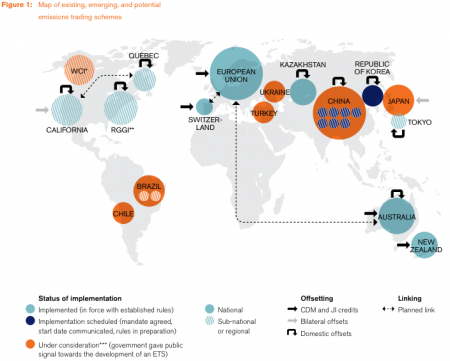 The World Bank's 2013 map of carbon pricing schemes, existing, emerging and potential which then showed Australia.

In addition, in Bhavnagri’s opinion, the Direct Action policy wasn’t providing any incentive to invest and didn’t send a positive signal to the business community with regards to rational future economic planning.

This was in contrast to a number of other nations where such incentives were provided. He did concede that Australia led the way in distributed technologies (e.g. rooftop photovoltaic systems), although that was likely a result of high electricity prices and the significant investment from individual householders.

With these assessments adding to the existing queries regarding the Australian Government’s climate change policy and social media almost constantly updating and educating people about the risks of climate change and the related actions/policies of other Governments, I think most Australians would be perplexed as to what else it would take for the current Abbott Government to revise theirs.

In an earlier blog, I discussed some of the queries raised by China and the United States — queries which the Government must respond to prior to attending the United Nations Climate Change Conference in Paris in December this year.

One wonders whether other nations will take actions against Australia that are more significant and lasting than simply “removing the colour” from Australia on the world map if they deem the Abbott Government’s commitment to be insufficient and incompatible with the leadership Australia is being called to demonstrate.

More of Bruce Keogh's cartoons can be found at Keogh Cartoons.

Gayatri Acharya lead economist World Bank speaking at @CarbonMarketIns CS every country to have a price on carbon now pic.twitter.com/k1rsyBBLbh

Support the need to report and act on global warming. Subscribe to IA for just $5.