Who is the Reserve Bank really looking after?

In Australia today, there is very little concern about how much influence the RBA has over the structure and direction of the Australian economy, writes Murray Hunter. 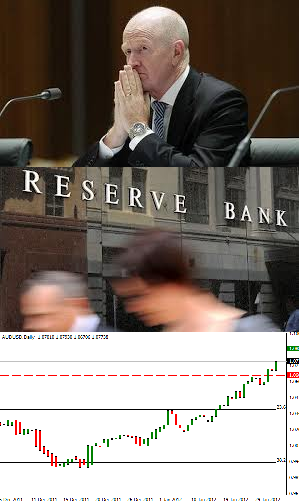 WITH AN Australian dollar 10 per cent overvalued according to an IMF official, and interest rates being among the highest in the world, maybe it's time to ask the question: Whose interests are the Reserve Bank of Australia (RBA) looking after?

The RBA has much influence over the Australian economy and is solely responsible for Australia's monetary policy and supervising the banking system. But what may surprise many is that the RBA is an autonomous body. Furthermore, the RBA is not directly accountable to the Australian people.

The Reserve Bank of Australia was formed in 1960 to take over the role of banknote issuing authority from the Commonwealth Bank. The Reserve Bank initially supervised the banks. However, from 1 July 1998, the banking supervision function was transferred from the RBA to the newly created Australian Prudential Regulation Authority. The Reserve Bank Act was amended also to create a new Payments System Board, with a mandate to promote the safety and efficiency of the Australian payments system. New legislation, the Payment Systems (Regulation) Act 1998 and the Payment Systems and Netting Act 1998 were introduced, giving the Bank relevant powers in this area.

(a) the stability of the currency of Australia;

(b) the maintenance of full employment in Australia; and

(c) the economic prosperity and welfare of the people of Australia’.

From 1993, the Reserve Bank formally focused on the objective of price stability, where inflation was to be held to an average of 2-3 per cent over a period of years.

The power of the RBA over Australia's economy is immense. Public pronouncements by the bank governor can stir stock and currency markets. Those decisions are made by an independent board who get their advice from both formal and undisclosed informal sources. This lack of any transparency in decision making can cause potential conflict. Former Prime Minister John Howard blamed the Reserve Bank for his election loss in 2007, accusing the bank of meddling in domestic politics by announcing a rate rise (Ref: Howard, J., (2010), Lazarus Rising, Sydney, Harper).

If one undertakes a very quick internet search on the current RBA board members, it will be found that the directors have links to multinationals, media, right wing think tanks, and other foreign interests. The Reserve Bank Governor Glenn Stevens, portrayed by the Australian Financial Review as the most powerful man in Australia, is an avid New American Standard Bible reader.

But who is appointed to the board in order to ensure that the monetary and banking policy of the Bank is directed to the greatest advantage of the people of Australia? There is no provision that the RBA board have any representative to specifically look after the public interest. Nor are there any representatives to represent small business or Australian wage earners.

So what is the state of the economic and financial environment the RBA has been stewarding on behalf of the Australian people?

The RBA has allowed the Australian Dollar to rise to record highs against the U.S. Dollar and other currencies. Although this reflects some weakness in the U.S. Dollar, the Australian Dollar is high in its own right and is attracting inflows from investors wishing to benefit from relatively high interest rates in Australia. The high Australian Dollar, although making imports cheaper, is keeping a check on domestic inflation. However, this is putting Australian exports in a precarious position, where industries are being devastated. This is costing many thousands of jobs. Rural industries in Australia are also finding it very tough competing against cheap primary produce imports. This could cause the shut down many rural industries altogether in the not too distant future. Local manufacturers have been crippled in many industries, while import orientated businesses have flourished. Australian business models today are more focused on developing overseas supply chains rather than innovating new technologies.

There are no doubts that the high valued Australian Dollar is forcing a restructuring of the Australian economy, if not Australian society as a whole. The resources boom saved Australia from a recession in 2008, and is keeping the economy buoyant today. However, by allowing the Australian economy to become too narrowly focused on resource exploitation, the manufacturing and farm sectors have become almost squeezed out of existence. This, to some degree, has been replaced by a large service sector to absorb employment.

The high dollar has created wealth for Australia, as the pundits claim, however wealth is also been redistributed away from middle Australia, which is reflected in the slowly rising unemployment rate. Although a high dollar keeps down inflation, the high costs of this are starting to show.

The combined effects of financial deregulation, the high Australian dollar, and the relatively high interest rates the RBA sets comparatively to the rest of the world, is attracting money from all around the world into Australian bonds. The big four banks are having a bonanza as their bonds are guaranteed by the RBA. With AAA credit ratings, the big four are able to borrow from the RBA at the best rates. The big banks are able to issue bonds that are secured with assets where the smaller banks cannot, thus greatly disadvantaging the smaller banks.

Over the last few months, the major banks have been able to raise more than $20 billion of new funding through their AAA-rated covered bonds to government and other investors all around the world.

The Government action of guaranteeing private banks has created a "moral hazard", where the banks are insured on the assumption of being too big to fail. History has shown this as a recipe for irresponsible behavior. Today, the scenario exists where the tradeoff between risk and return has been eliminated. In Australia, the lower risk banks with the highest credit ratings are able to provide higher returns than the smaller banks with the lowest credit ratings, a complete reversal of the inverse relationship between risk and return — that the Australian taxpayer has guaranteed.

Today in Australia, responsibility for economic policy is divided between an elected government, which exercises fiscal measures, and the RBA which exercises monetary measures. The rationale for this is to take away the temptation for elected governments to manipulate monetary policy for electoral advantage. However, in the light of the recent EU financial crises, this division should be reviewed to prevent any potential financial crisis occurring in Australia, no matter how remote this possibility may appear today.

We are likely to witness and example of policy conflict between the Government and RBA in the coming months. Due to the election this year, the Australian Government is under great pressure to deliver a surplus budget. The RBA policy on maintaining a comparatively high interest rate, at a time the government is cutting spending, may lead to an economic slowdown if the RBA board doesn't take action to lower rates further to compensate for the government's fiscal actions. How the RBA handles this will be interesting.

This leaves Australia in a medium to long term predicament, in need of national debate. Today, the Australian economy is being driven by the longest commodity boom the country has seen. This is being driven by urbanization in China, but this will not last forever — just like the gold rushes of the 1800s, and wool boom in the 1950s.

Australian society has changed into a service society, without much of an innovation base. The nature of the Australian economy has become dangerously narrow. The increasing relative wealth of Australians is covering up the need for Australian policy makers to discuss the future direction of Australia's economy. New industries that maintain high levels of employment need to be created.

Today, it is apparent that structural change within the Australian economy has been left entirely up to the board of the RBA to decide. There is not much time to prepare for the end of the mining boom. This national discussion must be held sooner rather than later. If Australia faces an economic downturn from a resource bust, then the economy would most likely lunge into a deep recession. The existing service economy would also collapse, where there will be no sector capable of driving the economy out of recession.

Although interest rates are heading down, closing the parity gap between Australia and the rest of the world, this will probably have little effect on the Australian dollar. This means that manufacturing and construction will continue to decline, putting more pressure on unemployment over the next twelve months. This may assist in making housing relatively more affordable for Australians, but only marginally so — much less than the RBA would be hoping for to compensate for the slowdown within the mining sector. This could result in lower economic growth than expected, as lowering interest rates will have little effect on consumers already high in debt. This may force the RBA to intervene directly over the value of the Australian dollar, something the RBA Governor Glenn Stevens said he would be very hesitant to do.

Perhaps the RBA's profits and surpluses could be ploughed into a sovereign wealth fund on behalf of Australia, in a similar manner to the Government of Singapore Investment Corporation (SIC). These funds could be invested into strategic overseas assets that will put downward pressure on the Australian dollar and also assist in generating national wealth when the mineral boom starts to decline.

The benefits of a high Australian dollar are negated by the high costs of living that now exist within Australia. This negates any comparative advantage for small to medium manufacturers. The destruction of Australia's manufacturing industry requires urgent attention, as new employment opportunities must be found. Traditional employers like Holden laid off another 500 employees within the last week. There seems to be very little national debate about the underlying reasons behind the current unemployment rate of 5.6 per cent. History shows that this is an election loser for governments.

The RBA's policies have given the big four banks a special advantage, where bumper profits are being made.

We have also seen how little transparency the RBA exhibited during the Note printing bribery scandal, which is a worry when the Australian public are trusting this institution to run the country's monetary policy. We need to take a lesson from the banking crisis in Cyprus, as Australia is exposed to the world through a highly traded currency and vigorous bond market. Who is looking after the public interest at the RBA?

In Australia today, there is very little concern about how much influence the RBA has over the structure and future directions of the Australian economy. The future shape of what the Australian should be like in the future is a matter for national discussion. These issues are outside the brief of the RBA, but are of concern to every Australian.

Again the question can be asked, In whose interests is the RBA Board acting for?