'A government can no more regulate the news that it can regulate the weather. Hitler and Mussolini tried and look what happened to them?'

[Note: Adolf Hitler and Benito Mussolini were European dictators who exerted iron control over their media. In the end, Hitler shot himself in the head and Mussolini was last seen hanging from his feet outside a butcher shop in Italy.]

I wrote the above Tweet when I woke to Fran Kelly on the ABC passing on the news that Rupert Murdoch had entered the fray over a submission presented to Prime Minister Tony Abbott by his wily rival, Malcolm Turnbull.

The previous day, the whole story had appeared in the Fairfax-owned Australian Financial Review, also engaged heavily now in a battle with the Murdoch papers.

Of course, we all know that Rupert Murdoch himself has been personally regulating his own media from the moment his father died in 1952.

The 84 year old Rupert has employed the same strategies in Australia, Britain and the USA for the past 63 years, and any ambitions Turnbull might have to change anything is centred on Turnbull's own desire to crush Abbott.

Regulating the media is as old a part of world politics as the media itself — from when in 1440 Johannes Gensfleisch zur Laden zum Gutenberg, a blacksmith, launched his home made printing press in Germany and human beings soon began to read for the first time from printed paper.

Now, in 2015, on March 16 Murdoch tweeted to his half million followers the following:

Aust! Turnbull's plans to scrap certain rules suit buddies at Nine. Can't oppose dumping all regs but not this. Nice to see how MT plays.

What Turnbull wants to do is to give the existing Australian media (including TV Channel 9) an opportunity for greater sharing of stories and for easier merging with other TV stations. The overall plan would enable media companies to compete with unregulated digital enterprises, like Independent Australia and its various competitors.

What is not clear yet is whether the unregulated new sources would remain unregulated.

The Turnbull plan also covers matters like free to air sports coverage and the imminent entry of the U.S. Netflix service to Australia. It will offer a paid fee opportunity to watch current movies on the home TV.

The plan leaked from Abbott's office so fast that the ink was barely dry and Murdoch in New York was informed of Turnbull's plan only minutes later.

News has always been a problem for those who want to manipulate it to their own advantage and Rupert Murdoch is the master of that skill. His newspapers are losing money nearly as fast as his multiple other ventures in other parts of the world are bringing in profits.

His personal use of newspapers has always been the source of his power over governments, politicians and other and his business rivals — but has been rarely displayed in such force until today.

Governments can no more regulate the news than they can regulate the weather. Hitler and Mussolini tried it and look what happened to them!

Subscribe to IA for just $5 and get this mousepad... 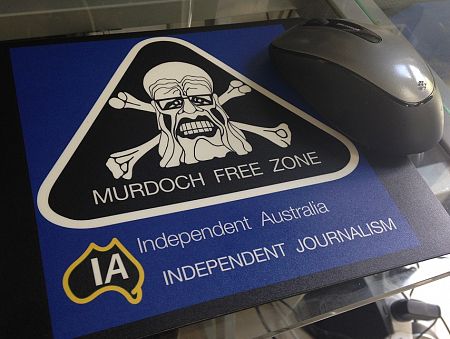