Sometimes it is difficult to tell who is leading and how is following — News Ltd or the Opposition. The cacophony of class war about the Wayne Swan Budget for example is pure  fiction but both Abbott and News Ltd repeated it ad nauseum.

Julia Gillard and Wayne Swan as Lenin and Trotsky? Give me a break.

Is Clive Palmer and the tin foil hat brigade devising the strategy for Murdoch’s newspapers and the Opposition?

Working class war? The facts are rather different. As Des Moore from the Institute for Private Enterprise points out in Wednesday’s Australian Financial Review, Swan’s budget is the most contractionary in Australia’s history and the reduction in real expenditure the largest ever.

Are Clive Palmer and the rest of the tin foil hat brigade devising the strategy for Murdoch’s newspapers and the Opposition?

We are entering, or more precisely are in, the age of irrationality as the last defence for rampant capitalism and vested interests and the rotten consequences of the way the system is organised. Billions are starving or malnourished; living standards are under fundamental and sustained attack across much of the developed world; wars are waged for lies, killing millions.

The media and politicians have an antagonist and cooperative relationship. They are parasites feeding on each other.

That close relationship is highlighted by David Cameron employing Andy Coulson, former editor of British Murdoch paper News of the World in 2007. Coulson resigned in January this year from Cameron’s staff.

At the Leveson Inquiry, he admitted he had £40,000 of News Ltd shares while working for Cameron but denied there was a conflict of interest. Cynics might say that is true, since the interests of Government and News did not conflict. Coulson also denied he had been appointed by Cameron to influence Murdoch in his coverage and denied that part of that influence buying involved smoothing over a deal for Murdoch to buy BSkyB.

That is a question now swirling around Cameron himself.

Cameron is not the only Conservative politician to appoint a former Murdoch employee to their staff. Here in Australia, Opposition leader Tony Abbott has also just appointed a former News Ltd operative.

Let me quote a report from last week:


‘Creina Chapman, the long term regulatory affairs brains of the company [News Ltd - JP] has been poached by Tony Abbott and will join his staff as a senior adviser.’  [Joe Aston, Rear Window, Australian Financial Review, Friday, 10 May, page 56.]

Others have described her as a News Ltd corporate affairs manager.

So, her trajectory seems to have been the Liberals, PBL, News Ltd and now the top Liberal and, apparently, the next Prime Minister — Tony Abbott.

According to a 2010 Mayne Report in Crikey Creina Chapman was a former Philip Ruddock staffer, who was advising Richard Alston on IT when she landed the gig of manager, regulatory & corporate affairs at Kerry Packer’s PBL.

That appears  a little out of date, because IBT reports she joined News Ltd in 2007 from PBL.  She was the contact person for the Right to Know Coalition — a group that according to David Salter in Crikey was a News Ltd stunt (involving other media owners and outlets too). Creina was, and is, listed as its contact.

No doubt, former News Ltd employee Creina Chapman is the best person to be appointed a senior adviser to Tony Abbott. But shouldn’t the Opposition leader be subjected to some serious questioning about this? Who could do that? Oh I dunno, maybe Greg Sheridan from The Australian when he is next out for dinner with Abbott?

(This story was originally published in En Passant and has been republished with permission.) 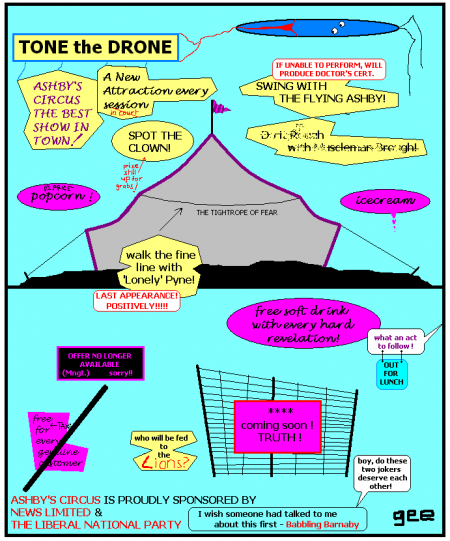