Australia is currently negotiating a top-secret trans-Pacific trade pact that looks set to cede wealth, sovereignty and human rights to the U.S. and multinationals, reports Matt Mitchell and Bill Davis. 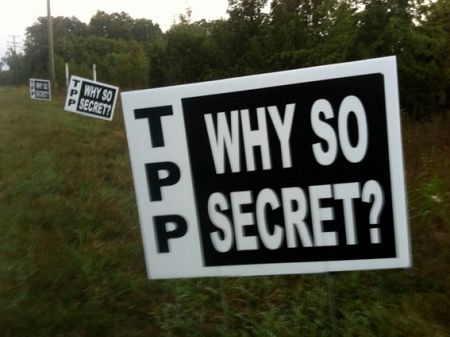 ON NOVEMBER 14, DFAT held a stakeholder update briefing for the TPP (Trans-Pacific Partnership).

It became clear in the briefing that the TPP process is a regional replacement for the WTO (World Trade Organisation) agreements that failed after the last successful round of WTO negotiations (the Uruguay Round). It also became clear that, at the end of this secret process, a take-it-or-leave-it document would be produced. At that point, when negotiations have effectively concluded, the final decision to accept or reject the agreement would be made by cabinet, after which parliamentary approval would almost certainly be a “rubber-stamp” to the agreement.

[Read Mitchell and Davis’ June 2012 introduction to the TPP.]

So what is cabinet likely to approve?

Our own opinion is that the final agreement as taken to cabinet (in secret) will require a significant change to our current Pharmaceutical Benefits Scheme (PBS).  It will also, most likely, place substantial new responsibilities on ISPs in relation to policing and reporting on the activities of ISP users and customers.

The negotiation team did made it clear that Australia was opposed to any changes that would affect the PBS, however due to the secret process and the hidden text, the terms of the agreement will not be seen by the public until it is too late to make any difference. The secret process prevents the negotiation team from publicising any concessions that must be made to the US and thus prevents the community from voicing any opposition to the terms until they have been accepted by cabinet.

At this point it is too late for any further changes.

It is likely that cabinet will accept the terms set by the U.S., for two reasons.

Firstly, to not accept it would mean no agreement with the U.S.. This would marginalise Australia and potentially cut off significant trade opportunities in the region.

Secondly, recent Australian Prime Ministers have revealed that they covet U.S. approval and the reflected glory that comes from Australia's close relationship with the U.S.

In the very worst case Australia would be forced to accept what is called an Investor State Dispute System (ISDS).  This system would allow multi-national companies to seek damages from TPP nations if national laws affect their investments in those nations. This would include new environmental or health laws that might lead to increased costs or reduced profits for the multi-nationals. One could expect our tobacco labelling laws to be immediately disputed. These disputes would not be decided by Australian courts — but rather by a supra-national tribunal system of unclear design and membership.

It does not have to be like this. We do not need a secret process for trade agreements. Australia should never have legitimised this anti-democratic secret process by entering into it. There are alternative processes that are appropriate and acceptable to a nation that purports to have the values that Australia does.

One such process would be for staged releases of the agreed text. This would allow genuine and informed stakeholder feedback and responses. Currently stakeholders have no real idea of what is in the agreement. The process is deliberately designed to prevent this — why else have a secret process?

The information provided to stakeholders at the feedback meeting was virtually useless. It was either very general information – such as that provided in this article – or it concerned the relative progress of the various sections. Stakeholders were assured that their views would be reflected in the negotiations, however questions that – for instance – pressed on the issues of ISP accountability for customer downloads were met with stony silence. Certainly, no reassurance was provided. Other challenging questions the responses were also met with silence.

The meeting started with a summary of the expected benefits of the agreement. These were expressed in the most general terms which include:

Explanations of what these terms actually meant in practice were missing. But from the language used, it might mean that this is an absolute giveaway to Transnational Corporations, (TNC), who seem to have complete rights to the supposed secret text of the agreements.  Also it looks as if TNCs have more rights than the citizens of Australia to a "fair go", which is a very American position at the moment ― the exact opposite of what most Australians think are our country’s underlying values.

When pressed as to what were the trade-offs involved, the TPP negotiators initially replied that there were only benefits to Australia, more open supply chains, for example.  The question arose:


Surely favouring easier sourcing of goods from outside Australia would negatively impact any efforts to favour local production?  Had this been considered?

The ensuing queries as to what values and principles were driving the Australian negotiations showed the negotiators’ inability to even address the question. This revealed that these negotiations would follow Australia's agenda from the WTO negotiations. Economic growth was explicitly mentioned (so where DFAT is concerned a steady-state economy is apparently out of the question). Although not stated explicitly, it appears that the values and principles behind the negotiations are most likely drawn substantially from neo-classical free-trade economics. This raises a concern as to how the negotiators will balance the DFAT free-trade agenda against their promise to faithfully reflect the stakeholders' views when one of the stakeholders represented the Textiles, Clothing and Footwear industry (TCF) who are apparently very concerned about the potential effects of the TPP agreement on local production and the local industry.

Just for those that do not know, in 1948, the General Agreement on Tariffs and Trade, (GATT) was put into place. This was replaced by the World Trade Organisation, (WTO), on the 1st of January, 1995. The WTO intends to supervise and liberalise international trade. Most of the issues the WTO addresses are from previous trade negotiations, especially from the Uruguay Round (1986-1994).

The WTO is still trying to complete the DOHA Development Round, launched in 2001, but there are too many disputes, and it is uncertain they will ever be resolved. Therefore, it looks as if the only way forward for neoliberal and neoconservative free trade interests are through bilateral and multilateral free trade agreements. Secret processes may assist these interests in obtaining agreement on issues that have previously been opposed by participants.

But what is free about free trade?

What these types of agreements seem to be doing is deindustrialising Western countries to allow the lowest wage workers in the world to be exploited, while shipping good jobs for our children out of each reasonable wage country.  The TPP is known in the US as "NAFTA on Steroids", which years ago US Presidential candidate Ross Perot said if implemented would lead to a "giant sucking sound" as millions of jobs left the country.  He was of course right, millions of jobs did leave the US, 61 per cent of them being assembly of parts shipped from the US, assembled in Mexico, then shipped back to the US for consumption.

It seems the same interests that caused the Global Financial Crisis are trying to dominate the TPP, with a decided "democracy deficit". This effort may lead to the disenfranchisement of citizens’ rights to be able to decide what kind of country they live in by allowing governments to weaken sovereign powers significantly in favour of corporate interests.

The risk of the TPP process is that the US will use its power to dictate trade agreements with the ultimatum that other countries either sign, or lose out completely. The US and TNCs did not like the Super Profits Mining Tax, and these same forces not only unseated a sitting Labour Prime Minister, but forced a change to the Mining tax during a boom. The tax that replaced (the MRRT) has not, so far, generated one dollar for the Australian people. The TPP process, as it currently stands, allows our trade negotiations to be dominated by these same interests. 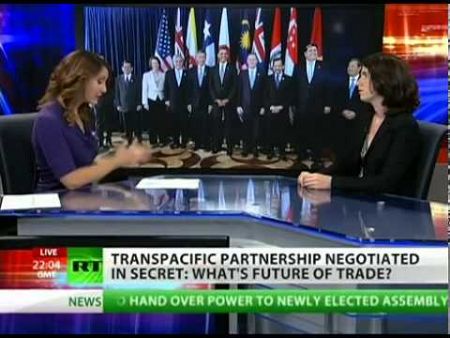 If citizens are concerned about this and wish to seek more information following are the key members for the Australian Foreign Affairs, Defence and Trade Sub-Committee: