The rise of chartered accounting

Benjamin N. Counter takes a calculating look at the rise of the chartered accountant and doesn't like what he sees.

THE WORLD IS neatly divided into two groups: people with lives, and people who do other people’s tax returns. 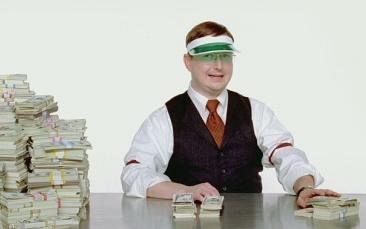 Accounting is the art of counting things and putting them into little boxes. It may be the second oldest profession. The earliest known writing comes from tedious piles of ancient Sumerian scrolls recording ancient bookkeepers endlessly tallying bushels of wheat and urns of olive oil. It is believed that this civilization became suddenly extinct after a particularly vicious wedgie from the ancient Babylonians.

Accountants are commonly regarded as being dullards and dorks. There are accountants who rail at this archetypal view. Sadly for them, pitifully boring nerds that they are, nobody ever listens.

It is inevitable that accountants have developed a reputation for staidness, since accountancy is boring — obscenely, maliciously and grotesquely boring. And yet surprisingly easy.

Accountancy is hilariously based upon separating everything into debits or credits. And that’s more or less it.

Studies on higher apes and dolphins have shown that they would quite easily be able to master the double entry accounting system, except they really just couldn’t be bothered — which is exactly like almost all intelligent humans.

Indeed, further studies have shown that over 98 per cent of accountants take up the profession because they are too dull and thick-headed to become lawyers.

Accountancy is the blue collared profession. Doctors, engineers, architects, lawyers and scientists chuckle quietly to themselves when they hear accountants calling themselves professionals, usually at the same time each year they hand the accountant garbage bags full of dry-cleaning receipts and largely irrelevant paperwork.

There are three different varieties of accountant: the bookkeeper, the degree qualified accountant and the increasingly ubiquitous chartered accountant.


Once, bookkeepers prevailed. Every business had a bookkeeper. As a general rule, it was your alcoholic Uncle Neville in between rum binges. This suited everyone, most especially Neville.

During the 1970’s, Gough Whitlam decided, with all good intentions, that Australians should be allowed free university education. Unscrupulous universities – that is, almost all of them – quickly realised that the easy way to get more of that delicious government money was to provide more courses. Needing something cheap and simple that almost anyone could teach, they quickly hit upon Accountancy degrees. Pretty soon, everyone wanting to work as a humble bookkeeper needed a degree.

Soon, family businesses suffered from this change because they were obliged to engage high charging accounting firms to do their bookkeeping. Unfortunately for them, Uncle Neville had left the family business. He was now earning $100k p.a. lecturing at the local TAFE.

It must be remembered, above all, that accountants are intrinsically greedy and obsessed with money. This stands to reason, because their profession is totally centred around counting money, something only very selfish, greedy and unimaginative people would wish to occupy themselves with all day every day as a career.

It is because of this shared characteristic that chartered accountants have come to dominate the profession. Since increasing numbers of avaricious nerds have, of course, sought to lift themselves above the calculator-crunching ruck by increasing their accountingness and up-skilling themselves, the once highly sought after chartered accountant is now as common as ink stains on an accountant's blouse pocket.

To become a chartered (or uber) accountant, you must first complete an Accounting degree and then find a job as a degree-qualified accountant somewhere. While working in this accounting job, you apply to do your chartered professional accreditation. Once you are accepted and have paid the chartered accounting body, it senselessly and maliciously compels you to study an exactly identical accounting programme to the degree you've just recently completed, except that they make the exams three times harder. Once you pass this gruesomely demanding trial, you are not able to call yourself a chartered accountant until first you have endured years of torment, or rather mentoring, under a sweaty veteran accountant with chronic halitosis and a flaking scalp. Once he has signed off then, and only then, will an aspiring nerd be able to call himself a fully-fledged professional accountant.

In summary, to become a chartered accountant, you must willingly drench yourself in accountancy day and night for at least seven years. Disturbingly, this is still quite legal under the UN Humans Rights Conventions.

Sadly for those sorry individuals who have subjected themselves to this, these days almost every accountant is chartered. This means that no extra rewards accrue for these sorry dweebs. And when you think about it carefully, it serves them absolutely right.

Because of this, the new thing is to complete a Masters degree in Accountancy. What more there is to learn about debits and credits is difficult to speculate upon. In fact, it is quite important not to think about this at all. If you are still thinking about this, please stop doing so immediately.

With that thought gone, you may be asking yourself, how does Ben know know all this information about these sorry social outcasts and their miserable profession? I know this because, to my shame, I am an accountant. But at least, in my defence, I’m not chartered.

(B.N. Counter is receiving professional treatment for a chronic addiction to adding things up. With God's help we pray for him to have the strength to overcome this terrible affliction.)
BUSINESS Gough Whitlam greed Humour Satire TAFE beancounters chartered accountancy bookkeeping accounting degrees studying accounting
Recent articles by David Donovan