The Madness of King Murdoch

When ageing media mogul Rupert Murdoch sat down for an interview with Paul Kelly in May, he demonstrated not only his own weakness, but also the flaws in Australian democracy. Managing editor David Donovan reports.

IT IS ALWAYS A SIGNIFICANT MOMENT when the publisher of 70 per cent of Australia's newspapers sits down for an interview with one of his loyal liege men.

And so it was when Rupert Murdoch sat down with Paul Kelly – the grave, grey editor-at-large of Murdoch's national broadsheet, The Australian – to discuss the anniversary of the newspaper's first edition, which was published on 14 July 1964 — 50 years ago today (14/7/2014).

The interview was aired over the weekend on Murdoch's Australian cable TV channel, Sky News — although it was actually recorded in New York in May, according to bright-eyed, boyish Sky host Peter van Onselen. It was shown in two 15 minute segments, with Kelly given the opportunity to preview and provide commentary half-way through.

Murdoch and Kelly faced each other across a typical boardroom table — Kelly at the head, with his own bowed slightly as he looked to his boss, while Murdoch slouched near the middle, smiling the predatory smile of an ancient alligator.

Kelly, in his preview, had announced in a portentous baritone that Murdoch had made a "significant" announcement in the interview, which he then rather spoiled by announcing exactly what it was — that starting The Australian had in fact been the idea of Murdoch's father, Sir Keith Murdoch.

They then played the interview, whereupon Murdoch launched into this "revelation" immediately.

"I have to tell ya," said Murdoch, banging the table with a crocodilian claw and leering at Kelly, "it was actually my father's dream. He told me about it as a teenager and in my 30s I got impatient..."

Impatient, unfortunately, was something Kelly was not, as he allowed Murdoch to ramble on disjointedly, something the ageing tycoon did throughout the interview — smiling, stumbling, stopping, umming, ahhing, banging the table disconcertingly and following lines of memory down unexpected rabbit-holes, before finally stopping confusedly, as if lost and unsure about exactly how he had arrived there.

Luckily, each time, the dutiful Kelly rescued him with another terse, worshipful question.

"We were young and we were progressive," croaked Murdoch about starting The Australian in 1964.

"And we like to think we still are," he added, cackling.

davrosz ... I like to think my buck teeth and bald head make me look like George Clooney

Murdoch, for his part, maintained the theme throughout — of an elderly, impish, slightly demented dictator, eagerly embracing a second childhood.

"Starting The Australian was one of my main lifetime achievements," declared Murdoch. "I hope I have many more yet."

Murdoch was asked about the hounding of Gough Whitlam out of office — when journalists at The Australian went on strike over his blatant and heavy-handed editorial interference.

Murdoch was unrepentent. "I think we were right," he grunted.

@unravelau He had no regrets about propagandising her out either. He said it was "the right thing to do"... for the country, of course.

He was similarly unrepentant over hounding Rudd and Gillard out of their jobs, something Kelly acknowledged News Corp had "received some criticism" over.

"I think it was pretty right," said Murdoch.

In fact, listening to Murdoch, they had never got it wrong.

"We had a vision for Australia," he crowed, "and we still do".

Kelly embraced this theme with his version of enthusiasm. "It is a paper with a definite view of the world, isn't it?" he intoned, to which Murdoch readily concurred.

"Its success is shown through its circulation figures," squawked Murdoch, ironically, banging the table, yet again, before then launching into a long and puzzling dissertation about the time people apparently spent on The Australian's "app".

@davrosz no, he's right. Circulation figures give clear indication of the success of that paper.

Where The Australian found its "view of the world" was evident from Murdoch's rambling, and increasingly random, pronouncements:

“The NBN was a ridiculous idea, still is.”

According to Murdoch, jaw-droppingly:

"Australia already has terrific broadband. You can get 45MBs pretty much wherever you are."

@davrosz @piecekat68 in your Learjet, Limo and skyscraper I agree ;-))

"We can be the low-cost energy country in the world. We shouldn’t be building windmills and all that rubbish.”

"Climate change has been going on as long as the planet is here and there will always be a bit of it. At the moment the north pole is melting but the south pole is getting bigger. Things are happening. How much of it are we doing, with emissions and so on?

"As far as Australia goes? Nothing in the overall picture. There will be a 3C rise in temperature over 100 years and when that happens only one of those [degrees] would be manmade. That's the worst case scenario.

“What it means is if the sea level rises six inches it’s a big deal, the Maldives might disappear, but we can’t mitigate that, we can’t stop it, we just have to stop building glass* houses on seashores."

@davrosz ...it's not like there's inhabited islands in the way of the rising sea level #Murdoch #facepalm #Newscorpse

Yes, not only is the above the editorial line of all of Murdoch's media operations in Australia, but it is also that of the Liberal Party. In fact, close analysis shows there is not a skerrick of difference between Abbott Government policy and the naturalized American media tycoon's views, as expressed during Kelly's toadying interview.

Listening to Murdoch today, it's very clear that there is not cigarette paper between his views and Coalition policy.

And what was Mad King Rupert's opinion of Tony Abbott — one of the most brazenly dishonest politicians in Australia's political history:

“My impression is that he is the most admirable, honest, principled man, something we really need in a prime minister, someone we can look up to.”

Then he fired a shot across the bows, presumably in case Abbott might consider diverging from Rupert's approved radical brand of devil take the hindmost free market conservatism:

“How much does he [Abbott] understand free markets and what should be happening? I don’t know. Only time will tell.”

Still amused about Uncle Rupert speaking utter tosh on Sky today and his puppet Paul Kelly accepting it like it was the Sermon on the Mount.

As Paul Kelly can tell you, the only way you can earn his rewards is by absolute acquiescence and grovelling supplication. And as your King's behaviour becomes even more arrogant and demented, it may become increasingly testing to foster his favour.

@davrosz Well in his defence we are one of the most childish.

* Author's note: Other publications have suggested Murdoch said "vast houses" not "glass houses". The author is not so sure. 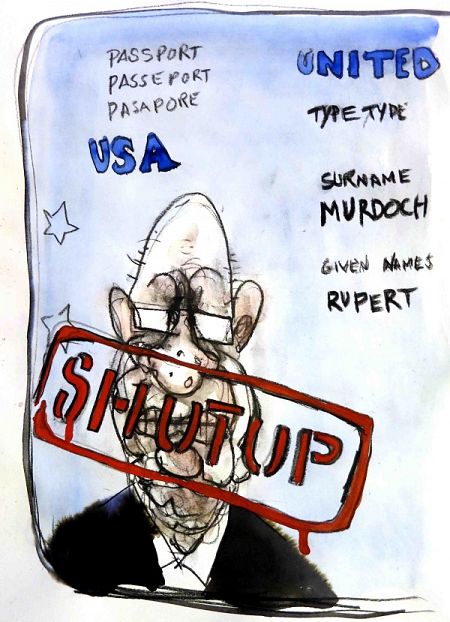