The Code is clear: Outing a corrupt source is a journalist’s duty

The outing of Cash's leaking staffer by Buzzfeed's Alice Workman has divided journalists, but IA Press Gallery representative Dr Martin Hirst is in no doubt she did the right thing.

I CAN'T SAY I’m surprised that the action of outing a source in the #CashOut leak scandal has divided the Press Gallery. Gallery journos are a mixed bunch with varying standards of ethics and political ideologies, so it’s understandable that some would back Buzzfeed’s Alice Workman for breaking the De Garis story and others would be muttering about the sanctity of source protection.

I’m firmly in the Alice did the right thing camp. I would not have hesitated to break the story if members of the Gallery were willing to give the staffer’s name. In my view, De Garis did not deserve protection as the source of the tip-off because he was doing it for the most base of motives. De Garis was not a leaker, he was giving a news tip. He is most definitely not a whistleblower in any meaningful sense of that term either.

In fact, what David De Garis allegedly did – alerting some media outlets and select journalists that the AWU offices were about to be raided by the AFP – was actually a corrupt act and very likely illegal under Section 149 of the Criminal Code relating to the obstruction, or hindrance of Commonwealth officials. 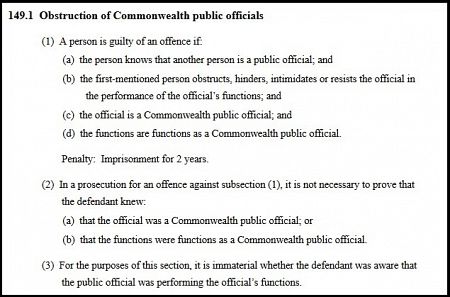 However, a number of prominent journalists have denounced Alice Workman and claim that under no circumstances should a journalist give up a source.

I am a little surprised that Laura Tingle of the Australian Financial Review is one of them.

Her argument (taken from The Guardian) goes to the core of the matter:

'Quite a lot of journalists have apparently rewritten the ethics code to say it is OK to shop your source once matters enter the realm of the ‘public interest’,” Tingle wrote on Friday. “Political journalism can be as compromising a job as politics itself. But like a political party which misuses state power against its political opponents, its practitioners only look worse for suggesting the unethical is being pursued for higher purposes.'

The key phrase here is “public interest” but, as I argue below, Tingle’s take on this is actually the wrong interpretation of how the public interest test should be applied in this case.

A similar position was taken by Channel Seven’s Robert Ovadia who wrote in an opinion piece:

'The issue has polarised the media: those saying the journalists who revealed their source were right to do so because of the suggestion a minister had misled parliament - and those, including me, who believe there is no circumstance ever that justifies a journalist revealing their source, beyond preventing imminent criminality or protecting people’s safety.'

Ovadia is inconsistent though. First, he argues there is 'no circumstance' that justifies a source being outed, but then goes on to list his own exceptions, 'imminent criminality or protecting people’s safety’.

Well, as I’ve suggested, we may well have a case of actual, rather than imminent criminality in this matter. Let’s see what the AFP has to say about that. A Gallery journalist should probably also be familiar with this potential breach of the law by De Garis.

The point is that there are always exceptions to ethical rules and the public interest test is the arbiter of a journalist’s actions in matters such as this.

Ovadia’s second substantive argument – and one that’s been used by others, including NewsCorpse chief Coalition publicist Sharri Markson – is that if journalists give up sources then trust will be broken.

But look how Ovadia phrases this:

The point of protecting sources at all costs is to preserve trust in the entire profession.

Whistleblowers and “leakers” for the common good can only feel safe if journalists have enough character to also preserve the confidentiality of leakers who only do so in their own political self-interest. Whistleblowers deserve to know journalists will not make a judgement call on whether they deserve confidentiality or not. It must be sacrosanct. What has happened in the past couple of days has undermined that process terribly.

The job is to report on the game – not become a player.

This is disingenuous. There is a big difference between a genuine whistleblower and a politically-motivated staffer who sees mileage for his minister and the government in throwing a bone to the Press Gallery.

But let’s just talk about "trust" for a minute, since Ovadia brought it up.

The bond of trust for a journalist must be first and foremost with the public, not with Canberra insiders who will drop tasty tidbits of newsworthy bait into the waiting open mouths of gullible reporters.

Ovadia’s line about not becoming a player is the most obscene one. Just about every journalist in the Press Gallery sees themselves as a player; they love having insider knowledge and rubbing shoulders with power.

He also doesn’t think there’s much of an issue with Cash misleading Parliament, giving away his own penchant for insider status. Well, judging from the reactions, I’d say the public actually does care; and rightly so.

It’s time that these upholders of values and ethics actually revisit the MEAA Code of Ethics on the issue of source protection and the public interest. As you will see, a reasonable interpretation of the relevant clauses does not seem to support their position.

I am pleased to see that Guardian Australia editor Katharine Murphy has come to the right conclusions. 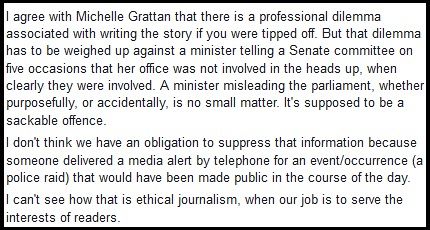 There are three parts to the Australian journalists’ Code of Ethics: the Preamble, the 12 Standards of the Code and the Guidance Clause, which sits at the end like an over-arching rider on the preceding clauses.

Let’s start with the Preamble.

'Respect for truth and the public’s right to information are fundamental principles of journalism. Journalists search, disclose, record, question, entertain, comment and remember. They inform citizens and animate democracy. They scrutinise power, but also exercise it, and should be responsible and accountable.'

If you then delve into the relevant clauses about source protection, here is what you find in Clause 1:

'Report and interpret honestly, striving for accuracy, fairness and disclosure of all essential facts. Do not suppress relevant available facts, or give distorting emphasis.'

In this case, the source of the tip-off is a relevant fact that should be disclosed, not suppressed. Why is the source relevant?

It’s relevant, because the Registered Organisations Commission, which had initiated the raid, is a highly controversial agency with a clear political agenda and deep ties back to the responsible minister, Michaela Cash. Further, the raid itself was politicised by the act of tipping off the news media. This was clearly De Garis’ intention and his motive is highly suspect. Not reporting this essential fact is to actually give 'distorting emphasis' to the story, making it seem like the raid had a legitimate purpose when, at the very least, its legitimacy is contested.

My take on the outing of David De Garis by journos:
They should actually read their own Code of Ethics
It is clear on the issue
A thread... https://t.co/ipURZBzztw

Clause 3 is the one that Alice Workman’s detractors are relying on — but they do not rely on the whole clause, only the last sentence:

'Aim to attribute information to its source. Where a source seeks anonymity, do not agree without first considering the source’s motives and any alternative attributable source. Where confidences are accepted, respect them in all circumstances.'

The first part of this clause demands attribution as the minimum standard. The second stanza would put the responsibility on a reporter to first consider the motive of the source and not to blindly give an anonymous source blanket protection. It is only at this point that the third sentence kicks in.

"The bond of trust for a journalist must be first and foremost with the public, not with Canberra insiders who will drop tasty tidbits of newsworthy bait into the waiting open mouths of gullible reporters."

So, let’s consider the motive of the source, Mr David De Garis. First of all, he was not leaking in the accepted sense of that term, he was providing a news tip using information he was privy to, but should probably not have disclosed.

By all accounts De Garis is a seasoned operator who has been a loyal Liberal staffer for some time and has served in several capacities. He is not some naïf who didn’t know what he was doing. His motive is clear: he thought that the raid on the union offices would be good for his boss, provide ammunition for the Government in attacking Bill Shorten and a welcome distraction in a disastrous week for the COALition.

The motive was corrupt. The tip off was clearly designed to capture the evening news bulletins with a story favourable to his boss. The tip was about a political attack on the union movement and the ALP, and also to promote the work of the ROC. Remember, the ROC reports to Cash and would not normally move without keeping her office informed (she denies prior knowledge).

Now consider the consequences if Mr De Garis had been able to pull off this deception and keep his involvement secret.

The week would look totally different for Turnbull, Cash and the Government. They would have looked like winners. And winners are grinners.

This would have been bad for the public interest, because it would have deceived voters about the whole truth of the story as it subsequently unfolded.

Is it fair and responsible to keep a tip-off secret?

We now need to also insert Clause 8 into considerations:

'Use fair, responsible and honest means to obtain material.'

Is taking a drop from a ministerial adviser with corrupt motives ‘fair, responsible and honest’?

Finally, we need to consider the over-arching Guidance Clause, which, once again, brings us back to the public interest test:

'Basic values often need interpretation and sometimes come into conflict. Ethical journalism requires conscientious decision-making in context. Only substantial advancement of the public interest or risk of substantial harm to people allows any standard to be overridden.'

Ethical journalism requires conscientious decision-making in context. This is pretty powerful and it is hard to see how conscientious reporters could fail to see the whole context of this tip-off.

The kicker, though, is that the standards set out in Clauses 1-12 must be interpreted and, indeed, enforced, only with regard to the ‘substantial advancement of the public interest’. It is wrong to argue – as Tingle, Ovadia, Markson and others have done – that exposing the person who tipped off the media does not constitute a ‘substantial’ public interest reason to revoke anonymity.

It only makes sense to argue for anonymity for De Garis if your first loyalty is not to your public, but to your fellow insiders.

That flies in the face of the ethical requirement on journalists to ‘animate democracy’.

It’s a no-brainer, unless you’ve got no brains to begin with.

Any Gallery journo who would NOT have outed this leaker should hand in their union card and go work for the coalition https://t.co/UtuegsbhAC