The Coalition and Rupert Murdoch

WHEN JULIE BISHOP went on ABC Lateline last night and told Australia that Kevin Rudd had “lost the plot,” she was simply showing total ignorance.

Because Murdoch owns more than half of Australia’s newspapers,  we Australians are deprived of knowing the extent of the real mess now facing Rupert Murdoch across three continents.

Except for the regular readers of Independent Australia, this nation is not being told the whole truth of what is happening to the Murdoch empire. Apart, that is, from what is now being predicted to become a messy divorce from his third wife, the former Wendi Deng, who was married to Murdoch for fourteen years.

The divorce case was intended to be smooth and without complications due to a pre-nuptial agreement signed by both parties.

Now, however, Wendi has hired one of New York’s trickiest divorce lawyers, William Zabel, who has made a career of syphoning money out of pockets of the rich and famous and who has been known to shred pre-nuptials into confetti in the courtroom.

Among other points of law, Wendi’s lawyer will attempt to show that the female lawyer who drew up the agreement was a close personal friend of Rupert Murdoch.

But this is a minor irritation for Rupert compared with a rising tide of other issues that could very well see the 82-year-old Murdoch losing control of his entire international empire.

Should this happen, Murdoch – even if he was able to avoid jail as a result of some more serious investigations in both the USA and the UK – would certainly be forced to recede back to the country of his birth once again to run what is left of his business capability.

Let’s look as some of his current concerns.

In the US, the English lawyer Mark Lewis, who led the attack on phone hacking, has partnered an American lawyer named Normal Siegal in an investigation into hacking allegations by Murdoch’s Fox News television. At least ten people have come forward with complaints.

Lewis has been quoted as saying he has been contacted by at least 10 other people, not about hacking but about

“...other untoward dark arts to obtain information that should be private."

More complaints have been raised by the New York Civil Liberties Union.

U.S. Federal law provides for jail sentences of up to 10 years for violations.

Hillary Clinton, who plans to run for the US presidency, and her husband, the former president Bill Clinton, were friends of Murdoch but have had a falling out with him over stories that ran in his New York Post and on Fox News.

Mrs Clinton has spoken of privacy intrusions and recently commented:

“Whether it’s law, finance, medicine, academia or running a small business, people rely on confidential communications to do their job. If somebody breaches our trust we are all the worse for it.”

Complaints against News Corp have already been filed in California under laws protecting communications, wiretaps and personal privacy.

The U.S. national Foreign Corrupt Practices Act is far stricter than state laws. Hundreds of companies have been convicted, with tens of millions of dollars paid out in fines. U.S. courts seem far more comfortable than their UK counterparts when it comes to sending executives to jail.

But more immediate for Murdoch is the rising demand from his U.S. shareholders for his removal. His senior executives are aware of shareholders concerns and their continued loyalty must be strained.

In Britain, Murdoch has to await a second inquiry ordered by the government covering Murdoch’s suitability to hold one third ownership of BSkyB TV.  Ofcom, which governs Britain’s communications industry, may soon rule that he must divest himself of those shares.

This investigation is based on secret recordings in the UK in which Murdoch viciously and stupidly attacked the British government, the British police and the British judiciary.

He would have little alternative then to return to Australia and, under Tony Abbott, might be allowed to continue to own all his newspapers and his pay TV and, perhaps, even own the NBN, or a major share in it.

Is this what Australians really want? 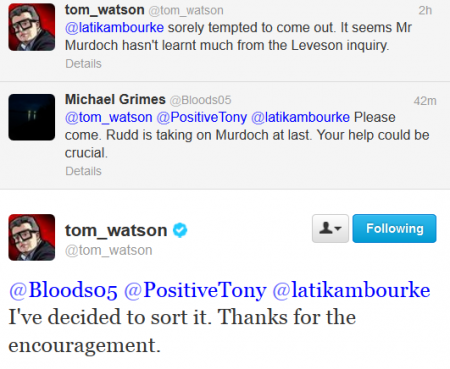