Ignore the big banks bluster about a bank levy — they are an uncompetitive rent-seeking cartel that do not pay their way. Dr Cameron Murray explains.

AUSTRALIAN BANKS are upset. Their $30 billion per year gravy train of profits from the Australian people is finally being slowed down.

A levy on bank liabilities of 0.06% annually was announced as part of the 2017 Federal Government Budget and is expected to raise about $1.5 billion per year — or 5% of bank profits.

To be clear, the banking system is a regulated cartel. It’s primary function is to provide a public good in the form of the money supply of the country. As such, we would expect it to be uncompetitive and use tight regulatory controls to ensure that the privileged position of private banks is not being abused.

In my book, Game of Mates, I explain that the result of this uncompetitiveness and lack of adequate regulation in Australia is that over half of the banks' profits can be considered economic rents, which could be taken back with better regulation and shared with the public at large.

I want to use this article to explain in detail the underlying administrative mechanics of why any modern banking system is necessarily uncompetitive.

This tax deductible bank levy is an an absolute farce . #auspol pic.twitter.com/1vRe6xfUly

By controlling the second function of banks by making them use a currency controlled by the central bank, it indirectly controls the former function of money creation. No one bank can rapidly create new money by writing loans faster than the rest of the banks. If they do, when the borrower deposits the money created into an account at a different bank, like when they use the loan to buy a house from someone who banks with another bank, it will require the originating bank to settle this payment flowing from their bank to a different bank with their central bank money.

This process reduces their net asset position and increases their costs. They can’t continue to do this. What limits their rate of money creation through new loans is how fast other banks are creating money and transferring central bank money to them. Each individual bank is constrained in their money creation function by their settlement function.

Economist John Maynard Keynes wrote as such in his 1930 Treatise on Money:

…it is evident that there is no limit to the amount of bank money which the banks can safely create provided they move forward in step.

The words ... ['provided they move forward in step' above] ... are the clue to the behaviour of the system. Every movement forward by an individual bank weakens it, but every such movement by one of its neighbour banks strengthens it; so that if all move forward together, no one is weakened on balance.

The Australian bank data shows this process in action.

Below are two graphs.

The first details the size of the loan book of Australian banks: 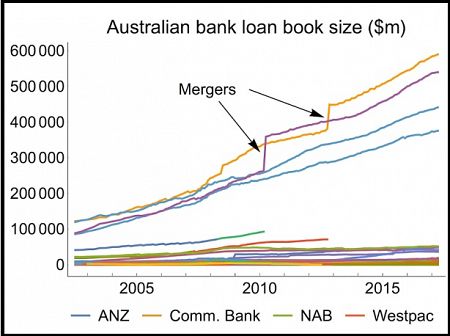 There is a clear concentration here and a surprising regularity to the trends at all banks.

To show these trends more clearly, the next graph shows the monthly growth of the loans made by the four major Australian banks: 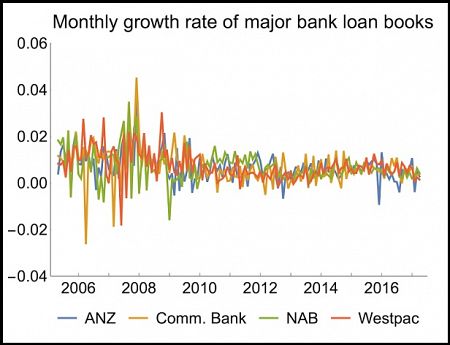 As you can see, there is no sustained deviation by any banks from the core growth trend. All banks are moving lock step, as they should.

The whole point of a central banking system is that the growth rate of loans for all banks in the system will quickly equalise. If you are a small bank, this means you can never grow abnormally fast in order to gain market share by competing for loans with the larger banks.

Any central banking system is therefore, by definition, unable to be competitive.

In Game of Mates, the solution proposed to stop the economic losses from the abnormal profits of the protected private banking cartel is to let the central bank itself offer basic low-risk lending and deposit functions directly to the public. Because it has the ability to create for itself its own central bank money, it is the only entity that can grow faster than the existing banks in the system.

Of course, the reality is that the solution would be a far greater hit to bank profits than the small levy proposed. In fact, it would likely take back over $20 billion per year in profits from the private banks, which would be shared with the Government through its profits on banking operations and with its bank customers through lower costs.

If the banks are upset about a levy of just $1.5 billion a year, they are going to really crack it when they hear this proposal!

Dr Cameron Murray teaches at the University of Queensland, blogs at fresheconomicthinking.com, tweets at Rumplestatskin and his Facebook page is Fresh Economic Thinking.

Details for the Brisbane book launch of Game of Mates on Tuesday, 23 May 2017 are available here.

If you are in Brisbane on 23rd May, come to my Game of Mates book launch. https://t.co/kzogGUQwXy

27 April 2017, 5:00pm The Queensland CCC is ignoring the big question: why are councillors such targets ...
Join the conversation
comments powered by Disqus
News updates