Home carbonation company Sodastream are on a mission to rally support against the dangers of plastic bottle pollution — and getting up the nose of Coke by doing so. Managing editor David Donovan reports. 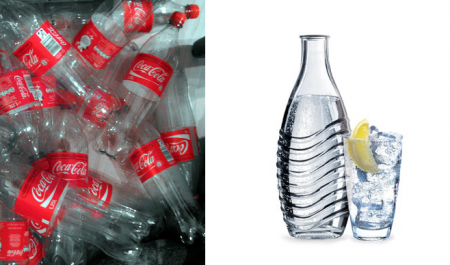 DID YOU have a Sodastream as a kid? I did. Great, weren't they? Somehow, since then, I've forgotten all about them.

Sadly, I wasn’t even aware they still existed — I though the promise of turning water into soft drink in 10 seconds had gone the way of the slinky and the hula hoop. [Note to self: check to see if slinkies and hula hoops are still popular.]

Well, anyway, this British-based carbonation company, which was established way back in 1903, is still around and, surprisingly at least to me, they now seem to be bigger now than ever. Sodastream's website claims 10 million people have taken their challenge to stop using cans and plastic bottles and that they distribute their home carbonation machines into 40 countries.

Part of the reason hordes of people are turning away from plastic bottles now, it seems, is because of increasing awareness about the wasteful, harmful and polluting effects of plastic bottles, including such environmental blights as the Great Pacific Waste Patch:

It appears Sodastream is to expand its educational “Cage Exhibit” display worldwide in conjunction with an annual “Un-Bottle the World” day on July 16, aimed at rallying support against the dangers of plastic bottle pollution.

The company says the Cage Exhibit is an environmental showcase highlighting the amount of plastic bottles and cans that an average family throws away over 3 years. The contents used in the exhibits are removed from garbage dumps or other trash locations. To raise awareness about the damages of plastic waste, Sodastream will unveil 20 new Cage Exhibits at international airports and other high traffic locations throughout the month of July, beginning on July 16.

[Neither Independent Australia nor the author received any compensation for this piece from Sodastream or any other organisation; this story is published by IA as part of its commitment to the environment and support for ethical and innovative business practices. If your business is doing the right thing, perhaps against stiff opposition from big polluters, please get in touch with us.]