Shop Small! The duopoly of Woolworths and Coles is killing small business

If the Americans are screaming blue murder because Wal-Mart and its competitors have 23 per cent of their market, why do we put up with Coles and Woolies hogging over 80 per cent of ours? Mel McCartney urges us to Shop Small or face big price hikes.

IT WASN'T THAT long ago that the aisles of the two major supermarkets in Australia were full of products other than the Coles and Woolworths (WWs) "private brands".

This is not new and they model their business models on Tesco in the United Kingdom (U.K.), right down to their recent convenience store trials in Victoria but we will get more into that shortly.

Not only do they control over 70 per cent of the supermarket share out of the $82.5 billion grocery sector, but they both have their fingers in many other pies.

WWs for example, is not only the largest operator of hotels and poker machine venues in the country, but it's also the largest take-away liquor retailer in Australia. WWs and Coles also make up half of the Australian petrol retail market, combine this with their discount shopper dockets for alcohol, petrol and food and their strangle hold is clearly apparent.

Interestingly there are no links to either company on labels of wine brands that are owned by either of the two like they do with their "private brands". Some brands include Cradle Bay, Bay Estates, Oak Lane, Iron Hill and South Island. Out of every dollar that is spent in a retail store in Australia 88c is spent at WWs or Coles.

In comparison to the U.S. where 12c out of every dollar is spent at their largest retailer which is Wal-Mart, and it commands around 30 per cent of the market share.

In August 2006, Coles attempted to make inroads into the pharmacy market, where it wanted to establish a presence by purchasing Pharmacy Direct. They ended up selling it in 2009 at a reported loss of $28 million or more after a three year battle with the Pharmacy Guild of Australia (PGA), which concluded with legislation preventing Coles and the like from operating pharmacies within supermarkets.

At the end of June 2014 however, WWs announced its intention of offering in-store "free health checks" by hiring final year pharmacy students, graduating pharmacists and nurses to conduct health checks such as blood pressure and cholesterol.

Six stores have been trialling the system in New South Wales (NSW) and Queensland with the intent of expanding the scheme nationally, and the idea being that if any customers have readings outside of the normal range, they will be directed to a doctor or pharmacist for medical advice.

But the PGA is concerned about the move. The Guild's George Tambassis said it is an attempt by the supermarket to

"hoodwink consumers into believing they can get professional pharmacist advice and products from a supermarket.”

"It's a hypocritical and frankly a public disservice that a supermarket giant which profits so heavily from retailing tobacco and alcohol products – which are the biggest preventable causes of ill health and death – is claiming to be interested in health care.”

The next five-year pharmacy agreement between the government and the industry is due this year in 2015.

The then NSW Labor government sold and privatised the NSW lotteries to the Tatts Group (Tatts) in 2010. A condition of privatising it was a five-year moratorium that prevented the big two from selling lotto tickets and Scratch-its tickets. It also ends in 2015 on the March 31, not long after the NSW state election.

With no review of the agency protection period being undertaken to identify a future strategy, Tatts will have free rein from April 1 to sell through any retailer it chooses.

NANA presented a petition to NSW Parliament. The petition read:

‘To the Honourable the Speaker and Members of the Legislative Assembly of New South Wales in Parliament assembled. The privatisation of NSW Lotteries in 2010 was accompanied by a five year Agency Protection Period during which all existing arrangements with agents were to be maintained. The Agency Protection Period will expire on 1 April 2015 at which point the protections for existing lotteries agents will cease. This is likely to have long-lasting and devastating consequences not only for the existing agencies, but also for the broader local small business community. We the undersigned call upon the NSW Government to indefinitely extend the Agency Protection Period and enshrine the protective measure to support the viability of key community small businesses.’

The petition, which garnered many signatures was handed to the NSW government. Upon popular demand, this one was set up too, if you would like to sign there is only a few hundred or so to go.

The state-sanctioned supermarket duopoly does a great line in patriotic Australia Day merchandise. (Made in China). pic.twitter.com/MYdksXBR

As mentioned in the first paragraph, convenience store trials have begun in Victoria and Sydney and the initial branding for the "Woolworths' corner store" push is "Woolworths Small Format". WWs is reportedly snapping up land for smaller corner stores in the centres of our capital cities, taking on 7-Eleven and other similar-style operators.

7-Eleven has done very well selling Tatts products and no doubt the multinationals want some of the action. Tatts wants to introduce a new Franchise Agreement to Newsagents in NSW in July this year and it is also demanding a corporate branded Tatts shop fit-out from all of the 1,500 agencies (including 300 small retailers selling lottery tickets), using only Tatts approved shop fitters who have to buy Tatts acquired components.

With a minimum cost of $22k and "with no contribution from Tatts", if you want to remain a lottery agent, things look very dire indeed.

Tatts also wants to increase "direct debit" access to newsagents accounts for payments from once a week to twice a week. Cash flow is integral and with prize payments, card transactions and the reimbursement of them to consider, what will this achieve exactly? Is it a designated push against small business or a lack of forward thinking?

NANA Chief Executive, Andrew Packham, says the flow-on effect could be devastating for newspapers and that the new Lotteries Franchise Agreements would be economically disastrous. He warned:

“From the April 1 next year, the government oversight of a huge part of newsagents’ business will no longer be there and the operator will be able to do whatever it wants......The newsagent system was created to ensure low cost home delivery of newspapers. That entire system is under threat."

Mr Packham also said that removing income from lottery tickets would render 60-70 per cent of businesses non viable. A mediation with Tatts and the Newsagent Association of NSW and ACT (NANA) in November last year produced no results. The five year moratorium rule was meant to include meetings every six months between Tatts, NANA and the NSW state government, this did not occur.

What has eventuated is Tatts having talks with the major players about lottery sales, following lottery tickets trials in Victoria at eight Coles Express stores recently. Mr Packham said,

“we will undertake other measures”

“We’re now relying on a political solution to a commercial problem.”

NANA are lobbying state members of parliament and forwarding their concerns to the small business commission.

“We’re distressed by the state government’s lack of support for our small business, especially when they are a government that says they are for business……They’ve had five years to make some decisions on this, and nothing has happened so far. I find it very distressing. The tireless enthusiasm of newsagents has built Lotto up; we’ve built their business up to where it is now. Lotto is gambling, and this will put it into supermarkets and normalise it.”

The Australian Newsagents Federation (ANF) has written to Bruce Billson, Minister for Small Business, and Malcolm Turnbull, Minister for Communications, to outline how the newsagency channel is well-placed to take on more of the Australia Post services following reports in the Australian Financial Review that Australia Post will require government assistance to urgently restructure its letter service in the New Year in order to remain viable. ANF CEO Alf Maccioni said:

"The ANF was shocked to see how Australia Post is looking for a government hand out to help with their struggling retail outlets. We have written to both Bruce Billson and Malcolm Turnbull reminding them again that there is a network of retailers, larger than Australia Post out in the Australian Retail landscape that already runs a large amount of LPO and are willing to help take on more business. Let's look at saving the government some money by using the largest independent retail network in Australia." 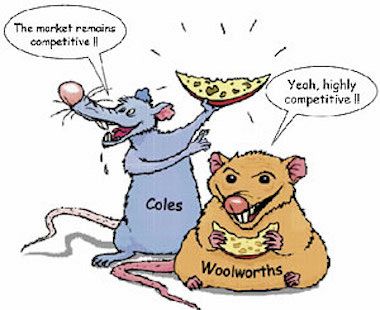 In June 2013, Bob Katter introduced the Reducing Supermarket Dominance Bill 2013, it didn't get anywhere but had the support of Independent senators Andrew Wilkie and Nick Xenophon.

“The Americans are screaming blue murder because Wal-Mart and their competitor have now reached about 23 per cent market share. Here we have two supermarkets with a market share of over 80 per cent, so if they decide to cut down the amount of money they are going to pay farmers and jack up the price to the consumers, they can, because there is no competition”

No competition perhaps with the two majors but you would think plenty of employment, right? Well according to a Price Waterhouse Coopers report on the state of the Australian grocery industry shows that despite controlling most of the market share,

WWs, Coles and Aldi only employ 43 per cent of all grocery employees. In contrast, independent retailers with a 20 per cent market share employ 57 per cent of our nation’s grocery staff.

Clearly this can't go on for much longer. We haven't even touched on the other brands that they own and fairly recent moves into the financial markets. The Australia Post idea is good as was Senator Katter's Bill above but who will have the mettle to tackle them?

Please "Shop Small" whenever you can, or we may end up with only two choices to do our entire shop at.

This article was originally published on http://melmacpolitics.com/ on January 12, 2015.