Abbott's bodyguards in the Murdoch media are embarrassingly attempting to rewrite his dismal Davos performance as some sort of triumph, writes Matthew N. Donovan.

THE ABBOTT PRAETORIAN GUARD at Rupert Murdoch's radical rightwing broadsheet The Australian – and, indeed, all his other newspapers – have closed ranks around their man in The Lodge — a man under siege from all sides.

He seems to accrue baggage every single time he opens his mouth. The outrage on social media is palpable.

The Australian likes to conveniently disregard Twitter as being 'Left biased'.

The same, however, can't be said for Facebook, with its much larger user base. Facebook is also lighting up with fury over the regressive agenda of the Coalition.

People are unimpressed and they are angry about Abbott's vision of helping the big end of town at the expense of the social safety net that everyday Australians rely on. There is a widespread feeling we deserve better than the lot we have in charge now.

The Murdoch media is busily trying to spin Abbott's horrendous showing at the World Economic Forum in Davos. It's made worse by the fact he is currently the president of the G20.

Unfortunately, the man whose turn it was in The Weekend Australian to plead Abbott's case, political editor Dennis Shanahan, isn't so clear about his motives and objectives when writing his opinion pieces. He spurns Labor every time he mentions them – no matter what the issue – and he praises the Coalition at every possible opportunity.

Just the way Murdoch likes it.

It would not surprise me if he – along with Paul Kelly and regular economics correspondent Henry Ergas – is in regular contact with Murdoch about his preferred line.

They are the Sun King Rupert's de facto voices in The Australian.

I also assume Dennis talks to Abbott frequently, as Abbott makes it his business to talk regularly to those in the media who are friendly towards his reactionary agenda — and only to them.

This would easily explain why he relishes talking to 2GB and other divisive and heavily biased radio schlock jocks.

Abbott – along with his ministers – dodges appearances on ABC Lateline, 7:30 and, especially, Q&A.

This can mostly be put down to Abbott's overly controlling chief of staff Peta Credlin — the wife of the Liberal Party federal director Brian Loughnane.

This woman has more power than the bumbling and disregarded deputy PM, Warren Truss, of the increasingly irrelevant National Party. She is the one to blame for several ministers hiding in the Liberal Party witness protection programme — most prominently, the disgraceful Immigration Minister Scott Morrison.

Truth, facts, scrutiny and accountability scare this Government witless. Disregard any election commitment in those regards. 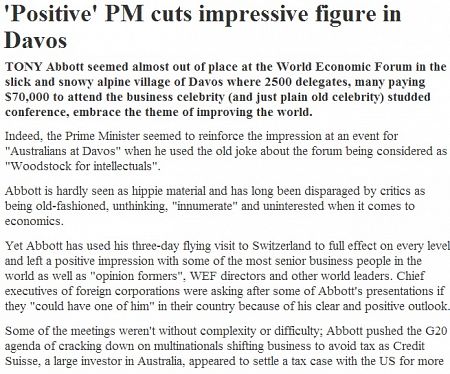 A quick look at the latest polls suggests all is not "beer and skittles" for the Abbott Government, as Dennis tries to suggest, with Reachtel poll out yesterday giving Labor a commanding 53-47 two-party-preferred lead.

'... old-fashioned, unthinking, 'innumerate', and uninterested when it comes to economics.'

A quick Google search of Tony Abbott or a visit to YouTube would suggest Dennis either hasn't done his research on this man, believes in his agenda or is utterly clueless and blind to reality.

Maybe all of them.

Tony Abbott is the most conservative – and gormless – leader Australia has had since the early 1970s under the hopeless and out of touch Billy McMahon. That's right, Billy McMahon (pictured right) — the Prime Minister who was so abysmal, Murdoch refused to support him during the 1972 Federal election.

Nobody with any sense can dispute Abbott's conservatism.

His notorious history at Sydney University is enough to suggest he is completely out of step, destructive, negative and aggressive. He happily and cunningly walks the path of negative fear politics and brings out the worst in people. This might be expected in university, but at the highest level it disgraces the good name of our country.

Some Young Liberals have followed his lead, especially on social media. Nasty trolls with no policy knowledge whatsoever and a backward view of the world.

Dennis says how happy 'senior business people' were with him and his speech.

He says foreign business leaders were all saying they wished they 'could have one of him'.

They want him? They can have him! Tony Abbott is the leader that the business community wanted desperately and helped elect. Why wouldn't they be happy? While business falls over itself to take advantage of Abbott's selfish business orientated agenda, the attacks on ordinary Australians and nasty surprises keep piling up.

Do you get this from Dennis?

No, of course not.

Abbott's attacks on Medicare, social security, the disabled, the environmental movement, education, the LGBTI community and health, among many others, haven't gone unnoticed by those who matter — the voters.

Abbott refuses to engage in the international efforts to mitigate climate change and declined to be involved in the CHOGM climate change fund. Let's not forget that this government failed to send Environment Minister Greg Hunt to a key climate change conference recently and irritated many nations with their obstructionist attitude to measures to address climate change. His government earned Australia the "Colossal Fossil" Award for being the most retrograde nation at the conference.

Makes so many of us so proud.

Dennis obviously agrees government should "get out of the way" of business and let them make their money in peace as Abbott suggests.

I ask Dennis to wind his mind back to 2008. The world economy was in compete free fall.

Why? Deregulation and inept oversight of unfettered capitalism in the United States.

Tony Abbott actually criticised Australia's action to halt the impacts of the GFC on Australia. That would have had many eyes in the room rolling.

A true economic innumerate and a man who himself has said he has no interest in economics.

Not to mention his continued, impertinent and quite frankly childish efforts to drag domestic politics onto the global stage, despite being against all accepted protocols.

I sometimes wonder why I read and support the News Corp Australia monstrosity. I have to remind myself it's to call out the completely biased drivel of "journalists" like Dennis Shanahan.

A man who passes off free advertising for the Coalition Government as well thought out and impartial analysis.

Pull the other one Dennis.

You may be a writer, but you are not a journalist and your analysis – in written form or video – is truly hopeless.

In closing I share my one and only interaction with the man of the hour: 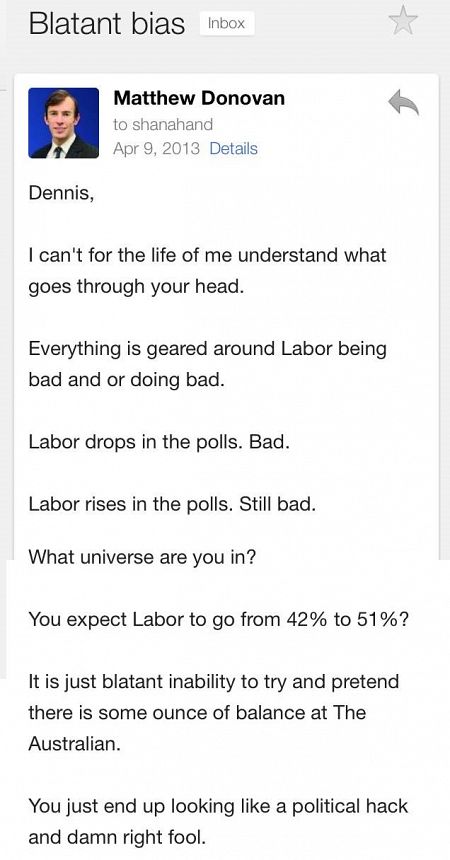 I can't for the life of me understand what goes through your head.

Everything is geared around Labor being bad and or doing bad.

Labor drops in the polls. Bad.

What universe are you in?

It is just blatant inability to try and pretend there is some ounce of balance at The Australian.

You just end up looking like a political hack and damn right fool. 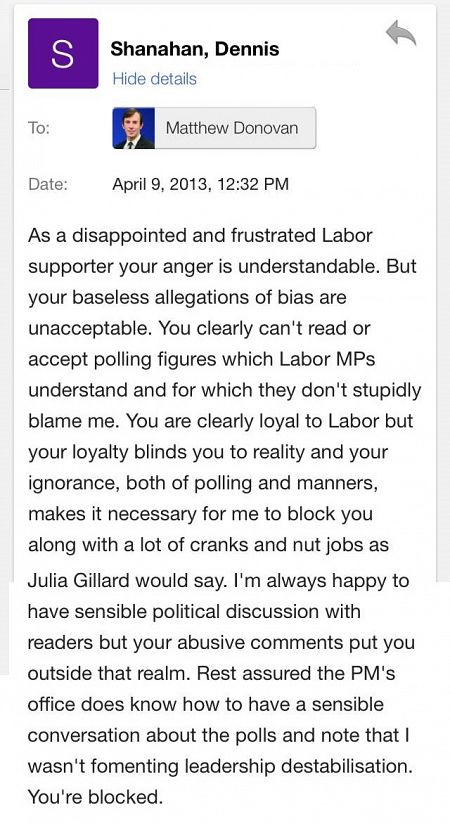 As a disappointed and frustrated Labor supporter your anger is understandable. But your baseless allegations of bias are unacceptable. You clearly can't read or accept polling figures which Labor MPs understand and for which they don't stupidly blame me. You are clearly loyal to Labor but your loyalty blinds you to reality and your ignorance, both of polling and manners, makes it necessary for me to block you along with a lot of cranks and nut jobs as Julia Gillard would say. I'm always happy to have sensible political discussion with readers but your abusive comments put you outside that realm. Rest assured the PM's office does know how to have a sensible conversation about the polls and note that I wasn't fomenting leadership destabilisation.

Dennis is more than happy to cast the first stone, but when the same level of analysis is turned back on him he has a propensity to become indignant.

A typical Tory trait in my experience.

Matthew N. Donovan is a financial Labor Party member. The views expressed here are his and may not necessarily reflect those of this publication. For an accurate account of Abbott's speech to Davos, please click here.