In his speech to the Brisbane March in March in March, organiser and former ALP state candidate Matthew N Donovan says the movement is above party politics — it is about stopping Abbott and his team sending Australia back to the 1950s.

MY NAME is Matthew Donovan. I'm lead organiser of March in March, Brisbane.

I'm a proud member of the Australian Labor Party but I'll tell you what I also am. I'm a proud Australian. An Australian who believes in the social safety net and a fair, compassionate modern and equal society that brings us together and doesn't divide us.

This is protest above party politics. We have members and supporters of many and varied parties here, brought together by their distaste for the tacky divide and conquer, fear invoking, slash and burn Abbott agenda.

This is a genuine grassroots movement with people from across the political spectrum and varying levels of political involvement.

You all come from various backgrounds and are marching for various reasons. But what is clear is we are all united in our disapproval of the Abbott agenda of yesteryear.

An agenda that more often than not plays politics rather than having a mature reasoned debate and acting in ways to inspire and build a modern Australia.

No political party started or organised this movement. I'm just one organiser. The movement is you! The good people of Australia who reject the Abbott agenda.

This is a message to all those sitting at home worrying about the direction of Australia at the moment and wondering what they can do. Get up! Hit the streets! We can get our message out there and united, make a difference!

As a member of the movement I want to say I reject how Tony Abbott is doing his job. It seems to me he takes far too much pleasure playing politics. In riling up and seeking revenge against political enemies.

This is university politics. Politics this man obviously never graduated from. The kind of games he used to play at Sydney Uni still amuse and entertain.

He is yesterday's man with no real positive vision and it's sad he leads today's Australia.

I reject him not giving his caucus a free vote on marriage equality.

I reject his deceptions and lies of the last six months.

I reject his smug indifference to the least well off while big business and the most well off are pandered too.

I reject his numerous transparent and politically motivated, self interested, appointments from his side of politics, big business and vested interests.

I reject his approach to climate change. I'm embarrassed that instead of leading in this area we are now dragging the chain.

I reject the confected budget crisis and rush to surplus at the expense of the least well off.

I most of all reject his approach to asylum seekers. I reject Scott Morrison as immigration minister and believe he should be sacked. They aren't illegal, Mr Morrison, no matter how many times you parrot this lie, we will keep reminding you.

Many hearts are heavy about how those most in need are being used as political footballs.

All sides of politics need to implement compassionate approaches that strike the right balance between saving lives and treating people like human beings.

There are many other issues that I'm concerned about but we'd be here all day.

These are some of the reasons why I'm marching.

I'm no fan of Tony Abbott's good friend and ally, our Dear Leader Campbell Newman, either but we'll save that for another day.

I know many of you are here to protest Newman's arrogant despotic far right authoritarian self serving bully boy government and the police state he has created, along with the pleasant egomaniac and ever so in touch man of the people, Attorney General Jarrod Bleijie. I should say VLAD the conveyancer, as he has become known.

Queenslanders will get their say on this shocking arrogant state government sooner than they think.

In closing, thank you for coming.

It's time to send Abbott the clearest possible message and let the international community know:

Not in our name!

The question is: will you hear our message Tony?

I say to you Mr Abbott, this isn't the 1950s, this is 2014, and you better learn to listen because we will keep fighting until you hear our voices and deliver us a modern Australia we can be proud of!

It's time you brought us together instead of divisively playing us off against and using fear and prejudice to get your way.

We've had enough of that from you for a lifetime.

Community Cabinet on the Gold Coast have locked the community out! #auspol #qlspol @bettsie2u @vanbadham pic.twitter.com/9box9pCZgZ

Matthew N Donovan is a former Queensland ALP candidate. He is no relation to IA managing editor David Donovan, who spoke at the Gold Coast March in March. 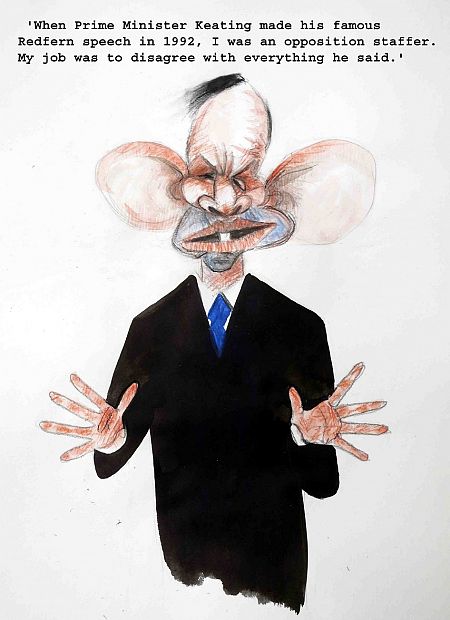