Naomi Fryers examines the curious case of 'trouble in paradise' and the bag of sunscreen in Bali – that may or may not have been detonated by bomb experts – and which had the Australian media talking.

AUSTRALIAN GOVERNMENT RELATIONS with Indonesia are still raw following the execution of the Bali nine duo Myuran Sukumaran and Andrew Chan. This is clearly a time when people should tread lightly, in line with cultural sensitivity —particularly given the Boycott Bali campaign launched by Australians which drew the ire of Indonesians. So, are the mainstream media treading carefully with our international relations or contributing to mass hysteria?

At between 10 and 11pm on Saturday night (AEST), 7News Sydney published the following sensational update via their Twitter account:

This message was unsurprisingly disseminated far and wide and people expressed shock and concern. Could it be the work of terrorist organisation? Why were more Australian lives at threat? Why the anti-Australian sentiment?

The public retweeted the message to warn fellow Australians, both at home and in Bali.

However, within minutes the Sydney Morning Herald has published an article debunking the bomb threat.

The Sydney Morning Herald piece gave slightly more details on the "false alarm" which was reported as a suspicious package – that turned out to be a bag left behind by a worker – located 100 metres from the Australian Consular General’s residence in Sanur. The report also indicated that the package had been "blown up". Yet, intriguingly, they proceeded to list the contents of the bag, which contained an aquarium water pump and nothing relating to a bomb.

The conflicting version of events, that had now played Australian-Indonesian whisper halfway around the world, led Independent Australia to track down a third account of the events from Indonesia itself. After all, they were at the heart of the action — or lack thereof.

And so comes a third version of events via the Jakarta Post, which was headlined:

Understated and demure, but arguably more accurate was the reporting of how the bomb squad had been deployed to the scene.

This article stated that the bag had been examined rather than "detonated". It then listed the contents which contained a cable, money, licenses and a tube of sunblock. And so it would seem that the only real fighting taking place was someone’s personal war on UV rays.

When questioned on the headline, 7News Sydney told IA, don't shoot the messenger!

'We were reporting that facts as told to us by Indonesian Police at that moment in time. eg 11pm Saturday.'

When asked to comment on why they never retracted the headline, they became very quiet and sheepish. In fact, they didn't respond at all. Funny that. 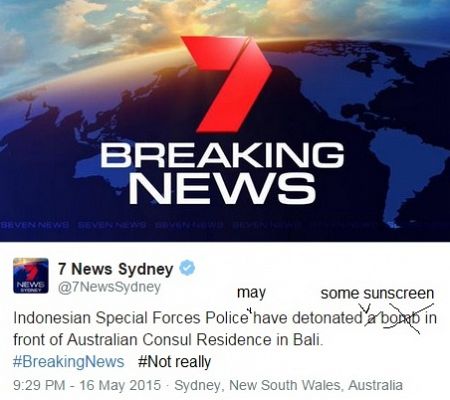 Here, 7News Sydney, we fixed it for you!

While Independent Australia is pleased that there was no collateral damage from this incident – other than maybe to the bag and perhaps the reputation of Australia’s mainstream media – this shonky reporting surely begs questions about 7News Sydney’s reporting code of ethics. It is never appropriate to create one’s own version of "truth", based on limited information and which later turns out to be false.

With the crossing over now of mainstream media reporting with social media, which often utilised for entertainment purposes) these sorts of hysterical "click bait" headlines are becoming far more prevalent. Furthermore, it appears as though media outlets are increasingly not verifying their news sources until after they have widely disseminated the "news".

This is particularly problematic when tensions between nations are of concern.

It’s time for Australian journalists to quit the hysteria and get on with the job of basic fact checking, even when chasing an exclusive.

The only thing about these events that were explosive were the headlines.

11 October 2020, 4:00pm Has the Government learned anything about the need to adequately fund and oversee ...
Join the conversation
comments powered by Disqus
News updates