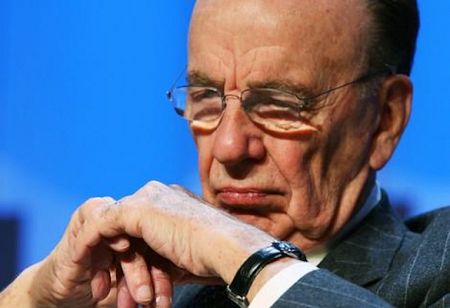 RUPERT MURDOCH’S self-righteous (but very well paid) slaves – like Dennis Shanahan and Paul Kelly – beavering away at the Weekend Australian, really overdid themselves on the weekend.

When Rupert held his editorial conferences, it was always a one man show, slowly turning over the pages of yesterday’s paper until he came to something that annoyed him. He would lower his heavy eyebrows into a frown, slap his desk noisily and bellow:

Long pause — the tension in the room electric. Then:

“Why do you do this to me? Why do you write this rubbish?”

Another long pause, as he turned over more pages — then another explosion.

I often saw journalists and sub-editors and chiefs of staff humiliated like this. Some of them I had even served as a copy boy some years before. Some of them were highly regarded and thoroughly experienced in fine journalism, with lifetimes in the profession.

Rupert Murdoch brought a whole new style of newspaper management into the game.

He was reigning by fear — unlike his father, who would send little notes to such men, sometimes praising them, sometimes tut-tutting about some little thing that irritated him. Those notes still exist in the Keith Murdoch personal papers collection in the National Library in Canberra. They are always polite, always reasonable.

Why Rupert was putting on shows like this with me, a visitor, in the room, I never understood. Perhaps he was demonstrating to me how a newspaper magnate should operate. It was a policy I could never follow.

I could see the result of this kind of training in the Weekend Australian.

Under the heading: ‘There’s more to leadership than popularity in the opinion polls’, and an opening paragraph that said: ‘Julia Gillard has broken her last promise in abandoning a budget surplus in 2013', there was no mention of the fact that times change, events change.

As John Maynard Keynes once (may have) said:

“When events change, I change my mind. What do you do?”

Budget surpluses are not profits, as they are in a small or large business. Budget surpluses are projections that allow elected governments to make plans for the future. With only one or two exceptions, every country in the world is expecting a smaller or non-existent surplus in 2013. It’s not the end of the world as we know it.

Shanahan goes on to say:

It’s [the government’s] economic strategy and political rhetoric are exposed as contradictory, flawed and shallow.

Now, more than ever, the prime minister, the treasurer and the Labor government have to rely on a political strategy of destroying Tony Abbott’s character and leadership.

Shanahan’s waffle goes on for 28 paragraphs of such nonsense and leaves me only with the thought that it is The Australian that is exposed as flawed, contradictory and shallow. Tony Abbott has done a fine job already of destroying his own character and leadership.

Never mind. This is the stuff that makes Rupert Murdoch happy, as he proceeds with his perennial ambition to establish governments by the rich and for the rich all over the world.

There is an equally puerile article below Shanahan’s, and it is written by another Murdoch favourite — Paul Kelly. I could not bear to read more than the first two sickening paragraphs of a eulogy about Tony Abbott and his particular skill and enthusiasm in using his fists.

Clearly, the comment I made in my most recent article is real. It was about Rupert Murdoch’s failed attempt to buy the US presidency and hand it to the once popular former US army General David Petraeus, a man he believed he could handle — as he once handled Margaret Thatcher and Tony Blair.

Indeed, there was a time in 1972, when Rupert believed he could handle Gough Whitlam, after he gave Whitlam the keys to The Lodge. Alas, Rupert failed; Gough was too wily. In power, he refused to take Rupert’s calls. So Rupert spent the next two years driving one of Australia’s best prime ministers from office in another totally contrived dirty tricks epic.

And so it goes on.