The NSW Government disputes radio bully Ray Hadley’s claims police aren’t investigating him and his son over an alleged assault at his house. Peter Wicks reports.

OVER THE LAST few weeks, the NRL has been rocked by claims of drug abuse and drug cheats, something I have touched on before.

One of those who came rushing to the defence of those clubs and the NRL code and Hoppo Bumpo (???) in particular was Ray Hadley, who's been in the news a lot lately. Ray is fast becoming better known for his anger management, his parties at home, and hisratings in freefall as he seemingly lost approximately 20% of his listeners after the bully stories started emerging.

In the above video, Hadley was quick to condemn the government, and in particular Kate Lundy and Jason Clare the Minister for Sport, and Minister for Home Affairs and Justice for calling a press conference and making a big fuss out of things “without a skerrick of evidence”. Ray was however careful not to criticise the Australian Crime Commission and its President John Lawler. John is the brother of Michael Lawler, Vice President of Fair Work Australia fiancée of Kathy Jackson, who is currently under investigation for robbing HSU members blind for years.

Hadley was desperately trying to tell us the government was at fault in his familiar “Blame Julia” for everything approach, however headlines like the one pictured below show just how out of touch Hadley is with reality. Ray apparently thinks giving horse drugs to players on a grand scale is nothing to be concerned with, which I guess tells us how seriously we should be taking anything Hadley says. 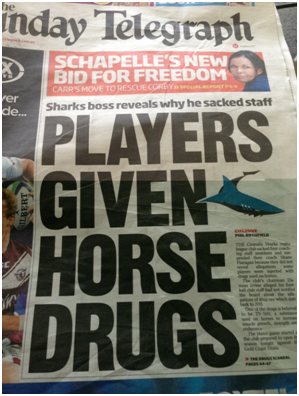 I wonder if Ray was suggesting that the work of years of investigation from the Australian Crime Commission should have been ignored. If that is the case, it would be a rather irresponsible suggestion. As it turns out, for all of Hadleys hot air, it now looks like that the actions of Jason Clare and Kate Lundy seem entirely appropriate. I don’t think either will be expecting an apology from Hadley any time soon though.

There has also been a further development in the matter the events that took place at the Hadley household during a party in September last year that I covered in detail here on the 6th March.

The events involved an intoxicated 17 year boy, an allegedly broken gate that has mysteriously yet to need repair, and allegations of Ray's son Daniel Hadley, an off duty cop, kicking the boy in the face. In a final act of indignity and indifference, the struggling child was then allegedly thumped in the head from behind by Ray Hadley in what would appear to be an act even more gutless than hitting a woman, something Hadley has often been accused of in the past. 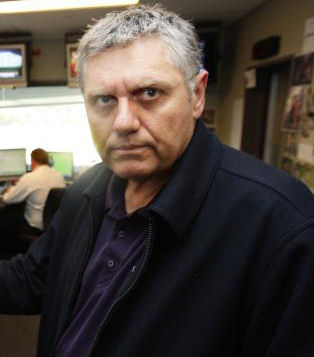 You may remember that Hadley was all over the News Ltd press proclaiming his and his son's innocence in articles that stated that the police investigation was finished.

Hadley even went so far as to say that the police had offered an apology to his son Daniel. However, Hadley would not respond when I tried to reach him with queries, and the police media unit could shed no light on this supposed apology, with the comment added that it would be highly unusual.

There were also questions that remained involving the conduct of police during the investigation in regards to leaks to Hadley's lawyers and the intimidation of witnesses to not make statements. You may also remember that I mentioned I was going to contact the NSW Police Minister Michael Gallacher.

Today I can let you know that I have received a response from the Ministers Office, from Geoff Provest, Parliamentary Secretary for Police and Emergency Services.

Below is a link to the letter I received in full, normally I would not publish this entire letter, but as at the end he addresses our readers, I thought I should so readers can observe what has been written for them.

The part that mostly interested me was where Mr Provest said:

That, to me, kind of conflicts with the statements printed in News Ltd’s Daily Telegraph as coming from Ray Hadley.

"I got a phone call last night from police to tell me that after what they called an exhaustive and thorough investigation, there would be no charges laid against me and my son…"

"As my son can't be quoted as a serving police officer, I can be and I can say that my son has been offered an apology by police…" 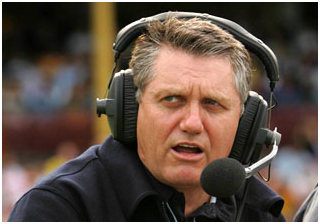 So, who are we to believe, Ray Hadley and News Ltd ‒ who employs Hadley and until recently had a major stake in the NRL ‒ or do we believe the Police Minister, his Parliamentary Secretary, and the Assistant Police Commissioner? Hmmm ….

I am sure that this won’t be the last we hear on this matter, or the thuggish behaviour of the alleged “men” in the Hadley household.