A scathing assessment of the ethics of Fairfax Media by the Press Council confirms Fairfax’s decision to follow the tawdry lead of Rupert Murdoch’s News Corp in falsifying ‘news’ for political ends, writes Alan Austin. 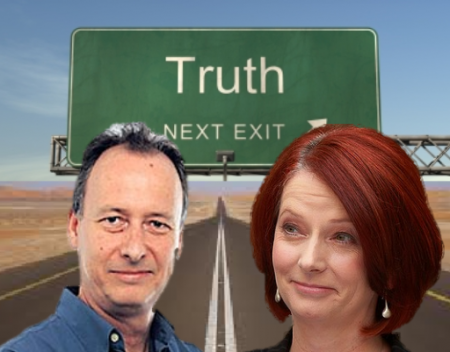 The adverse findings relate to two of Baker’s many articles on the matter of former PM Julia Gillard’s legal work for a trade union in the early 1990s. His stories have peddled innuendo, half-truths and falsehoods for nearly a year

The two in question were the short news item, ‘Gillard gave support for union group's registration’ and a longer analysis piece, ‘Parting company: Brothers no more’. Both ran in The Age, The Sydney Morning Herald and The Canberra Times last October.

The Council identified several deficiencies. There are others it didn’t.

The first false statement in the brief news item was that another law firm had been ‘pressing Slater & Gordon for more than a month’ to give former union member and self-proclaimed whistleblower Ralph Blewitt ‘access to the association incorporation file’.

The second was that a former lawyer had ‘accused the firm of stalling’ in handing over the file.

Baker wrote in the article:

‘The file is believed to contain a copy of the letter Ms Gillard sent to the Corporate Affairs Commission affirming the association would be devoted to workplace safety.’

The law firm has consistently said there was no file. The Press Council now confirms Baker’s claims were false.

Problematic assertions in the longer story were, firstly, a quote from former Slater & Gordon partner Nick Styant-Brown claiming the firm:

“…in my view, have this sort of untrammelled objective of protection and hiding adverse material at all costs.”

Secondly, Baker described a draft by senior partner Peter Gordon as ‘a document that made a mockery of [a] media statement’ issued by the firm.

The Council determined that Slater & Gordon should have been asked to respond before publication. Had this happened, these falsehoods would have been exposed.

In a bizarre defence, Mark Baker wrote to Crikey after their report:

‘My story quoted former lawyer and activist Harry Nowicki accusing Slaters of stalling on requests to hand over details of an unofficial file Gillard kept in her office detailing her slush fund legal work.’

It seems Fairfax thinks it’s okay to run false stories if the lies are concocted by a third party?

The Press Council, however, says this is not okay.

‘We made a considered decision not to seek a response from Slaters … because we had … genuine concerns that if we flagged details of our reporting we risked a court injunction to stop publication.’

Now, why would the law firm seek an injunction? And why, in a country which values freedom of speech, would one possibly be granted? The only answer is if the stories were not true.

Does this amount to an acknowledgment that The Age knew in advance that its claims were concocted?

Two other aspects of Baker’s vendetta deserve condemnation, although neither was the subject of Press Council judgment this time.

His articles assert repeatedly that Gillard told Slater & Gordon partners in 1995 that an association she helped union officials incorporate – the Australian Workers Union Workplace Reform Association – was a “slush fund” set up to bankroll union electioneering.

But Gillard said no such thing.

An incorporated association is legally constituted by the Corporate Affairs Commission after certain requirements are met.

What Gillard referred to in her discussions with colleagues as a “slush fund” was a bank account — not the association. They are separate entities.

‘Ms Gillard resigned from Slater & Gordon after being challenged about her role in establishing the association.’

False. There was a routine exit interview conducted after Gillard resigned to enter politics. The continual implication that the interview led to the departure – read sacking – rather than the other way around, is a rather reprehensible distortion — if not an outright lie.

In his curious denial, Baker repudiated the judgment and blasted the Council. His memo to Crikey asserted

‘…this finding is flawed and illogical — like so much of the work of the Press Council.’

What he and The Age stand to gain from this dummy spit is puzzling. There would not appear to be much political gain to be made in embarrassing or distracting the former PM now she has left politics.

Perhaps Fairfax is seeking to emulate Murdoch in savaging its critics.

‘…a cultural tendency within parts of the press vigorously to resist or dismiss complainants almost as a matter of course.’

‘…high-volume, extremely personal attacks on those who challenge them.’