DURING THE WINTER of 2021, I wrote a complaint to the ABC about a Lisa Millar News Breakfast interview with Victorian Premier Daniel Andrews.

The nub of the complaint was Millar’s insistence on knowing why the Premier was denying Victorians freedom during the COVID lockdowns whilst the NSW Premier was bestowing freedom upon her constituents?

The complaint noted that “freedom” had become, by then, an inflammatory word, used to incite anti-vaccine rioters, many of whom were in daily breach of Victoria’s health orders as they congregated in Spring Street revealing a gallow and noose that had been menacingly erected for the Premier. 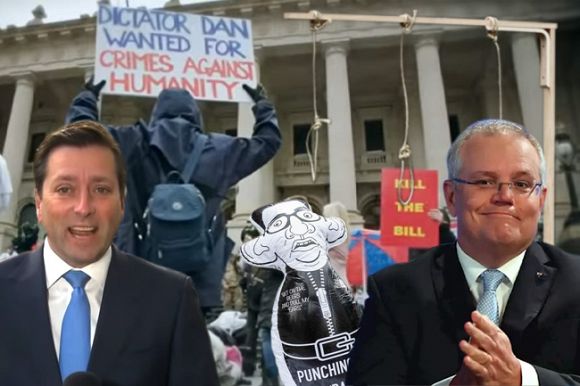 In a polite answer to my complaint, an ABC customer service officer informed me that Millar was simply taking a legitimate "devil’s advocate" approach to the interview, as journalists customarily do. I was advised to take the matter to the Australian Communications and Media Authority (ACMA) if that answer did not satisfy me, which I did.

My submission to the ACMA accepted the validity of devil’s advocacy as a questioning style but argued that Millar had not used the technique correctly. Devil’s advocacy requires the questioner to distance themself from the question. They might ask, “Some people say you are denying Victorians freedom. How do you answer that?” Or, “Your critics argue that you are denying Victorians freedom. What do you say to them?”

Murdoch’s Herald Sun newspaper was the primary critic I had in mind, believing that its editorial approach had incited the anti-vaccine lawbreakers. The way I saw it, Millar didn’t distance herself from the question but appeared to absorb the Herald Sun's narrative as a default position. She took it upon herself to uncritically adopt the lawbreakers’ “freedom” mantra and accused Andrews of denying freedom to Victorians. While Millar is entitled to her opinion, I questioned the way she used her role as an ABC co-anchor to invest the NewsCorp-inspired question with the authority of the national broadcaster.

If Lisa Millar wants to cry foul, maybe we look at this interview, and the one with Andrews. The constant use of "freedom" to describe getting out of this. It's murdochian in nature and shows clear biases.

ACMA recently came back to me after many months with a polite answer to my submission. It effectively confirmed the ABC's position that Millar’s interviewing style was within the bounds of acceptability.

As the Federal Election approached, Millar was not alone amongst ABC journalists and presenters in adopting NewsCorp narratives in the way questions were framed to Morrison and Albanese respectively. ABC viewers began to observe that not only were young journalists in the national press pack hyper-aggressive when covering Albanese press conferences, but some older journalists who had built reputations for fairness and objective reporting over many years, were behaving in ways that were out of keeping with their past performance standards.

A case in point was Fran Kelly, who had built a loyal ABC audience for many years on Radio National. Having moved into Afternoon Briefing on television before the 2022 Election, she developed a habit of questioning Labor candidates in ways that suggested they were departing from accepted practice and needed to explain themselves.

One afternoon, Kelly challenged then Opposition Leader Albanese by proposing that he couldn’t possibly be thinking of making the character of Prime Minister Morrison an election strategy. Morrison's own party colleagues, meanwhile, had labelled their leader a "psycho", a "compulsive liar", a "fraud", an “absolute arsehole”, and “a horrible, horrible person”.

French President Emmanuel Macron also revealed Morrison to be a liar. And U.S. President Joe Biden refused to call Morrison by name, opting instead to display his disdain by referring to him dismissively as “that fella down under”.

Some journalists speculated that Biden may have forgotten Morrison’s name but his speaking notes would have prominently displayed the names of the other two participants, Boris Johnson and Scott Morrison. Biden has a form of showing disdain by pointedly neglecting to use a person’s name, such as the way he refers to his predecessor, not as Donald Trump, but “the former guy”.

A Biden condition of going along with AUKUS was that Morrison had given his word that he would inform Macron of what was happening and also ensure bipartisanship domestically by a timely consultation with alternative Prime Minister Albanese. By the time of the AUKUS announcement, Biden probably knew Morrison had done neither.

On many fronts, Morrison’s personal "character" flaws were flashing red lights and were an obvious election strategy. Yet, Fran Kelly was putting to Albanese in a scoffing tone weeks before an election that Morrison’s character was off-limits at a time when Liberal Party strategists knew his personal standing in the electorate was toxic.

Kelly was not alone among ABC presenters adopting Coalition talking points and it has continued beyond the Election. Reporting on a press conference held by incoming Treasurer Jim Chalmers, ABC political reporter Jane Norman noted:

“...thanks to the pandemic we are deep in the red.”

Norman’s setting of the scene is typical of some ABC journalists, who have seemingly absorbed a flawed LNP narrative and are repeating it for public consumption.

The facts are that in 2011, Labor Treasurer Wayne Swan left a national debt of $191 billion after spending during the Global Financial Crisis. By 2019, before the pandemic, profligate borrowing and spending under treasurers Joe Hockey, Scott Morrison and Josh Frydenberg had nearly tripled the national debt over a short period to $542 billion. Treasury forecasts have the debt due to hit $923 billion by June this year, and the pandemic played its part, but extravagant waste and incompetence were habitual before the pandemic.

Why Norman, Kelly and other ABC presenters appear captive to the former Coalition Government’s framing of the national narrative might simply be explained by an effective media strategy coming out of Morrison's office. That explanation is premised on journalists being conned when their core professional skillset includes being objective and exercising scepticism.

That said, Morrison was well known as an obsessive media manipulator before becoming Prime Minister. Annika Smethurst notes in her book that when Morrison was Treasurer, he preferred consulting with newspaper editors rather than Cabinet colleagues on policy issues and would often come to Cabinet with “mad ideas” after meetings with editors. Then, when his ideas were scotched in Cabinet, he would blame public servants for misleading him.

More conspiratorial speculation proposes a Murdoch infiltration of the national broadcaster, including recruits to the newsroom, stacking of the ABC board, and even the appointment of the managing director herself, Ita Buttrose.

Given a choice between a conspiracy and a stuff-up, my inclination is to lean towards the stuff-up, but the malaise does not appear to be going away quickly. Whether a more amenable government will cause the ABC to feel less threatened and cowed remains to be seen. But in the meantime, it’s losing the respect of a large part of its loyal audience.  How large a part is unclear, but if the malaise is not reversed, the ABC risks surrendering the audience's trust that has previously shielded it from influential forces that want the broadcaster privatised.

Conspiracists see that as the long-term end-game in which many of those who built trust in the ABC have been recruited to destroy it. What can’t be explained is how they might have been persuaded to sacrifice their precious reputations to contribute to that end.