SUBSCRIBE   DONATE LOGIN SHOP
SUBSCRIBE   DONATE
How we prevented a Morrison dictatorship
How Howard screwed the Libs
U.S. site tries to ruin what makes fairy bread great
Bloody Idiot of the Week — Episode 28: Get used to it
Morrison's 'politics of retribution'
Mining

The building of coal-fired power stations across much of the world is declining, but the trend is not enough to avert the risk of climate change reaching dangerous levels. Alex Kirby from Climate News Network reports.

A GLOBAL investigation into every coal-fired power plant proposed in the last five years shows that only one in three of them has actually been built.

Researchers say that for each new plant constructed somewhere in the world, two more have been shelved or cancelled. They say this rate is significantly higher in Europe, South Asia, Latin America and Africa. In India, since 2012 six plants have been cancelled for each one built.

Coal use has also shrunk significantly. In China it fell in 2014 for the first time for 14 years, while the economy grew by 7.3 per cent. From 2003 to 2014, the amount of coal-fired generating capacity retired in the U.S. and the E.U. exceeded new capacity by 22 per cent.

But it is more than simply a question of the number of plants being built (or not). The report says:

Against this, concentrations of planned new coal plants can still be found in Turkey, Vietnam, Indonesia, Poland, some Balkan countries and Japan. Germany is one country which continues to burn large quantities of coal, including lignite. And global coal consumption grew by 3 per cent in 2013, well below the 10-year average of 3.9 per cent, but still the fastest-growing fossil fuel.

Ted Nace of CoalSwarm, a network of researchers into coal's impacts and alternatives to it, said:

“What's striking is how quickly the business climate has turned against coal since 2012. Because these projects require large capital outlays, they're vulnerable to rising perceptions of risk.”

The report, Boom and Bust: Tracking The Global Coal Plant Pipeline, by the Sierra Club and CoalSwarm, details the findings of research into every proposed coal-fired power plant worldwide since 2010. The data in the report will be continuously updated on the Global Coal Plant Tracker website. 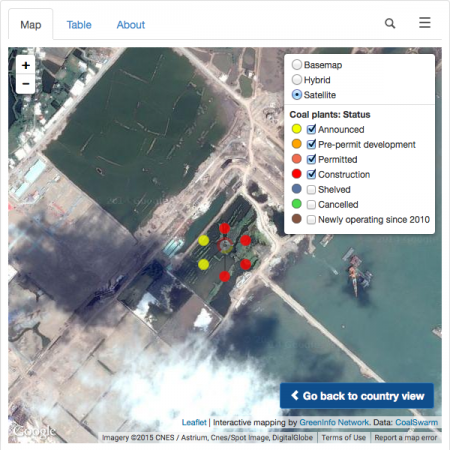 The report's findings suggest strongly that the market for coal is contracting, but the authors acknowledge that the trend will have to accelerate if the world is to avoid crossing the internationally agreed threshold which is thought able to prevent dangerous climate change.

The International Energy Agency is among those warning that, to keep global warming from rising beyond the agreed maximum of 2°C above pre-industrial levels, no more than one-third of proven reserves of fossil fuels can be burned before 2050.

A recent report from University College London found that, globally, to stay within 2°C, 82 per cent of coal reserves must be left underground, 49 per cent of gas and 33 per cent of oil reserves. Boom and Bust argues that, even if the trend of two coal plant proposals halted for every plant built continues, the remaining one-third will account for nearly all of the greenhouse gases that can be emitted before climate change crosses the 2°C threshold.

“Existing global coal-fired power plant capacity will already swallow four-fifths of the 2°C carbon budget over its lifetime, leaving no room for burning the world's oil and gas.

“This fundamental contradiction means investors must assess their exposure to coal plants that are most at risk of becoming stranded in a carbon-constrained world, and steer clear of funding any new coal plants altogether.” 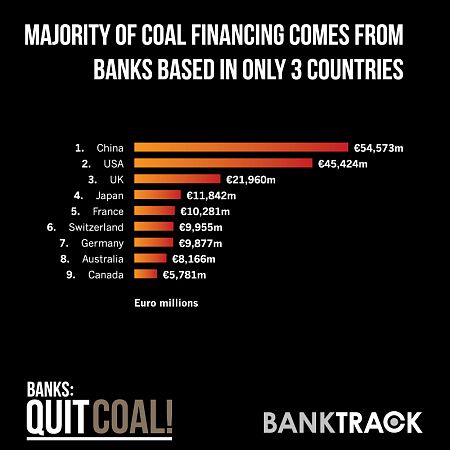 Analysis by Carbon Tracker has also identified major financial risks for investors in coal producers around the world, with $112 billion worth of investments in future coal mine expansion and development that will not be needed under lower demand forecasts.

The Sierra Club and CoalSwarm say that, as attention focuses on the U.N. climate negotiations in Paris in December, new and existing coal plants must be phased out, with OECD countries giving a lead. Countries should undertake to end subsidies and policies that favour coal and focus instead on clean energy.

The report says that not only is coal the most carbon-intensive way of generating electricity, but the fine-particle pollution it causes kills an estimated 800,000 people prematurely every year, with China thought to account for 670,000 of these deaths and India 80-115,000.