Nuclear industry infiltrates ABC to push for an atomic Australia

The nuclear industry is using increasingly subtle methods to promote the development of a nuclear power and radioactive waste disposal industry in Australia. Noel Wauchope reports. 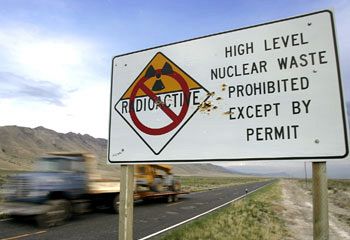 This program was remarkable for two reasons.

First, Mr Krieg appeared to be not your usual expert connected with the nuclear industry. Mr Krieg, we were told, is “a retired geography and geology teacher”. Good, I thought, as it seemed that the ABC was giving an ordinary mortal a go on national radio. But was that all he was? No, alas. There was, as there always seems to be, some “astroturfing” going on. A bit of research on the Net and we soon discover that Mr Krieg is a spokesperson for the Australian Nuclear Forum. This is an organisation dedicated, it says, to “advancing peaceful aspects of nuclear science and technology”. With that aim, the ANF provides “policy papers and information papers for schools”. Its members are “professionals with wide collective experience in nuclear science and technology”. In other words, it is a false grassroots nuclear industry lobby group.

Now, I really do think that the presenter, Robin Williams, should have told us that.  But perhaps he didn’t know. It is in the interests of nuclear astroturfers to not have people know that the information they present, far from being unvarnished, comes straight from the nuclear industry itself.

Secondly, Mr Krieg came out with what the nuclear lobby has been secretly planning for Australia — that is, to establish the full nuclear cycle in this country, including storing radioactive wastes.

For these two reasons, Krieg’s promotional spruik is important.

I hope that it kicks off a clearer, more “democratic’ discussion on the nuclear industry.  Australia so far has had only one real speaker who puts clearly the case against nuclear power: Dr Helen Caldicott. Yes, I know that she is an “expert”. But she has an unusual ability to speak plainly. Perhaps that is why she is ignored by Australia’s media and political big boys.

Anyway, Australia surely needs some plain speaking on this issue, so critical for our children and grandchildren’s future.

Terry Krieg should not be ignored. His vision for a totally nuclear South Australia is scary stuff.


On Climate Change and Renewable Energy

Krieg, rather surprisingly, loses some scientific credibility right at the start, as he reveals himself as a climate-change denier. He moves on to state that pursuing renewable energy is unwise, saying that USA energy experts in the ’80s have been proved right in writing off solar energy.

Krieg emphasises the small proportion of energy consumption from solar and wind, and doesn’t mention the statistics from other sources, such as hydro-power. And, there is more to the solar and wind story, as they are new and fast developing industries, both in centralised and in small distributed forms.

“About 16% of global final energy consumption comes from renewables. Wind power is growing at the rate of 30% annually, with a worldwide installed capacity of 198 gigawatts (GW) in 2010,[3][4] and is widely used in Europe, Asia, and the United States. As of 2011, small solar PV systems provide electricity to a few million households, and micro-hydro configured into mini-grids serves many more.”

From the Melbourne University ‘Renewable Energy Technology Cost Review’ (May 2011):

“The installed capacity of photovoltaic has grown at rate of 40% over the last decade.  As the industry has grown PV module prices declined along a well-established learning curve, which has seen cost reductions of 22% for each doubling of cumulative capacity, over the last few decades…The International Energy Agency (IEA) and the EPIA expect further cost reduction with increased production capacities, improved supply chains and economies of scale”

Krieg limits himself to brushing this off, dismissing Germany as closing down its nuclear reactors “in a state of panic”, which is less than persuasive.

Krieg dismisses any problem of radiation from Fukushima:

“There have been no deaths from radiation poisoning. And when the dust of radiation has settled and safety and reactor protection measures have been reviewed and strengthened, the nuclear industry will resume the rapid building program currently in place and especially in China and India.”

Really? This is a very worrying statement. Cancers from low level radiation would not be expected to appear, on average, until 25 years after irradiation. He doesn’t mention the estimated million deaths from Chernobyl.

What does he mean by “when the dust of radiation has settled”? I fear that this is a metaphorical statement, by which he really means “when the nuclear lobby has convinced the population that radiation is not harmful”.

And, incidentally, the rapid nuclear reactor building is not “currently in place” anywhere, not even in China or India— the former having slowed their program, and the latter now bogged down in political problems.

This seems to be Terry Krieg’s main target, no doubt because wind power is going rather well in South Australia. He points out the cuts in wind power turbine production in Denmark. He doesn’t mention that Denmark lost these sales, as UK has decided to buy their turbines from rival manufacturers GE, Siemens and Gamesa.

It is true that Denmark is now stalling its wind farm development program, but this has more to do with its need to develop a smart grid that can make full use of the wind energy, most of which is now exported. With a new consortium of companies, iPower, Denmark expects wind power to supply 50 per cent of its electricity by 2025.


Krieg ignores the continuing development of new wind and solar technologies.  For example, the Japanese “wind lens” (see picture opposite):

Krieg does try and dazzle us with a bit of science about “load” and “capacity” of wind power. But this boils down to something that we all knew anyway — that wind does not blow all the time in one area, so there is not “base load” power all the time. Ways have been devised to deal with this — from smart grids, co-operating wind farms, over wide areas, networks of grids, connections with other sources of energy, and from changes in energy use, to reduce peak demands

Krieg points out the cutbacks to renewable energy projects in European countries: the USA and Canada. This is a complex problem — and not at all simple as Krieg makes it sound. As for producing solar and wind technologies, China is now doing this so cheaply that the USA, for one, is importing Chinese technology for renewable projects, rather than making it. With the global financial problem, governments are cutting back in many areas. Renewable energy does indeed have considerable upfront costs. But it is hardly fair to compare this with other energy sources, since the fuel for renewable energy is free, so therefore the ongoing costs are negligible. Pricing mechanisms would obviously be coordinated to address this.

He claims that nuclear power is “emission free”.  Yes, emission-free if only you don’t count the nuclear fuel cycle’s “front end” uranium mining, milling, transport and its “back end”— wastes storage and disposal, including the finished reactor itself. And, to reiterate, there is no known way to safely store deadly nuclear waste, an unavoidable by-product of the nuclear process that is poisonous for an eternity.

Krieg then enthuses about how nuclear power alone can meet Australia’s energy needs “at the scale required”. Presumably, he means at a huge scale.

I am not surprised that he ignores the movement for energy efficiency and energy conservation. The nuclear industry is dedicated to the principle of endless growth in energy consumption. He paints a glowing picture of the worldwide growth in nuclear power plant building.

“Clearly, the world is going increasingly nuclear. Australia should be part of that rapid worldwide nuclear increase.”

But it is not clear at all, as even the nuclear industry admits. Rob Atkinson, Australian Uranium Industry Chairman stated recently:

Krieg finishes up with a swipe at the Australian Greens and the other political parties. Amazingly, Krieg states that more “Greens around the world are calling for nuclear power”.

Now, where on earth did he get that from?

Last of all comes the really scary bit:

“Australia should now position itself to benefit to a much greater degree from its massive uranium resources through active participation in the rapidly expanding nuclear fuel cycle industry. We should not forego the opportunities it offers and simply remain a supplier of the basic raw material for this very important global industry."

A veritable cornucopia of riches will open up for South Australia, he says:

“South Australia has juxtaposed in our north-west desert the biggest uranium deposit and the best nuclear waste disposal site on the planet”.

Krieg has spelled out what Australia’s nuclear mandarins have been quietly planning for some time, as has been reported in this journal. Not a word, not a worry, about environmental impacts, water supply and water contamination, costs of security and permanent waste disposal, risks of terrorism. It is no mere pipedream. Australia is signed up to the International Framework for Nuclear Energy Co-operation, which includes the provision that uranium sellers would take back nuclear wastes. China has indicated that purchase of uranium might be dependent on the return of nuclear wastes to the selling country.

If the Australian public is not made aware of the full meaning of the nuclear lobby's plan, in clear "ordinary" language, Terry Krieg's vision might well come true.