News Corp teeters on the edge

Another secretly recorded meeting at the UK offices of News Corporation shows an organisation in chaos, teetering on the edge of insolvency. 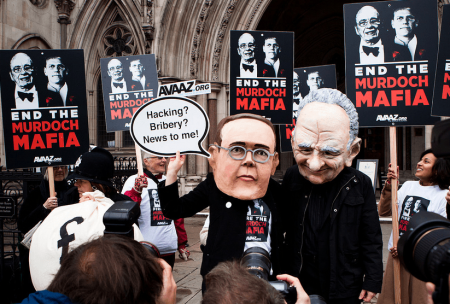 ANOTHER SECRETLY RECORDED STAFF MEETING at News UK has revealed that Rupert Murdoch’s British operations are close to bankruptcy and their future is dependent on the outcome of the current London trials.

A former head of the British publishing arm, New Zealand-born Tom Mockridge, told the staff  late last year that the costs associated with the trials will be at least double the half-million pounds cost that the corporation told its shareholders at its recent general meeting in the United States.

The new figure would leave its British arm insolvent. Its British newspapers would have to be sold. In the past, they had been highly profitable,  most of all The News of the World, which had been the company’s richest asset until Murdoch closed it down.

Mockridge had replaced Rebekah Brooks (now on trial) as chief executive of News UK. He bluntly told his London staff:

“If this company was not still a subsidiary of News Corporation, it would be bankrupt right now.”

Mockridge had called the staff of News UK to a one-hour meeting in the boardroom on the 13th floor of its London headquarters, where he laid the company’s cards on the table, admitting that the company had co-operated too closely with the police investigation.

“It wasn’t my decision,” he said. “If I had hindsight I would have told the police to bring a search warrant, but I was too bloody late.”

He blamed the company’s army of lawyers: “There were too many and they were all bastards.”

After the meeting, Mockridge tendered his resignation.

What he said throws a new light on the desperation with which Murdoch brutally assaulted the Australian Labor Party in the lead-up to this year’s September 7 election. Murdoch is clearly using his power in Australia to resurrect the prestige he has lost in England.

The astounding headlines that marked the whole election campaign – 'KICK THIS MOB OUT', 'KEVIN’S DEADLY SINS', 'SEND IN THE CLOWNS', ;DOES THIS GUY EVER SHUT UP' –  inevitably handed a shallow victory to Tony Abbott and his motley team of money and power grabbers.

Australians are already regretting the result of the election that put Abbott and Co. into Murdoch’s pocket. The U.S. based Fox News-Tea Party  magnate will call the shots as long as the Abbott era is allowed to last.

With his newspapers covering every Australian state and prepared to lie on every current issue,  Murdoch is in a position to demonise any opposition and any individual. He has even been able to influence the ABC national TV and radio services as well as the shock jock commercial broadcasters.

The November issue of the national The Monthly magazine is one of the few outlets that describes Murdoch’s blitzkrieg in an article headlined 'Why Rupert Murdoch cannot be stopped'.

The power that one man can exercise over the country of his birth, while facing criminal charges in England and serious investigations into his corporate activities in America, leaves Australians under a virtual dictatorship.

But Murdoch is small fry in America compared to his iron control of what Australians are allowed to read and hear today.

Earlier this year, Murdoch, under pressure from his New York based senior executives, his legal advisers and his shareholders, broke his company into separate divisions — one for newspapers and the other for entertainment and TV.

At this year’s shareholder meeting, he was allowed to remain chief executive, but only by a small margin of votes — he could be said to be on probation pending the outcome of the London criminal trials.

Shareholders were told that the company could not predict the ultimate outcome or costs of civil claims or criminal activities, but legal and professional fees would amount to an estimated $US200 million and possible financial liabilities resulting from the criminal trials would add a further $US400 million. Mockridge's comments suggest these figures are far from accurate.

Whatever money has to be paid would have to come from the profits of 21st Century Fox.

Murdoch’s Australian invasion is a clear message that he is ruthlessly prepared to gamble everything he has on reinstalling himself, if not as a world figure anymore, at least as a dominant figure here.

Pride is everything to him and he is determined not to fall into obscurity.