Tess Lawrence is committed to keeping an open and transparent covenant with our readers in exposing the corrupt activities of the National Australia Bank, McKean Park and the 'phantom' Bankruptcy Trustee and Receivers. Today, at 1pm, her beloved historic Islay House – centrepiece of Woodend – is illegally being auctioned. Lawrence has quite erroneously been described as the ‘former' owner, given that the property is still under legal contest.


Nothing could be further from the truth, given that in the Court of Appeal, their Honours Kyrou and Nettle adjourned the case sine die so Tess could seek to have the bankruptcy order annulled in the Federal Court and is still awaiting transcripts — and, indeed, only recently received a copy of a delayed Judgement from the Federal Court.

Lawrence was not informed of this underhanded and, she asserts, illegal, attempt to sell Islay House from under her. Yesterday, she sent this Demand to the Group Chief Executive Officer of the National Australia Bank, Cameron Clyne, and Antony Cant, the bankruptcy trustee who has not once contacted Ms Lawrence.

(Read more about Tess Lawrence's struggle against the NAB and the Victorian Injustice System.) 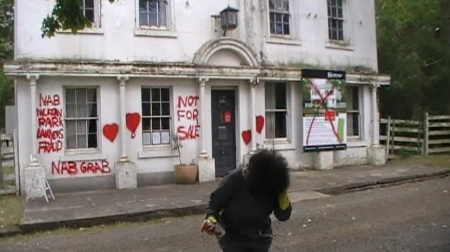 1. In the above court cases Antony Cant (Trustee) and the National Australia Bank, incorrect evidence of debt has been used. This incorrect debt has been presented to the court for decisions in bankruptcy in the Federal Court, the Supreme Court of Victoria the Court of Appeal. I hereby demand you immediately cease all actions with my property and remit forthwith a proper accounting of my debt, not as alleged by you and the bankruptcy trustee (Freeman versus National Australia Bank [2006 QCA 329] (1st September 2006) at [37] [38] [39] and [43]). And further, I demand that you return all documents and personal papers and personal possessions.

2. It is alleged that your bank has voided Section 51A and Section 52 of the Trade Practices Act 1974.

3. These actions are an abuse of process in that the true facts have been admitted to be incorrect but your legal representatives did not present those facts to the court, against the self-litigant, even though they were aware that evidence supporting my cases was not presented to the court.

4. All parties mentioned above were aware that McKean Park has falsified the account in bankruptcy by virtue of the fact of my presentations and McKean Park's admissions.

6. By virtue of these facts:


a. The Code of Banking Practice at Section 3.

b. Honesty and fairness in banking operations are required and identified under that contract. The contract applies to myself and NAB and the implementation of the NAB debt by the bankruptcy trustee

c. Pursuant to the Bankruptcy Act 1966 (Cth) at Section 60 (2) arbitration is the process to remedy.

d. This contract was confirmed by the National Australia Bank by its adoption of the Code of Banking process 2004.

7. Pursuant to the Victorian Arbitration Act you could have fulfilled your obligations to continue in the court an action requiring a settlement process under the Federal Court rules 2011.

8. This has never been attempted.

9. You are now proceeding to sell unlawfully obtained property pursuant to the orders of the Victorian Supreme Court, unlawfully supported by incorrect evidence presented to that court.

10. Pursuant to a verbal agreement before June 2009 between Charles Trkulja and myself, the NAB agreed to forego all and any interest on any of my accounts and such interest would not be resumed until I was satisfied of the justice in the NAB's claims.

11. This agreement not to charge interest until I was satisfied with the justice of the NAB's claims is a fundamental intent in writing in the Code of Banking Practice.

12. This is misleading and deceptive conduct practised by NAB in charging interest against my account.

13. Pursuant to what the NAB claims to be an original contract, interest was debited to an account held for that purpose, NAB has not carried out these conditions.

14. NAB has not presented the original contract with my notations to the Court. This is a serious offence of Section 55 of the Commonwealth Evidence Act, the Crimes Act Section and the Commonwealth Criminal Code pursuant to corporate culture provisions and making incorrect statements to a Commonwealth body.

15. Subject to all of these and other incorrect facts presented to the court in bankruptcy and the Supreme Court of Victoria in actions brought by NAB against myself, I demand compensation and damages and the setting aside of the mortgages as sworn in my Amended Defence and Amended Counter Claim, including the deposit paid on 8 Leggatt St, Daylesford and the balance loss and income potential loss of the property. And further, I claim interest on that quantum of compensation since NAB made misrepresentations to myself on December 20, 2006 at NAB's office at 330 Collins St.

16. This circumstance has not been investigated by any Court at any time because NAB has intentionally withheld the true completed Contract in writing from the courts.

17. I hereby demand those documents not provided, including the contract, the written down values of the properties, and all bank statements, further and that you hereby immediately cease and issue immediate instructions to receivers and agents and representatives to withdraw all sales and instructions pursuant to the hearing situations.

19. I have complained about this failure in proper pursuit of fairness and credible behaviour by legal practitioners in dealing with self-litigants as defined in the legal practitioner’s rules in the commonwealth and State best practice guidelines and within the principal of James La Ferla versus Birdon Sands Pty Ltd [1998] NTCT 83 Mildren J.

20. Pursuant to the APPRA Guidelines, the NAB can reinstate my account and reduce my security and quantum of debt in order to allow a reinstatement of my account.

21. Subject to the above, I demand NAB and the bankruptcy trustee appropriate adequate funds to support my claims. So that orders already made may be withdrawn or varied.

22. I hereby demand all judgements be withdrawn and that an annulment of my bankruptcy be supported by both the bankruptcy trustee and the National Australia Bank.

23. Pursuant to evidence that the sworn Affidavit of Service on the Originating Writ documents a false conversation with me, on a false date and a false time, I demand that the National Australia Bank's Writ be voided. Further that the NAB engaged in fraudulent and corrupt activities.

24. Further, that the NAB, the Receivers, McKean Park and the bankruptcy trustee issued false notices on my property and possessions claiming that they were abandoned.

25. That the above failed to post legal and proper notices on my property and possessions.

26. That the above failed to notify Woodend Real Estate Agent John Keating that property was the subject of legal contest.

27. That the above failed to notify me of any sales or destruction and damage and removal and theft of my possessions.

28. That the National Australia Bank, McKean Park, the Bankruptcy Trustee, the Receivers and all agents and representatives acting on behalf of the above were aware of a shocking video filmed by film director Matt Norman and placed on Youtube depicting the damage and desecration and theft of my possessions and yet did nothing to mitigate the circumstances, despite the NAB posting a comment on YouTube.

29. That Adam Segal for the NAB deceived the Courts on several occasion by stating he was unaware of the status of the Bankruptcy matter/Order, when he himself has represented the NAB and attended Court on behalf of the NAB in this matter.

30. That the NAB deceived the Courts by not telling the Courts that the Bankruptcy Order had been made on November 11, 2012.

32. Before their Honours Kyrou and Nettle in the Court of Appeal, Mr Segal did not deny my attesting to this fact.

34. The Bankruptcy Trustee did not serve me with any documents at all, until the hearing before Justice Jessup on January 31st - astonishingly three months after the Bankruptcy Order was made.

36. The NAB had admitted that it further redacted the Court Book for AJ Gardiner and this redaction has not been examined, despite requests.

* Please find enclosed a demand to investigate, provide evidence, provide facts, and to withdraw judgements in litigation involving the above parties.  Please consider this demand in light of the incorrect court processes that can be identified against you and other parties.