While Rupert Murdoch works to expand his global media empire, news emerges of the collapse of his chain of Australian newspapers, writes Rodney E. Lever.

Rupert Murdoch has bigger fish to fry than his piddling collection of broken down newspapers that circle the Australian continent. Ambition has him by the throat now and he cannot help himself. Only his own death will stop him. He is enough of a realist to see that, but is too possessed by his own ego.

His ambition now is levelled at monopolising world television and he is joined in a partnership with John Malone — an Irish-American magnate and pioneer of now defunct rental videos stores, who became chief executive of a big cable and media company and then head of his own Liberty Media, a satellite television service with a wide coverage.

There was a time when Malone might have taken over Murdoch’s company.

Malone accumulated a holding of News Corporation shares in 2005 that gave him about 32 per cent of the company, becoming its largest shareholder, although only about half those shares had voting rights. Murdoch used what is known as the 'poison pill' strategy to oust Malone and protect the company from a hostile takeover.

For several months, it was like a game of chess. Then, checkmate! Malone returned his voting shares in return for other assets that Rupert was prepared to swap.

Malone and Murdoch were fierce rivals but they respect each other’s business acumen. They are working together again now to create a virtual world monopoly of television, with sports, and movie production and Murdoch-style political propaganda.

News? Some might call it news, but Murdoch’s concept of news is riddled with scandals, character assassination and narcissistic elements in which can demonstrate his power.

Neither lack of appetite nor excessive caution has ever hindered Rupert Murdoch. It is hard not to link him with his maternal grandfather, who was a notorious and largely unsuccessful gambler, well described in a biography of Rupert’s mother.

Rupert built his Australian newspaper empire in the period 1950-60 and then, bored by Australia, he turned towards England, where he had earlier managed to waste four years of university, including several trips to the gambling casinos in the Riviera, where he performed as badly as his grandfather.

In 1969, Murdoch bought the News of the World and then even more newspapers, to claim a third of all daily readers in the United Kingdom.

Next, he jumped the Atlantic to acquire the New York Post, plus New York magazine, TV Guide, and Harper Collins, the book publisher.  Murdoch now had influence on three continents. He reached out even further for TV stations and the Twentieth Century Fox Studios and launched the Fox Broadcast Network and satellite networks and built a platform that would sweep across Europe, China, and South America.

In the meantime, he managed three weddings and three unpleasant divorces.

He has never satisfied his obsessions to own things and to gain more power. The philosophy of capitalism is simple if you devote your life to it.

“The game is monopoly. You need to control everything. You need to be like Rockefeller, the oil fields, the filling stations, the pipelines and the trucks to get the fuel to the stations. They broke Rockefeller. The game’s over when they break you up. You know you’ve won when the government stops you.”

The business of business is business!

With John Malone, Rupert has a friend he admires almost as an equal.

Because in their rivalry to become the biggest in the world, each of the 15 major monopolies has overspent — buying every asset they believed could outbid and outdo their rivals.

The magnitude of this seemingly unlimited spending spree is simply a revelation of how desperate men like Rupert Murdoch and his rivals in America throw money away simply because that have too much already and want more.

From a leaked document, Crikey brought to public attention the huge losses Murdoch’s newspapers have suffered in Australia.

There is much that Murdoch could have done to try to save his papers, his employees and his readers and to improve the quality of their reporting.

The trouble within News Corp Australia is that Rupert Murdoch’s overseas preoccupation exceeds the ability of his local management to improve their products. Orders to reduce staff saw the quality of reporting become messy, unreliable and nerves became raw. Murdoch’s wishes came through mainly in his weird tweets on Twitter. He became an occasional fly in fly out visitor. His editors had to rely on guesswork. Rupert’s contempt for the English is exceeded only by his contempt for Australia.

In America, he is faced with far bigger issues.

Digital technology has undermined everything the U.S. media had used for a generation. About 1,000 companies there have turned into only five separate and fairly equally powerful magnates competing with Murdoch in digital strategies. Some of them still use outmoded business models that no longer function properly. Some executives cannot come to terms with the new technologies.

Murdoch and Malone have an advantage. Their playmates, or rivals, include one American who has been wedged at the top of the U.S. entertainment far longer than anybody else in history.

Sumner Redstone, who is 90 years old, and head of Viacom and CBS, refuses to retire because:

Jean-Marie Messier, age 57, was running the giant French internet company Vivendi until he drove it to the edge of bankruptcy. Now wants to play with the big guys in America and is looking for a business to buy for himself.

Brian Roberts, 56, is the head of Comcast Corporation, a U.S. communications company that owns cable and entertainment outlets.

Michael Eisner, 62, was head of the Disney Corporation for 20 years and left to pursue a new career as a movie and TV producer.

This is not a mafia mob. There are no guns under the table. Widely different personalities, they are friendly when they meet, usually about once a year.

With John Malone, who is 73, at his side, and with their joint world of experience, the 84-year old Rupert Murdoch has a strong chance of outwitting the four rivals, unless they join forces, which seems unlikely.

The question: why the hell is Murdoch not back in Australia trying to rescue his Australian newspapers? They are bleeding money and losing more readers every day.

A thing I noticed about the young Rupert when I worked for him very many years ago — he really didn’t know much about newspapers then. He picked up ideas from other people and used them as his own. Perhaps that’s why he can’t repair his Australian newspapers.

Because he doesn’t know how. 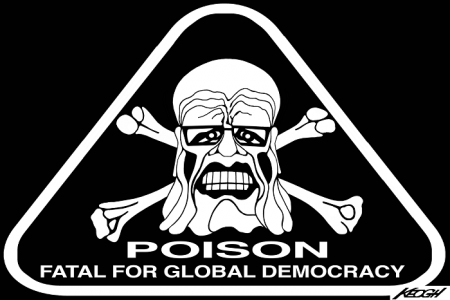