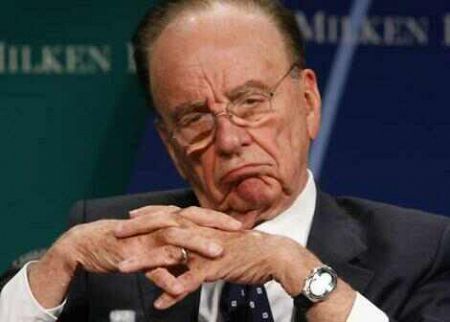 IF RUPERT MURDOCH is prone to nightmares, he must surely be tossing and turning in his bed?

The covert recording, now circulated to the world, made by his own editorial staff in their meeting with News International chiefs, including Rupert Murdoch, contains references to what is called the 1906 Misconduct in Public Service Act.

A reporter from the Sun told Murdoch:

“The first time I heard about the 1906 Misconduct Act was when I was arrested.”

“The first time I heard about it was a couple of weeks ago. But go on!”

“So, completely oblivious to the fact that the long term practice of this company to pay public officials was illegal, my job description meant that”... [this part of his statement has been erased from the transcript for legal reasons)]...“we are effectively being made scapegoats.”

“Yeah! And one of these high priced lawyers would say it is your fault....”

What is called the "Misconduct Act” among the staff of Murdoch newspapers is legislation that is described as “An Act for the better Prevention of Corruption”.

It is part of a series of British, Irish and Scottish corruption acts passed between 1889 and 1916.

Offences under these acts by an agent or any other person acting for an agent are subject to imprisonment of up to seven years.

An “agent” is defined as any person, or one employed or acting for another, including a principal or a person acting for the government. A “principal” includes an employer.

While the legal language can be confusing, the intention of the Act is clear.

Any person conniving with police or public servants as a favour for providing information is likely to be in deep trouble.

For a newspaper magnate like Murdoch, the Act is a bombshell waiting to explode.

To suggest that individual reporters pay for information from their own pockets would be an impossible defence.

Reporters would need to claim such money from their employer as an expense. They would also have to justify the reason for such expenses.

Murdoch’s claim that every newspaper does it will not suffice as a legal defence.

Should this go to court, the alleged actions of other newspapers will be irrelevant.

One journalist asked him:

“You used the phrase, 'things were done on The Sun for over 40 years'. The working practices here are ones I inherited not ones I instigated.”

“We’re talking about payments for news tips from cops. That’s been going on for a hundred years.  I would have thought one hundred per cent, at least ninety per cent, were made at the instigation of the cops, saying “I’ve got a good story here. It’s worth 500 quid.”

Sorry Rupert, but even 10 per cent or 1 per cent of such a payment could be held as corrupt.

It must have been an issue over a century ago in Britain for the laws to have been written.

Whoever is proved to have paid the money does the time. The Act says so.

In all my years in the Australian media, I have never been aware of payments by newspapers for information. Magazines and TV stations occasionally pay for exclusive interviews and photographs.

Payment for news tips seems to be largely a British disease and it mostly involves the shabbier tabloids. The competition for scandal is fierce among the tabloids.

In the Australian media, phone taps have never been used. Nor have reporters ever dressed as Arab sheiks.

In the kind of journalism in which I was involved, there was never any significant payments to sources and contacts. A schooner of beer? Occasionally. A free lunch? Perhaps?

Rupert Murdoch has been sucked into an abhorrent system.

His mother and father, if they were alive today, would be horrified by his actions.

His children will feel the shame.

He had never heard of the Misconduct Act!?

The price for such delinquent irresponsibility may be very high.