Looking for the real story behind high home prices

The inquiry’s final report contains 40 recommendations, but few if any of these will have a positive effect.

The report recommends improving capacity to pay by phasing out stamp duty on home purchases, reducing the impact of infrastructure charges on the price of new housing, better targeting of the First Home Owners’ Grant, and reviewing the impact of investor tax rules on housing affordability.

This familar story, unfortunately, glosses over some important evidence. I believe there is another story to be told, one about developers drip-feeding the market to keep prices up, and where capital gains created by the community are mostly retained by individual owners. It's a story that goes something like this:

A shortage of supply is commonly blamed for high prices. However, housing is not a homogenous product. Buyers are choosy about housing type, features and (particularly) location. More importantly, the housing market is not truly competitive because private developers have a considerable influence on supply (see also here and here).

Consequently, the usual rules of supply and demand do not necessarily apply. Even with more government land releases, developers largely control what is brought to market to keep prices high. This is unsurprising but rarely acknowledged.

Governments do not directly increase supply as was done in the past, but there are several ways governments could influence the price buyers are prepared to pay.

'Golden decade': There are no #housing bubbles in sight, says one of Australia's biggest developers. http://t.co/xM2jWICCH7 Hmm...

2.   Housing costs what buyers are prepared to pay

In the current situation with supply largely controlled, the price of housing is ‘demand determined’. Even if supply were increased, it is far from clear that this in itself would reduce prices much.

The Reserve Bank has acknowledged that higher home prices are mainly due to lower interest rates and the resulting greater purchasing power. As well, investors have incentives to pay more than owner-occupiers because of negative gearing and a discount on capital gains tax.

The inquiry report put little emphasis on the expectation of future capital gains as a driver of higher prices.

While an investment property often makes a loss for a number of years, the buyer expects the initial loss (tax deductible through negative gearing) will be offset by capital gains.

The attraction of future capital gains has been even greater since a 50 per cent discount was applied to capital gains tax in 1999.

Banks and other finance providers are now “eager to lend to households” for property investment. Interest only and low equity loans have been readily available, with the family home as collateral.

The number of property investors has grown substantially over the last five years. See graph below: 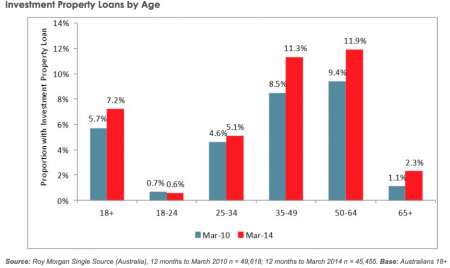 Negative gearing is not stimulating much new housing construction, with more than 90 per cent of residential investment mortgages being for established housing.

Economist Saul Eslake notes that few other developed economies have negative gearing but most have ‘higher rental vacancy rates’ than Australia.

To put it starkly, home prices need to fall — relative to incomes initially, and then in absolute terms over time. Because developers largely control supply, reforms are needed to reduce the price buyers are prepared to pay.

At the heart of the issue is this question:

Who is entitled to the increases in land value created by general expansion and development of town and cities?

The existing capital gains tax recoups some of these land value increases. This tax needs to levied at a relatively high flat rate on the inflation-adjusted increase in the unimproved capital value of the land.

Owner-occupied housing also benefits from unearned increments, and should be subject to a flat-rate capital gains tax, although the rate could be lower than for investment housing.

Negative gearing on established homes should be removed for reasons set out here and here.

The lending practices of mortgage financiers would also need more regulation, for example by limiting loan to valuation ratios.

These reforms should be “grandfathered” and/or phased in over an extended period, probably after the current overheated conditions moderate.

In this way the current imbalance between those wanting the security of home ownership and those seeking easy capital gains would be corrected.

You can read more about Brian Feeney’s research on this issue here.

20 September 2020, 1:00pm There is a more fundamental threat to life than the current pandemic and it enco ...