Justice for the few

Two incidents in the Victorian Court of Appeal yesterday have raised grave concerns about the independence and integrity of the Victorian court system. Contributing editor-at-large Tess Lawrence reports.

THE NAB, THE JUDGE & KEVIN PRINGLE VS MATT NORMAN AND THE PEOPLE

The sooner that Court sessions are televised, the better — for the protection of we, the people.

Two extraordinary events took place inside Practice Court No 10 of the Victorian (Supreme) Court of Appeal yesterday that reflected the insidious power and influence of the National Australia Bank over Court staff, and what can only be described as outrageous defamatory imputations and questions put to self-representing litigant Matt Norman by his Honour Judge Judd.

Both events were shameless and shameful examples of the bullying and intimidation the Courts repeatedly direct towards self-represented litigants. There is little doubt that neither incident would have taken place had Mr Norman been a lawyer.

One does not need to have a law degree to know that what happened to Matt Norman and his co-defendant and wife had nothing to do with Justice, but everything to do with perverting the course of Justice by threatening and thereby destabilising the Normans in their appeal pleadings.

[Read why Matt Norman was in court by clicking here.]

Matt described what happened in his own words on his day afternoon.The following is an excerpt:

"The Lawyers acting for NATIONAL AUSTRALIA BANK, Mr Kevin Pringle of GADENS LAWYERS in Sydney sent a burly thug to threaten Matt and Wife Rebecca before his Honour Judge Judd entered the Supreme Court today. What made this so much more of a mistake was he did it in front of a PACKED court Audience who were all there watching proceedings. I should mention that all those who came to my appeal party were absolutely no threat to the court and who remained professional throughout the hearing.

GRAEME SPURR – I am an associate of Kevin Pringle (to my wife Rebecca) I have had recent discussions with Kevin Pringle this morning and wanted to deliver my business card to inform you that I am here at his request.

GRAEME SPURR – No, he’s in Sydney. He asked that I pass on this message to you.

At this time GRAEME SPURR (Manager Facilities, Security and Contracts) Supreme Court of Victoria threw down his card on the table in front of me and one to my wife.

GRAEME SPURR – I want you to take a very hard look at this card….

Using his Pen, he leaned over my wife and I (I was sitting at the Bench going through the case and my wife was next to me) and said: 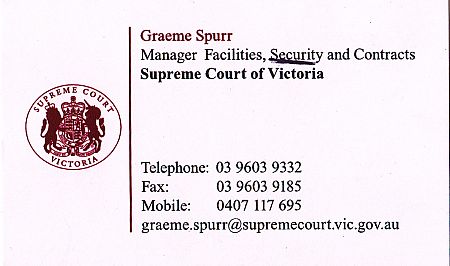 The card, with "Security" clearly underlined, that a court officer used to send a message to Matt Norman, apparently from the NAB, Matt's opponents in the case.

MATT – Fuck off idiot, are you serious?!

As soon as Judge Judd came into the court and proceedings started I stood up and told the Court what had just happened. Spurr just sat there looking like an idiot. Nothing was done about it. I should say this gorilla did this right in front of “The Age Newspaper reporter Chris Vedeiago” and a packed court both on ground level and in the top wings. I consider this a direct threat from National Australia Bank personally.

The Honourable Judge Judd then said:

Fiddling around through papers he started making a speech (quite rightly) about getting personal messages of threats or against the courts etc, etc… (exact wording will be in the transcripts I’ll get printed later).

Judge Judd then handed two pieces of paper to me:

JUDGE JUDD – Did you write this Mr Norman?

MATT – I’ll need to read it first your honour.

[After reading this letter.]

MATT – ABSOLUTELY NOT!!! Your honour, I wouldn’t ever write something like this to a judge of the court and furthermore this is not how I write.

JUDGE JUDD – So you would swear in testimony that this is not yours, Mr Norman.

MATT – Of course, I have never seen this before … EVER!

JUDGE JUDD – You said you’ve never even seen this before…

MATT – I have NEVER EVER seen this your honour

JUDGE JUDD – Are you willing to swear under oath to that.

MATT – Of course. I have never seen this before, I didn’t write this and would never write this to a Judge. 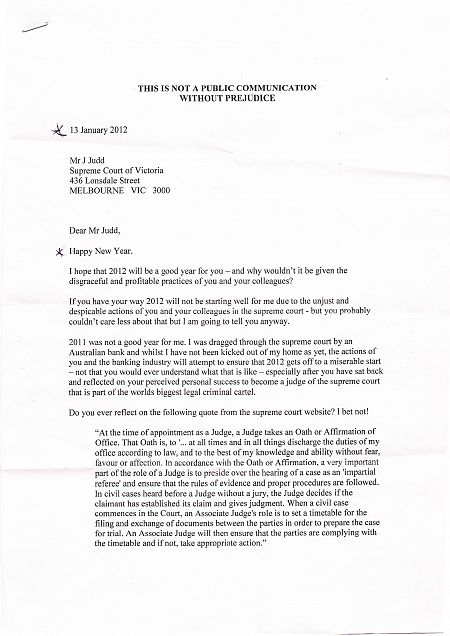 To View the letter please click here for page one

To View the letter please click here for page two

Now that you’ve read it and can see the disrespect shown to the Court, you can obviously see the concern. I believe without any doubt that someone working with the NAB, who have been viewing this site hundreds of times, sent this to the court to attempt to assassinate my Character for this case.”

(You can read the rest of this post here.)

What's wrong with this picture? Everything.

These two incidents had happened before I got to the Court, but I could tell from Norman's demeanour that something was troubling this former Commando. It was writ large in his body language.

That night, in response to Matt's posting, I left this comment:

Dear MATT NORMAN, I cannot countenance the audacity and disrespect for a self-represented litigant such as yourself by the National Australia Bank, their beleaguered lawyers Gadens, the Supreme Court’s Security Chief and NAB buffoon, Mr Spurr -- and His Honour Judd, whose defamatory outburst and accusal of you, spawns serious concerns about his own grasp of the fundamental tenet of the presumption of innocence. That only one of the parties before him should have been questioned about the document he produced, is outrageous.

At the very least, this State and the Attorney General who presides over a clearly feral and dysfunctional judicial system, owes you a Royal Commission into what happened to you and your family today -- and for the NAB’s fraudulent and corrupt action against you, to be set aside.

How dare he treat Matt and Rebecca Norman as if they were thugs and criminals?

How is it that Justice Judd, within minutes of Spurr's intimidatory conduct towards the Normans, then proceeds to question Matt Norman about an alleged letter addressed to the Judge?

No less than four consecutive times did His Honour press Matt Norman about the letter. Norman told me later of the duress and shock he experienced at His Honour's unexpected attack and the accumulative impact of Spurr's frightening message from the NAB's Kevin Pringle.

Time and again, in our separate legal fights against the NAB and a judicial system that is partisan to the NAB, Matt Norman and I have faced criminal acts, including death threats, against us.

As self-representing litigants who are both under financial hardship, we are vulnerable to such attacks — and, if we try to report them, we have received nothing more than utter contempt by the Court, as on May 9, 2011 when I tried to report death threats made to me in person just outside the Courtroom, by lawyer Richard Ashley, of McKean Park.

Here’s what happened, as I testified in a sworn Affidavit:

‘….The Magistrate, Mr Braun, hearing the matter asked the solicitor appearing for McKean and Park, Richard Ashley, to request Tony Rogers (the senior partner) to attend the Court. The matter was then adjourned to seek Mr Rogers’ attendance. Outside the Court Richard Ashley verbally attacked me and abused me for causing the attendance of Mr Rogers. His language was intemperate and threatening with words to the effect “You’re dead” and “you fucking bitch”. “The NAB and I will take you down”. “You will have nothing, you will be destroyed”. He pointed at me when saying these things and I thought he was going to strike me. I felt incredibly intimidated and I did not leave the court premises during the adjournment. I vomited in the ladies’ toilet.

‘7. I was helped by the Court Network person. She gave me access to a telephone and I called a lawyer, Mr Ross Delahunty, to seek advice. He advised me to raise the matter immediately with the Magistrate after the Court resumed. I subsequently did this, but the Magistrate said he did not want to hear what happened outside the Court.’

(You can read about the full account in ‘The Victorian Injustice System’ by clicking here.)

Magistrate Braun also showed he wasn’t much concerned by what went on inside his court either, when he told me that if he were to grant me an application for a re-hearing, it would open the floodgates to self-representing litigants.

Thus, the Magistrate clearly signalled he would not – and did not – judge my case on its merits, but rather, because I represented the hordes of the Great Unwashed and was not a hallowed lawyer, I was unworthy of Justice.

So, clearly, the Magistrate thought it was entirely in order that I should be threatened by a lawyer – and my opponent in the matter in front of him – as long as it was not done inside his Courtroom. What is going on in our Courts?

As far as I can read into the letter allegedly sent to Judge Judd, there was no implied threat to life or property. And yet, he moved to challenge Mr Norman about the letter, without notice, in the Court.

Meanwhile, the judiciary and the legal regulatory bodies remain indifferent to actual death threats made to a litigant in person by a lawyer — and, indeed, deny requests to secure CCTV of the incident.

And what did Judge Judd do when Matt Norman told him about the threat made to him by the NAB's hired gun, Kevin Pringle, and the Supreme Court's Security Chief and courier stooge for the NAB, Graeme Spurr?

I’ll wager that Tony Mokbel, whose case was being heard in the Supreme Court at the same time as Matt’s, found himself getting a better class of Justice.

And yes, the Mokbel case IS linked to my case against the National Australia Bank, given that documents stolen from the office of solicitor Ross Delahunty, and subsequently from my own property, by the Law Institute of Victoria and then the NAB and McKean Park, include further Court and other files, which also include NAB documents detailing multi-million dollar loans and transactions to Mr Mokbel.

The Victorian Injustice System has a rancid odour these days.

I know only too well that the scales of Justice invariably weigh in favour of the better moneyed.

I often wonder about the blindfold that Justice wears. Perhaps she cannot see what is happening before her covered eyes. Or perhaps she simply doesn't want to see, for shame of those who act in her name.