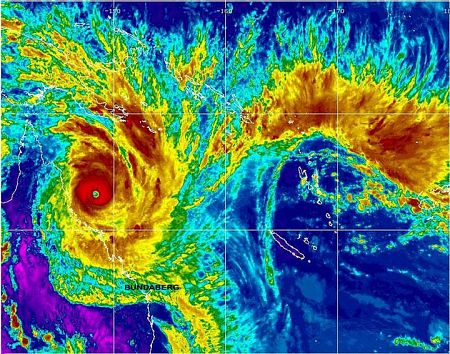 New IPCC report says maximum and minimum daily temperatures have increased in the world due to a build-up of greenhouse gas emissions, likely leading to more severe weather events — but don't expect to read that in The Australian. Managing editor David Donovan reports.

THE Intergovernmental Panel on Climate Change (IPCC) report released overnight said that maximum and minimum daily temperatures have increased in the world due to a build-up of greenhouse gas emissions.

The Summary for Policymakers of the Special Report on Managing the Risks of Extreme Events and Disasters to Advance Climate Change Adaptation (SREX) was unanimously approved by member governments of the IPCC at Kampala in Uganda.

Australia's public broadcaster, the ABC, reported the findings as follows:

An increase in heat waves is almost certain, while heavier rainfall, more floods, stronger cyclones, landslides and more intense droughts are likely across the globe this century as the Earth's climate warms, UN scientists say.

Qin Dahe, Co-chair of Working Group I – one of the two working groups responsible for the development and preparation of the report – said in a statement:

“There is high confidence that both maximum and minimum daily temperatures have increased on a global scale due to the increase of greenhouse gases.”

The other Co-chair of Working Group I, Thomas Stocker, said that hot days will increase by a factor of 10 and cyclones will become more violent.

"For the high emissions scenario, it is likely that the frequency of hot days will increase by a factor of 10 in most regions of the world", said Mr Stocker.

“Likewise, heavy precipitation will occur more often, and the wind speed of tropical cyclones will increase while their number will likely remain constant or decrease”.

On a global scale, the assessment says that it is virtually certain that hot days become even hotter and occur more often

The report did outline some areas of disagreement or issues upon which it was difficult to confidently assign risk.

“More intense and longer droughts are observed in some regions, but the assessment assigns medium confidence due to a lack of direct observations and a lack of agreement in the available scientific studies,” said Qin Dahe.

Most of the world’s press have reported the IPCC findings as a stark warning for national leaders and climate policy-makers, although the Australian press appeared to take a different early approach.

The UK public broadcaster, the BBC, began its online report of the findings  as follows:

The risk from extreme weather events is likely to increase if the world continues to warm, say scientists.

A report by the Intergovernmental Panel on Climate Change said it was "very likely" that emissions had led to an increase in daily maximum temperatures.

It added that emissions had also led some regions experiencing longer and more intense droughts.

The risk from extreme weather events is likely to increase if the world continues to warm, say scientists.

Across the Atlantic, respected US newspaper The Washington Post pointed to the IPC findings suggesting an increased risk of droughts and floods:

Climate change will make drought and flooding events like those that have battered the United States and other countries in 2011 more frequent, forcing nations to rethink the way they cope with disasters, according to a new report the U.N. Intergovernmental Panel on Climate Change issued Friday.

Leading US broadcast network MSNBC was even more gloomy:

Top international climate scientists and disaster experts meeting in Africa have a sharp message for the world's political leaders: Get ready for more dangerous and unpredictable weather caused by global warming.

In Australia, the Sydney Morning Herald took a subdued approach, with its article headed “Global warming adds to economic woes”.

Using the report to tie global warming to the global financial crisis, the Fairfax press wrote:

Rising temperatures are driving more frequent bouts of extreme weather which governments should heed with climate action even as the world economy teeters.

Global carbon emissions rose by a record amount last year rebounding on the heels of recession, showing the problem remains even when economies plummet.

Ignoring the mostly negative findings, The Australian then began its report by saying:

GREAT uncertainty remains about how much of an impact climate change will have on future extreme weather events, the world's leading climate scientists have found.

The IPCC chair, Rajendra Pachauri, said the summary should provide assistance in coping with increasing natural disasters as the result of climate change, which nevertheless will be erratic and difficult to predict.

“This summary for policymakers provides insights into how disaster risk management and adaptation may assist vulnerable communities to better cope with a changing climate in a world of inequalities,” said Mr Pachauri.

“It also underlines the complexity and the diversity of factors that are shaping human vulnerability to extremes — why for some communities and countries these can become disasters whereas for others they can be less severe,” he said.

Vicente Barros, the co-chair of Working Group II, said he hoped the report would provide a stimulus to policy-makers to renew their efforts to prevent climate change, saying that there were many options that had not yet been implemented that would help mitigate the likely effects.

“There are many options for decreasing risk. Some of these have been implemented, but many have not,” said Mr Barros

“The best options can provide benefits across a wide range of possible levels of climate change,” he added.

The IPCC’s Summary for Policymakers of the SREX is available at http://ipcc-wg2.gov/SREX and www.ipcc.ch.