WATCHING the Institute of Public Affairs (IPA) become appalled at the threat of fact checking coming to Australia has been one of this year’s more entertaining media experiences. 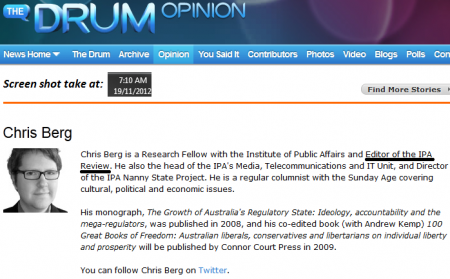 Writing on The Drum online last week, IPA research fellow and (according to his bio on The Drum*) editor of the IPA Review, Chris Berg claimed fact checking – that is, ensuring what is written is actually true – is


‘…appealing in principle. It is disappointing – even futile – in practice.’

Well, of course it is ― to the IPA. Its Review almost rivals The Australian for distortions and falsehoods. Almost. Its writers almost match Andrew Bolt for fabrications. Well, no, not really.

Berg is indignantly opposed to truth-telling becoming the accepted norm in Australian journalism and public life.


‘Fact checking is more common as a political attack than journalistic technique,’ he insisted. ‘It's just another weapon in the partisan's armoury. Smugly purporting to be on the side of “reality” is a fashionable way to hit your opponent.’

So, does this mean fact checking is a ‘weapon’ which has been used effectively by ‘opponents’ of the IPA and their anonymous bankrollers? Perhaps so.

Well, many observers believe fact checkers undermined the multi-billion dollar tilt at the US presidency by the Republicans earlier this month. Many US television commentators, print journalists and bloggers expressed dismay at the constant blatant distortions and fabrications by Republican candidates Mitt Romney and Paul Ryan.

Rachel Maddow highlighted the pure lies back in March, then in July, again in September and finally in October:

So did several others. Even pro-Republican Fox News called Romney and Ryan out on their multiple fabrications.

Steve Benen’s influential website meticulously documented Romney’s porkies throughout the 2012 presidential campaign. He ended up with a total of 917 by election day ― a tally that would make even Australia’s “Lying Rodent” blush.

Most commentators assess this to have been a factor in the huge win for President Obama. How significant it was, of course, impossible to measure.

More urgently for Australia’s IPA, recent focus on the lies of their pal, Opposition Leader Tony Abbott, has coincided with a dramatic fall in his approval rate to new record lows. Just coincidence? Again, hard to be certain. But the IPA is nervous.

In a bizarre rhetorical question, Berg suggests this:


‘…there's clearly frustration with journalism as it is practiced today: why not make its new duty to judge political untruths?’

New duty? Journalists judging whether politicians are lying or telling the truth? New to whom? The editor* of the IPA Review?


‘...how faddish and illusory the fact checking idea really is’.

Sure. Politicians always break commitments. Always have, always will. Sometimes through no fault of their own whatsoever, sometimes maliciously. But that is not the critical problem with politics, journalism and public commentary in Australia, Britain and the USA today.

Voters can surely distinguish between:


(a) aspirational predictions unfulfilled, such as Bob Hawke’s famous: “By 1990 no Australian child shall live in poverty”;

(b) specific promises which turn out impossible to deliver due to external factors, such as Julia Gillard’s carbon tax commitment stymied by the hung Parliament;

(c) promises jettisoned without any real pressure to do so such as John Howard’s  “No GST, never ever” commitment abandoned before the 1998 election; and


‘Anyway, how on earth could the press gallery fact check a prediction?’

Which is actually a fair question. They can’t. But hopeful predictions are not the issue. Commitments (a), (b) and (c), above, are thorny ethical issues. They certainly warrant scrutiny and condemnation where appropriate.

But they are nothing like the threat to political stability, social order, public trust and an informed electorate as is (d).

Fact checkers are required primarily for calling out lies — deliberate statements of falsehood, made knowingly by politicians, the media and public commentators.

Australia, the USA and Britain today are rife with fabricators.

Journalists lie about public figures, about climate change and about Aboriginal people.

The IPA routinely fabricates and distorts in its advocacy on behalf of its undisclosed clients on tobacco marketing, internet privacy, climate change, controls over shonky charities and many other matters.

These are profound challenges facing Australia, the USA and Britain. Fact checkers can help us deal with them.

* Despite his bio in The Drum, Chris Berg appears to be only a former editor of The IPA Review, with the current editor being James Paterson (see below). 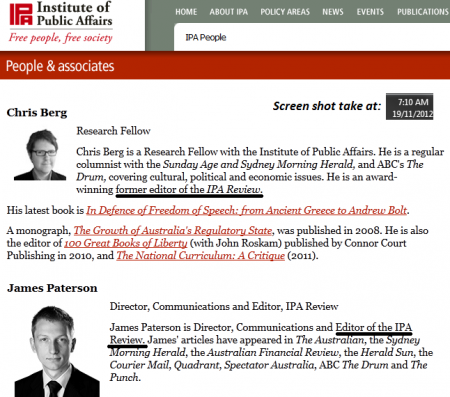