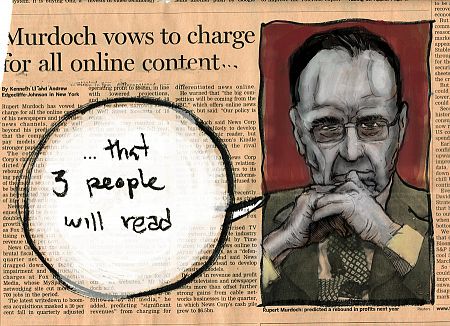 WOULD ANY SANE PERSON lightly throw away $2,600,000,000 ‒ two billion, six hundred million dollars in US currency ‒ of his shareholders money into a gamble that many people would see as doomed to failure. Surely only a man with huge self-confidence and an inbuilt narcissistic complex.

To a poker player, it would seem like a man betting on three kings, even with the knowledge that his opponent was holding four aces. He is starting to act like his namesake grandfather Rupert Greene.

Can anybody be reasonably sure that Keith Rupert Murdoch has not entirely lost his marbles?

Murdoch plans to throw this bucket of capital into the vast wasteland that is the dying newspaper industry.  He says he can revive the industry. He says he loves newspapers too much. He says he can keep alive an industry that everybody else knows is obsolete.

He doesn't love the newspapers at all. He loves the power they have given him for sixty years. That's what he wants to hang on to.

From last year's Leveson Inquiry through to the absurd front pages of his Australian newspapers last week, the world knows that Murdoch has prostituted his chosen profession as a newspaperman.

This money really has only one purpose: that is to prove that, to himself, an 82-year-old relic can retain the power to rule nations and international politics and to wreck people’s personal lives with obscene exposure of their private foibles.

It is hard to believe that the financial managers of his companies are still so terrified of him that they are unable to convince him that newspapers are doomed. What is even stranger is that News Corp shares went up by 2.1 per cent when his latest plan was announced. His shareholders must be still mesmerised by the past.

If his newspapers are not doomed, they have certainly lost most of their audience, all of their integrity and every atom of their invincibility and quality. I am referring here strictly to Murdoch newspapers. There are others, particularly regional papers in Australia, which may retain some level of viability.

The money grab will go entirely into rebuilding Murdoch’s failing newspapers in Britain, the US and Australia. It will come from the previously lucrative sources of his television and movie business, as he divides his company into two separate entities. His plan is to extract the cash from his Fox TV networks, pay TV and movie studios and pour it into his newspapers. But even these entities are not guaranteed safe, given the animosity he has aroused in Obama's USA.

What he has not considered is that the rapid changes in the habits of his customers over the last decades of 2012 and into the new era of 2013 may also signal the end of both movies and television as we have known it and seen it develop over 113 years.

Spending most of his life between a Park Avenue penthouse and a fleet of luxury yachts, and another fleet of private Boeing 747s, must be firm evidence that he has simply lost touch with the rest of the world.

Doesn't he realise that the internet is taking over from everything, daily news, music, advertising, and even including movies and TV? Has he never heard of the new cloudland of unlimited storage?

Recently, I had a phone call from an employee of Rupert’s son Lachlan, who owns the Channel 10 TV network in Australia — another company losing money faster than I am losing my hair.

This call was from an employee of young Lachlan Murdoch's movie CD rental business, begging me to renew my long discarded contract. I was able to tell him no thanks, that I have an upmarket PVR, stocked within its double terrabyte drive with about 240 good movies and documentaries, all downloaded entirely legally from free TV channels, with the commercial breaks pre-edited and all ready to watch whenever and wherever I feel the need.

That is just one tiny example of the revolution in home entertainment that is thundering across the planet.

Even pay TV, from which Murdoch has made huge profits in the past, is no longer the cash cow that it was as people realise that it is not worth paying for, unless you are in the overnight accommodation business.

As for sport, I am sick of what they call sport in this modern commercial age. It is not sport. It is uncontrolled mayhem performed by over-weight drug addled drunks and it is all about money, money, money, thanks to Rupert’s contribution to that industry.

It amazes me that Rupert, who once had the acumen to became a major player in yesterday’s world, cannot see what is clearly written on the wall of our future. All over the planet, change is the watchword and new diversions are coming to light day after day.

The era of this dinosaur is over, but it won't lie down and die.