The investigation into News Corp’s practices in the UK is likely to expose accounting and administrative issues with the potential to bankrupt the company.

IN AN ARTICLE I wrote for Independent Australia earlier this year and prior to the commencement of the London trials of the journalists and senior executives of what was then known as News International, I reported that a key element in the police investigations would need to be within the company’s accounting department.

The central point in my article was that staff who had paid out money to police officers or other government officials would not be using their own money. They would be either be reimbursed for payments made or the company would advance the payments to them.

Thus it would be the company itself, its senior management and perhaps even its shareholders who would be legally liable for improper payments, whether bribes to policemen or payment to others for news or photographs. Reporters were merely agents of the transaction.

I also outlined the procedures I followed when I was a managing director or general manager of News Limited papers in Melbourne, Darwin and Brisbane at various times. Expense accounts were regularly checked by management staff and any peculiarities needed to be explained.

I was with Rupert Murdoch himself in his office at the Sydney Daily Mirror when he sent for a pile of current expense chits and demonstrated how he went through them item by item.

I was also with him on many occasions when he tore parking infringement notices from the windscreens of company cars and threw the notices into the gutter. It was an even clearer demonstration to me that he considered himself above the law — any law!

When I explained to him that unpaid infringements would be subject to double the original charge, he simple shrugged and went on doing it.

It is clear now that the investigators in London have identified the significance of journalists’ expense accounts and that the Crown prosecutors will be producing evidence to identify the sources who received such payments, as well as the journalists who signed to pay out or to be compensated for the payments and the company executives empowered to authorise the payments.

I wrote of these matters from experience as an executive of News Limited in Australia, during which time I personally investigated and authorised expenses made by the staff members in the course of their duties.

This is not a system which applies only to newspapers. Every business operates successfully only by maintaining a close and detailed attendance to all its expenditures.

It is this simple fact, which I personally believe will bring down Rupert Murdoch and place News UK into bankruptcy when the complete evidence is eventually placed before the jury next year.

Mr Steven Brown, a Sydney businessman and a former member of the media has been examining the matter in some detail. Mr Brown operates websites named www.sydney.tv and www.brisbane.tv as a public service operation supplying a wide range of information.

He has offered this information to Independent Australia and the information is dynamite. It appears to have been overlooked entirely by all the sources supplying daily reports on the progress of the trials.

British newspapers, of course, would be treading warily in the matter because the legal precedents established in the Murdoch trials could affect them all. Australian newspapers owned by Rupert Murdoch are equally reluctant to expose some of their inner workings.

Steven Brown has written to the General Counsel of News UK, Paul Chinnery; Richard Brookes, of the News UK Press Office; and to Ashley Huston, the senior vice-president of Corporate Communications, seeking information about News UK’s accounting, compliance and legal procedures (letter displayed below). He has also written to the Crown Prosecution Service, organiosed crime division (letter displayed above). 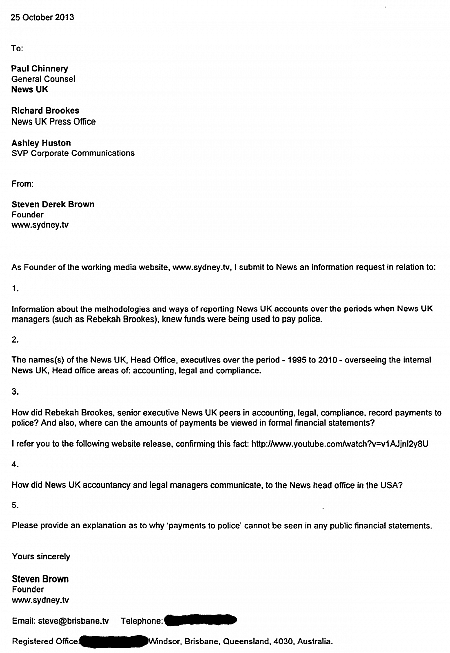 Among other questions, he has asked about senior executives, including Rebekah Brooks, and their management duties, and about where details and amounts of money are available in financial statements.

Mr Brown points out that company expenses have to be typically filled out and approved and, if approved, have also to be authorised and approved by an editor or some other level of senior management.

He adds his own opinion that the Brooks trial in itself has the potential to reveal accounting, legal and compliance issues related to News UK and News USA. He does not refer to accounting practices at News Australia. He adds that no financial statements show viewable reference to payments to police in the UK.

Other than the above, further details of this correspondence cannot be published at this time.