The Abbott Government’s new security and counter-terrorism laws represent the most concerted attack on journalism in the modern era, writes Professor Mark Pearson from Griffith University via The Conversation.

The Abbott Government’s latest tranches of national security and counter-terrorism laws represent the greatest attack on the Fourth Estate function of journalism in the modern era. They are worse than the Gillard Government’s failed attempts to regulate the press.

Unlike most other Western democracies, Australia has no constitutional instrument protecting free expression as a human right. Few politicians can resist the temptation to control the flow of information if the law permits.

Here are five reasons that this latest move is damaging the democratic cornerstone of press freedom.

1. It is legislative over-reach

These laws go too far and inflict unnecessary collateral damage on journalism.

Since the 2001 terrorism attacks on the US, Australia has passed more than 50 security laws, many of which have impacts on the work of journalists. (State and territory governments have enacted scores more.)

Despite some in-built “sunset clauses” in the legislation, some military experts have predicted a 100-year war on jihadi extremism, so ongoing renewals are likely.

Australians have been given remarkably little explanation of why most of the new laws are needed. Even those that seem well founded could be amended to include a clear public interest, free expression or journalism exemption.

Existing laws worked well enough to enable the arrests and convictions of at least 15 people on terrorism charges in Australia since 2003. These laws allowed a series of operations this year including one involving more than 800 police and an unknown number of ASIO agents.

Federal Police powers were strong enough to obtain warrants to raid Channel Seven headquarters in Sydney in February. Officers seized computers over an unsubstantiated allegation that Seven had paid for an interview with convicted drug smuggler Schapelle Corby. The AFP later apologised.

2. It gags reportage of a key public issue

National security and counter-terrorism activity is a major Commonwealth budget item. The 2014-15 budget estimates allocate more than $4 billion a year to public order and safety. Since the budget, counter-terrorism has received an extra $630 million over four years, including almost $200 million for ASIO.

Such a sizable area of government merits maximum media scrutiny and transparency. It is the media’s role to act as a watchdog on how well governments perform all their duties, including security. In a democracy, that means striking a reasonable balance between preserving the integrity of intelligence and police operations and allowing enough information flow to permit scrutiny and informed public debate.

The responses to questions to the attorney-general from the ABC’s Media Watch last week raised more issues than they answered about the ability to report national security news under the new Section 35P of the ASIO Act (1979). It was said the legislation did not “target journalists”. Yet it criminalises any disclosure, whether deliberate or not, of information about a “Special Intelligence Operation” (SIO).

That is basically what journalists do — disclose information. Just to do so in this case carries a five-year jail term, or ten years if they jeopardise the operation.

Remarkably, a journalist would have to phone the ASIO media office hotline to ask whether an operation that had come to their attention was deemed a SIO. The Attorney-General’s assurances that journalists are not targeted might well be sincere, but the legislation now sits there for any future government to apply against anyone who dares to mention such an operation.

That is quite a chill factor. One can imagine that ASIO media hotline getting considerable traffic in coming months and years. Journalists, bloggers and social media users will have to phone it to see whether they can safely report or post a status about an unfolding event.

3. It compromises the separation of powers

A significant change was made between the second and third readings in parliament so that it became the attorney-general, not the ASIO director-general, who authorises a SIO on request from any member of ASIO (Section 35B). This raises important separation of powers issues, particularly in light of recent government information policies. Only this year, a court suppression order was granted on the government’s application

Successive governments’ restrictions on media access to detention centres and Immigration Minister Scott Morrison’s refusal to give details about “current or potential future on-water operations” involving asylum seekers are other examples of denying the public information on crucial issues that Australians have a right to know about.

Journalists’ exposure of cover-ups by politicians of all colours at all levels of government have dominated the Walkley Awards for decades. Their revelations have triggered inquiries like Queensland’s Fitzgerald Inquiry and New South Wales' recent ICAC hearings.

These new gags give current and future governments the opportunity to avoid such scrutiny by claiming national security is involved.

4. It spells the end for the confidential source

The effects of s35P on disclosures, surveillance powers, including access to all of Australia’s IT networks with a single warrant and metadata storage and access obligations, effectively sound the death knell for the whistleblower as a confidential source in this country. When combined with data sharing between government agencies, CCTV surveillance and device and social media tracking, it means a source like Watergate’s 'Deep Throat' can no longer deal with journalists without a genuine fear of detection.

The shame is that this comes just as journalists have been celebrating the effectiveness of new shield laws in other reporting contexts. Sadly, national security is a standard exemption to shield law protection.

The Counter-Terrorism Legislation Amendment (Foreign Fighters) Bill 2014 now before Parliament does offer a journalism exemption to the 10-year jail penalty for entering a declared terrorism area in a foreign country, which is indeed what war correspondents sometimes do. However, that exemption requires the journalist to prove what they were doing. And that may betray the identity of their sources.

The exemption applies strictly to a 'person working in a professional capacity as a journalist' (or assisting).

This raises the recurring question of what defines a “journalist” in this new era.

The issue arises time and again as more people practise what we know as journalism. Bloggers, students, academics and “citizen journalists” are now valuable sources of information for the public. Yet many of them are not necessarily working in a professional capacity as a journalist.

Thus the new law would privilege the 20th-century definition of “journalist” and is a form of licensing. 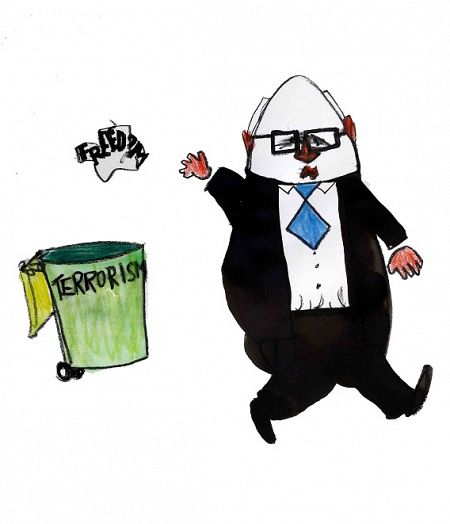