EDITORIAL EXCERPT: ABC rolls over and Media Watch does the vampire squid

For the second week in a row, ABC Media Watch has misled the Australian public — this time whitewashing Turnbull Government interference in the editorial policies of the public broadcaster.

‘The yellow press lies as a matter of course, without hesitating or looking back. Newspapers like The Times or Le Temps speak the truth on all unimportant and inconsequential occasions, so that they can deceive the public with all the requisite authority when necessary.’

THERE ARE many ways to influence public opinion, the simplest being merely to misinform. For the Murdoch-owned media, misinforming the public is such a regular routine, it is almost a surprise when a story appears that does not have some crucial element of truth misstated, skewed or absent altogether. But most of the public are not dolts and see it for what it is ‒ thinly veiled propaganda ‒ which lessens its effect.

A broadcaster like the ABC, however, does not lie all that often at all. It is, for the most part, relatively fair and honest, and so, when it does deceive, its canards quickly attain the status of fact. Which makes its deceptions even more insidious than Murdoch’s.

This is even more so when the ABC organ supposedly dedicated to exposing media dishonesty itself misreports, such as by covering up a mainstream media cover-up, or refusing to hold its management to account for whitewashing the truth after yielding to political pressure.

ABC Media Watch has done both these things in the past two weeks. First, with its refusal to call-out the initial mainstream media cover-up of the Barnaby affair, as you read about here last week, and, secondly, with its endorsement of ABC management’s removal and redaction of articles critical of the Turnbull Government’s $65 billion corporate tax cuts.

Tonight on #MediaWatch - Taxing times at the ABC.
Emma Alberici’s tax reports - Our verdict on the latest ABC stuff-up.
9:15 on @ABCTV and @ABCiview pic.twitter.com/T2QSwFLNt2

In this week’s Media Watch on Monday (19/2/18), host Paul Barry again whitewashed the truth and misinformed. This time, with respect to two articles by Emma Alberici published last week on the ABC — one a news and one an analysis piece.

Alberici had argued, persuasively, and with 25 years’ worth of experience as an economics and finance journalist, that the $65 billion big business tax cuts were not good policy. That the evidence around the world showed that cutting taxes for business did not lead to greater “jobs and growth” — that, in fact, it increased inequality.

The ABC censored and then reposted Alberici’s news piece, and completely removed her analysis from its website. Its grounds, the ABC claimed, were that the articles did not meet the broadcaster’s editorial standards. It did so after PM Turnbull, Communications Minister Mitch Fifield and Treasurer Scott Morrison all complained loudly and vociferously — both publicly and direct to ABC management.

[You can still read the original news piece in the Google cache HERE and the analysis piece HERE.]

The ABC claimed its decision to pull the article down had been made independently by senior management, due to “editorial problems” related to the broadcaster’s policies differentiating factual reporting from analysis and opinion. As far as most leading economists were concerned, however – and as, indeed, as Media Watch conceded – both articles were entirely factually correct and reflected what they had been saying about trickledown economics for years — that it doesn’t work and has never worked.

But this is uncomfortable economic heresy for the Government, which is desperate to get its big business and banking cronies their payoff for supporting the Liberal Party. So, with voters sceptical about the big business tax cuts about to hit Parliament, Alberici’s economic heresy had to be hidden ‒ and quick! ‒ and so it was.

ABC MANAGEMENT AND MEDIA WATCH ONLY ROLL ONE WAY

Pressure was brought to bear on the ABC and its management caved, as it has done so many times before in recent years. One prominent example being when management forced out ABC tech editor Nick Ross for writing factual articles about Turnbull’s ill-conceived NBN plan.

On the other side of the coin, ABC management resolutely refused to correct or remove factually incorrect articles by former ABC political editor Chris Uhlmann after he incorrectly blamed renewables for last year’s South Australian blackout. It let these articles and Uhlmann's opinionated diatribes against sustainable energy stand despite scores of complaints from progressive politicians and the public. Uhlmann’s line, of course, was also that of the Turnbull Government, something that seems to make all the difference, as far as they are concerned.

But that was not how Media Watch represented events — then or now. Indeed, Media Watch condemned Nick Ross and cravenly endorsed ABC management’s actions, skimming over the matter of political interference. As for the Uhlmann imbroglio, it just completely ignored the issue altogether.

The ABC, of course, knows when to roll over and onto which side. Good boy, Media Watch!

Perhaps most disturbingly, Media Watch directly misled viewers about a line used by Emma Alberici in her piece to describe Goldman Sachs:

‘The world’s most powerful investment bank is a great vampire squid wrapped around the face of humanity, relentlessly jamming its blood funnel into anything that smells like money.’

This line was displayed as a graphic and read out by a female actress. 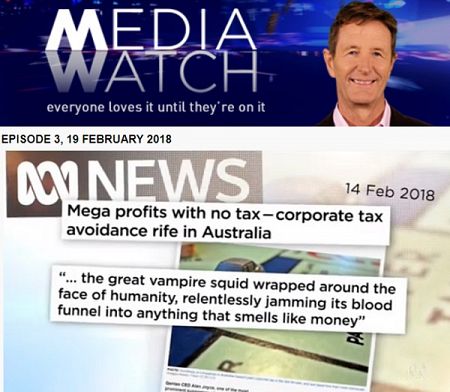 What Media Watch failed to mention was that Alberici included this sentence in her piece as a clearly marked quote from Rolling Stone journalist Matt Taibbi. Instead, they attributed this remark to Alberici personally — a move seemingly designed to support the argument she was biased. This was simply false and misleading, as Helen Razer also noted.

It should also be noted that Malcolm Turnbull once ran Goldman Sachs' operations in Australia. Perhaps he took offence at Alberici recycling Taibbi’s famous quote?

Sadly, though many refuse to believe it, the ABC is, like the rest of the mainstream media, depressingly prone to dishonesty, covering up the truth and subtly assisting the conservative side of politics. The only difference is that, unlike the Murdoch Press, it doesn’t do it overtly or all the time. Which makes its lies all the more believable and effective.

This is only half the story! The rest of this editorial, originally published as part of the Independent Australia weekly subscribers' newsletter, may be read in the IA members only area, available to all subscribers. It takes less a minute to subscribe to IA and costs as little as $5 a month or $50 a year — a tiny sum for quality journalism and many other great extras!