Recent cases of misleading and deceptive conduct show an increased role for scientific evidence in this area of consumer law, writes Brooke Murphy.

RECENTLY, a number of companies have made headlines for misleading and deceptive conduct claims.

Last year, Nurofen producer Reckitt Benckiser was ordered to cough up $1.7 million in penalties for a range of misleading "targeted relief" painkiller products, which all contained the same ingredients.

More recently, two companies have landed in hot water over claims that their “flushable” wipes do not disintegrate.

Crown Casino and a poker machine manufacturer are also facing a potential claim that poker machines are misleading and deceptive.

What do these misleading and deceptive conduct claims have in common? They all rely on scientific evidence.

What is "misleading and deceptive" conduct?

Section 18 of the Australian Consumer Law prohibits misleading and deceptive conduct in trade and commerce:

'A person must not, in trade or commerce, engage in conduct that is misleading or deceptive or is likely to mislead or deceive.'

For conduct to be “misleading” or “deceptive,” it must be proved that the conduct actually caused error, or is likely to do so. It is not enough for the conduct to cause confusion — there must be a real chance of misleading or deceiving. “Conduct” can include representations made in advertisements, promotions, and packaging. It does not matter whether the business intended to mislead or deceive.

The ACCC have launched proceedings against the Federal Court, claiming that “flushable” personal hygiene wipes should not actually be flushed down toilets.

According to ACCC chairman Rod Simms:

‘These products did not … disintegrate like toilet paper when flushed.’

A photo has been circulating in news stories showing the difference between how toilet paper and “flushable’” wipes disintegrate in water (see the "hero" image at the top of this article). In the far left jar, the toilet paper has completely disintegrated. The two jars on the right show “flushable” wipes which remain unchanged in the water. Why is it important that “flushable” products disintegrate?

As noted by Mr Simms:

'Australian water authorities face significant problems when non-suitable products are flushed down the toilet as they contribute to blockages to household and municipal sewerage systems.'

The claim follows news coverage of school student Harry Wood’s award winning science experiment: 'Wipes vs Paper: Are flushable wipes what they say they are?'.

At 12 years old, Harry made a pithy criticism of “flushable” wipes:

"Flushable wipes will flush, but environmentally they are a disaster as they will not biodegrade easily."

Choice has also demanded the removal of "flushable" wipes from supermarket shelves.

They are not seeking compensation, but a declaration that a particular poker machine game called Dolphin Treasure breaches the Australian Consumer Law. The aim of the case is to bring about clear warnings, similar to those on cigarette packets.

It is expected that the case will draw on recent Canadian research, indicating that the flashing symbols and music which compliment 'losses disguised as wins' activate similar arousal levels in beginner gamblers as real wins. 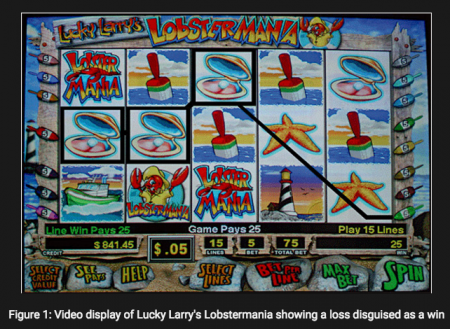 This means that the machines reinforce net wins in the same way they reinforce "wins" where the amount won is less than the spin wager, amounting in a net loss.

The study found that 'losses disguised as wins' were more arousing than regular losses, despite the fact that both resulted in losses.

At this stage, it is difficult to predict whether the case will be successful. The concise legislative drafting of the misleading and deceptive prohibition understates the complexity of this area of the law.

Using the Australian Consumer Law for social and environmental reform

These cases show how scientific research can be used to inform the application of legal tests.

Scientific evidence is also being used to test health claims made in marketing of milk products.

Legal battle between a2 Milk and Dairy Farmers' Lion turns to science. https://t.co/VMdCHaq9Fr

Following these cases, there could be an increased role of scientific evidence in this area of consumer law. It is interesting to see the misleading and deceptive prohibition being used to drive social and environmental reforms. Only time will tell whether the misleading and deceptive conduct prohibition is the appropriate vehicle for these changes.

Brooke Murphy is a lawyer completing her PhD on the potential for fiduciary law to address non-economic interests, such as sexual autonomy. You can follow Brooke on Twitter @brooke___murphy.

@Warrigal150 @RitaPanahi @brooke_murphy This is a small sample. She explained quite a few things. Check her Twitter feed for more. pic.twitter.com/D9zM5oijoD

Review: ‘The Subtle Art of Not Giving a F*ck'

Green Day biography on my bookshelf: ‘Nobody Likes You’

12 August 2017, 2:00pm Brooke Murphy reviews Nobody Likes You, a book about one of the biggest punk bands ...
Join the conversation
comments powered by Disqus
News updates