Rupert Murdoch’s denials about knowing about phone hacking at his British papers look even more implausible after a professional phone hacker drops a bombshell at the trial, reports Rodney E. Lever.

A PROFESSIONAL PHONE HACKER has dropped a bombshell into the trial of the journalists employed at Rupert Murdoch’s British newspapers.

Daniel Evans was a reporter on the News of the World and the Sunday Mirror newspapers. He is the first journalist in the first trial to confess openly to his hacking work, effectively offering his information as Queen’s Evidence, allowing him to avoid prosecution.

Hacking into private telephones was a “fairly standard tool” tool used in British newspapers, he told the jury in the Old Bailey courtroom.

He had been taught the tricks of the hacking trade by another journalist.

The News of the World had made several attempts to persuade Evans to leave the Sunday Mirror and work for Rupert Murdoch.

Murdoch’s News of the World editor, Andy Coulson, invited him to breakfast at a London Hotel. He told Coulson he had learned all the secrets of how to intercept various forms of private communications.

“I have all this information stored in my head,” he said.

He told Coulson how he had a long list of hacking targets, storing their pin numbers in his private files.

“I can do anything with any phone.”

Coulson made him an offer he could not refuse and he switched from the Sunday Mirror to the News of the World. From then on he spent every working day hacking into phones for the Murdoch newspapers.

Coulson went on to become the communications director in the office of British Prime Minister David Cameron.

Daniel Evans’ courtroom evidence thrown a new light on Rupert Murdoch’s continued refusal to admit he had any knowledge of what was going on inside his newspapers.

The evidence building up step by step in the Old Bailey courtroom is ridiculing Murdoch’s claims of innocence and ignorance. There are still months to go before all the charges against company employees and heard and more is bound to come out.

The evidence given by Daniel Evans leaves another significant hole in Murdoch’s claims that nobody ever told him anything. 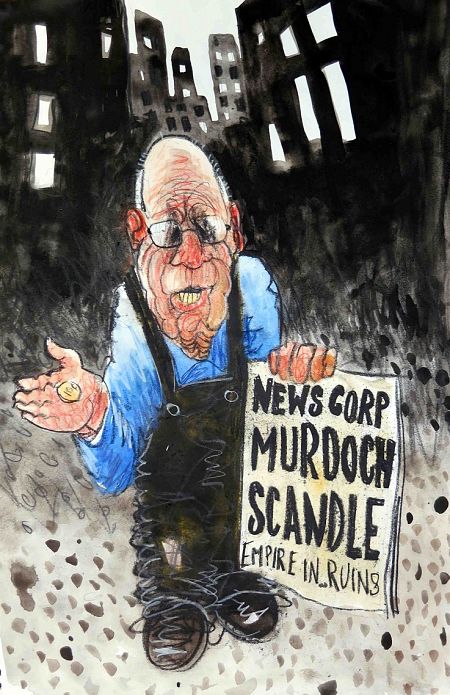