The Australian Federal Police may be called in to investigate claims that a secret unit in Rupert Murdoch's News Corporation promoted piracy in the local pay television industry and around the globe, writes Bruce Arnold.

The Australian Financial Review has published allegations that a “secret unit” within Rupert Murdoch’s News Corporation undertook a program of piracy against pay television operators in a bid to damage them as News sought to take control of the industry.

In an exclusive which follows similar allegations by BBC program Panorama that News sought to derail ONdigital, a pay TV rival to News' Sky TV, AFR journalist Neil Chenoweth alleges a security group was established within News subsidiary NDS that “facilitated and encouraged piracy” to sabotage pay TV rivals, including fostering a pay television smart card blackmarket that the story claims cost operators millions of dollars. Foxtel, which is 25% owned by New Corp was also the victim of piracy, the story alleges.

The story is the result of a four year investigation by Chenoweth and features 14,400 emails which the AFR says are between “NDS Operational Security employees and others, some of whom were working for NDS as paid informants".

News Corporation has previously and consistently denied any role in fostering pay TV piracy. Foxtel has also denied any involvement in promoting piracy and says it has a strong record of combating the problem. It is currently in the process of acquiring satellite broadcaster, Austar.

However, a spokeswoman for Federal Communications Minister Stephen Conroy has described the allegations as “serious” and called for them to be referred to the Australian Federal police.

Industrial espionage has occurred as long as we’ve had industry. US entrepreneurs – subsequently hailed as national heroes – visited Europe in the early days of the republic to acquire proprietary knowledge without payment or permission.

Industry regulators typically don’t get involved in industrial espionage cases and traditionally, governments have left private sector entities (commercial enterprises, universities, even individuals) to look after themselves if injured by industrial espionage. Action like this has involved litigation and some large but often poorly-publicised settlements. 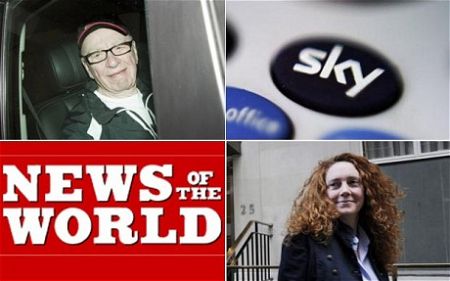 So it is interesting that the Communications Minister is now calling for police action.

Unauthorised access to electronic networks and illicit modification of databases are criminal offences under Commonwealth law. Globally the sanctions against those offences are becoming tougher – and governments are agreeing to cooperate across borders in law enforcement – through international agreements such as the Council of Europe Cybercrime Convention considered in the Australian Parliament last year.

People have argued that digital “piracy” offences are nonsensical because cyberspace is borderless. The reality is that civil and criminal enforcement is difficult but not impossible. News Corp, along with most multinational enterprises, is firmly grounded … it has assets in Australia, the US and the UK and is therefore subject to law in those jurisdictions.

Penalties for cybercrime potentially involve imprisonment. Just as importantly, News and senior executives face fundamental reputational damage if the allegations are proven and can be tracked to the top.

That damage is likely to be far greater than any compensation awarded if the allegations get into court or the derisory penalties that would be awarded by an unprecedentedly energetic regulator such as the Australian Communications and Media Authority (ACMA).

Action by ACMA is unlikely, given that News does not appear to have broken Australian media/telecommunications law. We might ask whether the Minister’s interest in policing will extend to corporations outside the media sector. Has the tabloid culture of “trial by headline” been embraced by the Government, with Conroy proving to be Rupert’s most devoted pupil?

While industrial espionage is a fact of life, industrial sabotage – for instance, contaminating a competitor’s product, corrupting a database, spreading damaging rumours about a competitor – is rarer but does occur.

On occasion we’ve seen high profile litigation and compensation, for example a large settlement by American Express over a smear campaign against banker Edmond Safra.

So what about News? News has faced allegations over industrial espionage involving pay television for at least a decade, for example Echostar (US) and BSB (UK). Allegations are easy to make; harder to prove in court. It is important to note that when such claims went to court News was not found guilty.

Was News responsible for the demise – or near demise – of competitors in the UK, US and Australia? It should be noted that academic and industry research over two decades indicates the problems experienced by the defunct or ailing television networks were primarily attributable to poor management, poor marketing and inadequate capitalisation.

Action by News or its agents may or may not have exacerbated woes, but hyperbole about the impact of “piracy” or “industrial sabotage” so far hasn’t been substantiated.

Meanwhile in the UK, News Corp continues to deal with the ongoing phone hacking scandal which caused the closure of its tabloid News of the World. One conclusion from hearings by the Leveson Inquiry is that the big media groups have a culture of “fast and loose” that hasn’t been effectively inhibited through internal self-regulation or through regulation by industry bodies.

We might ask whether greater media regulation is indeed appropriate.

In Australia, the Finkelstein Inquiry seems more relevant by the day and should not be allowed to sink into oblivion as the pirate ships sail on.