Advertising and the Budget: The $5 billion tax break to make us unhappy

Australians are set to provide a $4.8 billion tax benefit this year to companies to sell us things we mostly don’t want and don't need, writes Tim Hollo.

THEY SAY, with budgets, the devil is in the detail — and it takes weeks to find.

But there’s one huge tax break which we won’t find as we’re poring over the papers — because it isn’t mentioned.

The long-standing but completely ignored 100% tax break for expenditure on advertising means that, according to the Green Institute’s calculations, this year alone, we Australian citizens are set to contribute some $4.8 billion to companies to sell us things we usually don’t want or need. I say 'according to our calculations' because, astonishingly, the Australian Taxation Office doesn’t even collect the figures for this huge foregone revenue. We have estimated it from the total $16 billion ad spend in Australia projected for 2017.

A corporate subsidy of this scale should be examined, regardless of what it is for, to make sure there is good public policy reasoning for maintaining it. $4.8 billion could go a long way to making life better for people doing it tough, or protecting our precious environment. It is, according to recent ACOSS figures, 40% of total unemployment and sickness benefits for last year, 60% of total support to carers, and one- and-a-half times total student payments. It’s also substantially higher than Australia’s total foreign aid budget, which was cruelly slashed yet again this year.

But exactly what is this tax break supporting?

Most of us find advertising annoying and intrusive, at a minimum, when it pops up on our screen, obscures our view out of the bus window, or flashes at us as we drive past. But it goes far deeper than that. 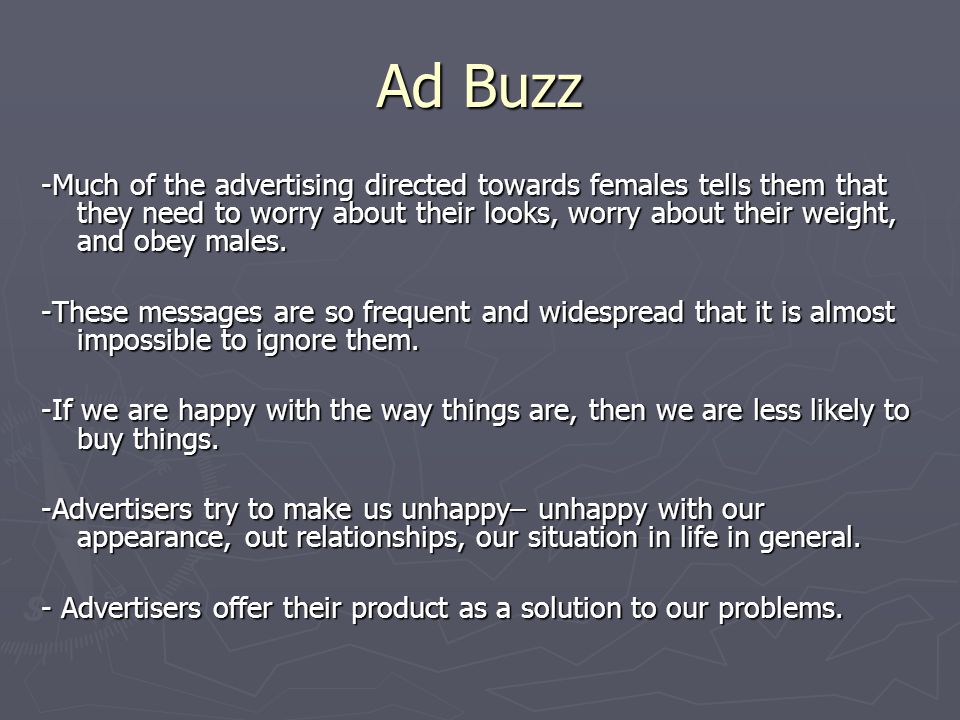 Here is how Nancy Shaley, president of the Shaley Agency, describes her own profession:

“Advertising at its best is making people feel that, without their product, you’re a loser.”

“Of course advertising makes us unhappy. There’s too much of it; we can’t screen it out and its premise is to promote extrinsic value — happiness being intrinsic.”

“... the true essence of advertising is to make you want more. It is designed to make you restless, leaving little room for contentment.”

But wait, there’s more! What do ads do to our society?

One of the early 20th century pioneers of marketing psychology was Edward Bernays, a nephew and keen student of Sigmund Freud. In his book, entitled Propaganda, he wrote approvingly of the role of advertising in manipulating public opinion to drive consumption as a mechanism for keeping a population 'more docile and less subversive', more easily governable. More recently, former ad executive Greg Foyster described the result of advertising as a “culture of discontent”.

Much of the in depth psychological research backing up these conclusions has been collated by Tim Kasser in his book, The High Price of Materialism. Kasser’s own research and that of the many others he cites, shows a clear link between exposure to advertising and increased materialism, which in turn is linked to higher rates of depression, interpersonal violence and antisocial behaviour.

One of the brains behind the Common Cause framework, Kasser describes how advertising emphasises extrinsic values such as wealth and status. It has been repeatedly demonstrated, by Kasser and others, that the more we are exposed to such extrinsic values, the more they suppress intrinsic values that include care for others, sense of community and care for the environment.

Importantly, this psychological effect takes place regardless of the attention paid to the ads and regardless of the values directly expressed by the ads. Even ads that express intrinsic values, such as positive community life or love of nature, are likely to end up activating extrinsic values when their final message is that those values are only attainable through purchase of a particular product or experience.

It’s not as though we even like advertising. According to last year’s Grey’s Advertising study, 79% of Australians agree with the statement that there is too much advertising and 73% believe that advertising can’t be trusted.

There's too much advertising (Image via eyeonaustralia.com.au)

Previous studies have found that 8 out of 10 Australians feel that advertising bombards them with useless information, two thirds think it is out of touch with economic realities and over 80% feel that it demonstrates an unrealistic depiction of Australia’s homes and home life.

Trust in advertising is low (Image via eyeonaustralia.com.au)

The fact that around half of us use some form of adblocker on our computers and devices backs this up.

But it’s supremely difficult to block advertising out of our lives. Its very ubiquity makes the individual ads and their content less relevant.

One company, Capital Outdoor, proudly declares of their product:

'Outdoor advertising… incorporates your targeted branding message into the everyday landscape of commuters and becomes part of the very fabric of the living and working environment where it is placed.'

This is part of a deliberate and long term strategy to mould cultural norms around consumerism.

In 1955, U.S. retail analyst Victor Lebow wrote in the Journal of Retailing:

Advertising is designed to condition us to want more, and it is this physical, financial, psychological, emotional and chemical conditioning, which we are all supporting through a tax break we don’t even measure.

Instead of increasing support for our most vulnerable people, or cleaning our air and water, we are all paying to make ourselves care less and less about these precious human values. No wonder governments can get away with ever harsher policies like random drug testing and doubling the wait for income support, and still call the Budget “fair”.

Tim Hollo is executive director of the The Green Institute. You can follow Tim on Twitter @TimHollo.

Australian politics a mad parody of Seinfeld: No democracy for you!

Advertising and the Budget: The $5 billion tax break to make us unhappy

18 May 2017, 5:00pm Australians will provide a $4.8 billion tax benefit this year to companies to sell ...
Join the conversation
comments powered by Disqus
News updates